WEST VALLEY CITY — Following widespread criticism of the West Valley City Police Department's handling of the Susan Powell case, city officials have announced they will no longer speak publicly about the investigation.

"We appreciate the briefing we've received from staff today," Winder said following the meeting. "Due to an ongoing investigation, as elected officials, we won't be making any more comments on this matter."

Due to an ongoing investigation, as elected officials, we won't be making any more comments on this matter.

City spokesman Aaron Crim said the City Council closed the meeting to the public because it dealt with "reasonably imminent litigation."

Nielsen and the police department have been under increased public scrutiny since Friday, when search warrants were unsealed that outlined new details about what police knew within the first three months of the West Valley City mother's disappearance in December 2009.

Susan Powell's family, friends and others have questioned why Josh Powell — Susan's husband and the only person of interest named in the woman's disappearance — was never arrested.

Josh Powell took his own life and those of his two children on Feb. 5 in Washington state.

Evidence outlined in the warrants include Susan's blood being found on the floor next to a couch in the West Valley City home — a couch that had recently been cleaned and had fans blowing on it to dry it.

There were also notes and letters from Susan that indicated she feared that Josh Powell might harm her, indicating that if she died, her death might not be an accident. One of the couple's children also told people that he went camping with his mother and father but his mother didn't come home, according to the warrants. 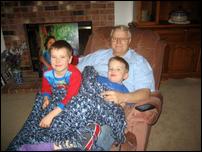 Proposed 'Charlie and Braden' bill could have big impact in Wash.

A proposed bill to be introduced in Washington state this week will honor the lives of Charlie and Braden Powell, and the impact could be big as evidenced by a similarly conceived Utah Law.

Other details revealed included that Susan's cellphone was found in Josh Powell's car with the SIM card missing; a tarp, gas can, shovel and blanket in Josh's car; and that he put 800 miles on a rental car in two days after Susan's disappearance.

Nielsen defended his department's handling of the case Monday, saying, "If we could have arrested him, we would have."

Pierce County, Wash., prosecutor Mark Lindquist has said he was aware of enough evidence for him to file charges against Josh Powell if it had been up to his office.

A spokesman for the Pierce County Sheriff's Office said his detectives would have arrested Powell long ago if it had been their case.

Lohra Miller, who was Salt Lake County's district attorney for about a year after Susan Powell disappeared, has said her office worked with West Valley police on the case but never formally considered filing criminal charges against Josh Powell because no body was found.