SALT LAKE CITY — The shooting of a man in front of a downtown Salt Lake McDonald's by an undercover Salt Lake drug officer was not legally justified, the Salt Lake County district attorney ruled.

It's the third officer-involved shooting determined to be unjustified in Salt Lake County in less than a year.

The Salt Lake County District Attorney's Office released the results of two officer-involved shootings Thursday. In another critical incident review, three West Valley police officers were cleared of shooting and killing 49-year-old Kent Ashworth after he showed a handgun on the street at 2805 S. 3600 West in front of the West Valley City Public Works Department building on Dec. 29, 2011.

On Oct. 28, 2011, Dennzel Davis, 19, was shot by a plain clothes Conrad in the parking lot of McDonald's, 210 W. 500 South. Police said Davis was the subject of an ongoing drug investigation. He was shot in the stomach and was still inside his vehicle when he was hit.

His vehicle was left with its rear backed up to the curb next to the building, with two bullet holes in the windshield and the side passenger window shot out.

Davis was hospitalized for several weeks and booked into the Salt Lake County Jail for investigation of an unrelated count of exploiting prostitution, a second- degree felony.

Since Sim Gill became district attorney 15 months ago, he has had to review 19 incidents of officers firing their weapons. Two other cases he's reviewed have been deemed legally unjustified.

Former West Valley officer James Cardon was writing a traffic ticket on May 24, 2011, near 3500 South and 5275 West when another vehicle came up too fast on the stopped traffic, swerved to avoid hitting other vehicles and went into a front yard, hitting a fence. 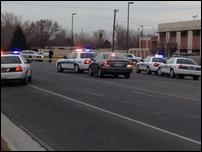 That shooting was determined to be unjustified. Cardon, who has since resigned from the department, was charged earlier this month in 3rd District Court with reckless endangerment, a class A misdemeanor, which is punishable by up to one year in jail.

Salt Lake police officer Matthew Giles was also determined to be unjustified in the use of deadly force. But Gill declined to file any criminal charges against him.

On May 8, 2011, Giles fired eight times at a juvenile in a stolen car attempting to flee police near 1600 West and 400 South. The teen had already purposely rammed a police car in an attempt to escape.

Giles told prosecutors he feared for his life as the fleeing car sped toward him, so he fired his weapon. Logistically, however, the district attorney's office determined it would have been impossible for the officer to fire as many times as he did if everything happened the way he claimed.

The officer's statements and the factual evidence from the case did not match, and Gill determined the shooting was not legally justified.

Every time a law enforcer along the Wasatch Front fires their service weapon, the Salt Lake County District Attorney's Office is required to conduct a review. Since Gill has taken office, he has had to review 19 incidents: two in 2010, 14 in 2011 and three in 2012. Not all of those incidents resulted in someone being shot.

A review of the officer-involved shooting death of 15- year-old Sean Morrison on March 18 by Unified police officers was still pending Thursday.