SALT LAKE CITY — Fraud, deceit, sexual trysts and an untimely death make up a sordid tale investigators say they uncovered among those who ran a government-funded shelter for "lost boys" of the polygamous FLDS Church.

A yearlong investigation by the FBI and the Salt Lake County Auditor's Office resulted in federal prosecutors going to a grand jury seeking criminal charges against Richard Parks, the county's AmeriCorps program administrator for the past eight years.

"It's an incredible story," said Jim Wightman, the county auditor's director of compliance and performance assessment. "It's off the charts. It involves so many aspects of Utah culture."

We concluded that obligation of due care was neglected in numerous instances at all levels of administration. This resulted in wrongful acts, some illegal and others negligently administered.

Auditors discovered a "remarkable lack" of county and state oversight of the program, according to a 78-page Salt Lake County Auditor's report obtained by the Deseret News. The report also found:

• AmeriCorps workers at the lost boys shelter were overpaid a total of $21,937. (Workers are volunteers who receive a stipend for completing contracted service hours.)

• The shelter's clinical director and others were paid for full-time work though they enrolled as half-time AmeriCorps workers.

• Parks allegedly obtained reimbursements for trips to St. George that were not business-related but to carry on an affair with an AmeriCorps worker.

Reached at his home, Parks said he did not want to comment on the allegations. Parks' attorney, Greg Skordas, said he tried to resolve the allegations prior to the indictment, but couldn't reach an agreement with federal prosecutors.

"We have a difference of opinion on his culpability," Skordas said.

From October 2006 to October 2008, Salt Lake County's AmeriCorps program had an agreement with the nonprofit New Frontiers for Families and its House Just Off Bluff project.

The eight-bedroom home near Bluff Street in St. George served as a haven for boys fleeing from or being kicked out of the FLDS communities of Hildale, Utah, and Colorado City, Ariz. AmeriCorps, a national service organization that relies on volunteers, provided workers for the shelter. 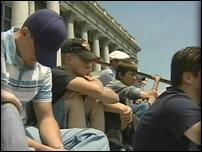 The national attention being given to the FLDS Church due to the raids has also brought another group into the spotlight: the Lost Boys.

In addition to the AmeriCorps grant, New Frontiers received $250,000 from the Utah Legislature for the shelter. Johnson, a one-time multimillionaire philanthropist whom federal authorities indicted and sued in connection with alleged Internet marketing fraud, donated use of the house.

St. George officials closed the shelter in October 2008 amid allegations that clinical director Michelle Benward was not properly licensed and that the house violated city zoning laws. Benward was fired at the same time.

Benward later acted as the "whistleblower" in the case, Wightman said. She brought the pay and timecard irregularities to Salt Lake County's attention in December 2010. Salt Lake County ran the program because Washington County, where the shelter was located, did not have an AmeriCorps grant.

Benward, too, received payments she was not entitled to under AmeriCorps policy, according to the audit.

"We chose not to target her," Wightman said. "But she was working it from every angle."

Benward also told county officials that her sister, Jami Christensen, lived and worked as an AmeriCorps volunteer at the shelter and had an affair with Parks, who was married. Parks knew Christensen from a youth program she participated in when she was a teenager. He received travel reimbursements for at least three trips to St. George from Salt Lake City to meet Christensen, the report says.

Christensen, who suffered from mental illness, died of a drug overdose in July 2010 at age 38.

"Emails obtained from her sister's email account after her passing led Benward to believe Parks' relationship with Christensen may have played a role in her untimely death," the report says.

Wightman said investigators asked Parks if he thought he contributed to Christensen's death. "Without hesitation he said yes," Wightman said.

The report said Parks' job depended solely on the AmeriCorps grant and he lacked judgment in recruiting volunteers with whom he'd had along history, and then had an affair with one of them.

"This created conflicts and pressure that fed his acts of deceit and fraud," according to the report.

Parks felt pressure from state lawmakers and the attorney general's office to expedite the lost boys program and ensure its success, the report suggests. The house was set up quickly and without a proven track record, Wightman said.

"The way I would characterize Rich is he saw that he had a program that was all up to him," he said. County administrators, Wightman said, trusted Parks due to his long history with AmeriCorps programs and paid little attention to the house because it was hundreds of miles from Salt Lake City.

"I think Rich figured that out and took his carte blanche and ran with it," Wightman said.

The report says state and county administrators were lax in their oversight of the program.

"We concluded that obligation of due care was neglected in numerous instances at all levels of administration. This resulted in wrongful acts, some illegal and others negligently administered," the report states.

The findings may jeopardize the county's ability to receive future AmeriCorps grants.