High school student to peers: Suicide is never the answer

CLEARFIELD -- The Clearfield High School community is grieving the loss of two of its students who took their own lives. One student has a message for young people: Suicide is never the answer.

In a state that's normally known for being "happy," Utah actually ranks 9th for suicide rates in the country.

"You should never feel like you should kill yourself. Ever," said Jeffrey Knighton. The 17-year-old is still reeling from the news of his friend who committed suicide Wednesday morning. The two boys played in a jazz band together.

"We laughed. We talked," Knighton said. "We destroyed a bag of gummy worms on the bus."

Another classmate committed suicide on Sunday.

"These kids played football, soccer, they had fun, went to parties, did so many things," Knighton said. "But it was that one emotion that they were feeling that night when it happened."

Knighton said that if kids only knew the ripple effect suicides have on their friends, family and community, they wouldn't do it. 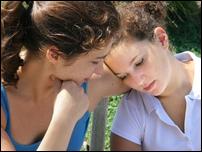 Young adults and mental illness: What you should know

When the signs of mental illness appear in teens, they can be seen as the kind of hormonal mood swings all adolescents experience. But when the signs point to mental illness, it's crucial to act. Here are some things to watch for and some advice.

"This is one bump on the way to where you're going," Knighton said. "You're going to go somewhere far beyond these minor emotions that feel big now but are so small in your lifetime."

University of Utah Child Psychiatrist Doug Gray said teen suicide is an increasing problem in Utah. He said sometimes the kids who attempt suicide are under distress like being bullied, or worse. But more often than not, suicide is psychological.

"If you look at the kids who actually die from suicide, these kids more often have serious mental illness like bipolar disorder and depression," Gray said.

In a 2009 Behavioral Risk Analysis Survey conducted by the Utah Department of Health, one in four students reported feeling sad or hopeless. Nearly 16 percent of respondents said they had considered suicide.

Researchers say living at a high altitude can affect those with mental illness to the point of suicide. But Gray said suicide doesn't have to happen, because doctors can treat depression and other things that may lead to suicide.

"We do have effective treatments," Gray said. "They (the suicide victims) didn't believe that. They were trying to hide their illness because of the stigma associated with having a mental illness and they were not in treatment."

Other health workers say it's incredibly important not to sweep suicide under the rug. You have to talk about it.

"It's really, really important to have dialogue and bring in folks into the schools to talk about suicide, talk about what the effects are, talk about the impacts," said Tammer Attallah with Utah Valley Mental Health.