NORTH OGDEN — Since police reported they found human remains in Morgan County when acting on a tip in the search for 16-year-old Alexis Rasmussen, many of those awaiting news on the girl have feared the worst.

Dozens of people have posted on the "Bring Alexis Home" page on the social networking website Facebook, expressing their fear the body is Alexis' and their hope that it isn't. More than anything, they pledged to pray.

North Ogden police issued a short statement Thursday saying they are still awaiting the results of the autopsy.

"At this time, we still cannot confirm the identity or any details concerning the body," North Ogden police detective Paul Rhoades said in the statement. "We do not anticipate any new developments (Thursday), and the case remains under investigation."

Meantime, public focus has turned to the couple the girl was baby-sitting for on Sept. 10 — the night she was last seen. The girl texted her mother around 11:30 p.m. and reported that Eric and Dea Millerberg weren't home yet. Her mother told her to make sure she got paid and to stay the night.

Alexis reportedly texted a boy around 12:30 a.m., but the boy told the girl's mother he didn't see her at all.

Alexis hasn't been seen since.

I had been very concerned about traffic and different things that have been gong on with our neighbors, the Millerbergs, but I didn't have the connection at the very first between Alexis and the Millerbergs until more recently.

Neither Eric nor Dea Millerberg has been named as suspects in the teenager's disappearance, but neighbors have expressed their own suspicions.

"I had been very concerned about traffic and different things that have been gong on with our neighbors, the Millerbergs, but I didn't have the connection at the very first between Alexis and the Millerbergs until more recently," Wendy Horne said. "Now, it's been: 'OK, I can definitely see some some connection there' and so can all of us. I think its pretty obvious."

Horne said the Millerberg family has long been a source of worry for her and her family and that the police have visited the Millerberg home "several" times. Horne said she and her neighbors had been witness to a number of domestic incidences, some of them violent.

"I have been deeply concerned about what's been going on over there," she said.

One man, who did not want to be identified, said that whatever was going on in the home, it "wasn't a healthy thing."

He also reported seeing a number of young people "coming and going" from the pair's home at 3228 N. 900 East, especially in the summer months. He was told there was drinking involved, but the man wasn't sure.

The unidentified neighbor said he's just happy to have them out of the neighborhood for the time being, while Horne said she is concerned about their possible connection to the girl's disappearance.

"Most of the people around here are really good people so this has really been upsetting to all of us," Horne said. "It's not something we would expect in a community like this."

Eric Millerberg has a long criminal history, with frequent arrests and charges in the 1990s for burglary, theft and drug related crimes.

He was first sentenced to the Utah State Prison in 1997 on a felony burglary conviction and failing to obey the command of a police officer as well as misdemeanor drug possession.

In 1999, after he paroled from prison, he was convicted on two new felony counts of firing a gun from a moving vehicle and sentenced to up to five years in prison. He was also charged in a separate case in 1999 with two counts of aggravated assault, aggravated burglary and witness tampering. But the case was later dropped after a witness failed to show up at court for testimony.

In 2003, Eric Millerberg and four others were charged with first-degree felony burglary and misdemeanor assault. But the case was dropped when a witness again failed to appear. 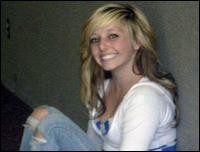 Police and prosecutors announced Wednesday that a tip from a confidential informant in the investigation of a missing teen has led them to human remains in rural Morgan County.

He was paroled from the Utah State Prison in 2004 but returned a short time later for violating his parole with a DUI conviction.

He completed his sentence in 2006 and had remained off paper until 2010.

In 2010, Eric Millerberg took a plea deal, pleading guilty to two felony counts of unlawful use of a credit card and forgery. He was given a suspended prison sentence and ordered to spend 180 days in jail.

Police have conducted searches on the Millerberg home since Rasmussen was reported missing. But police aren't saying whether the searches were conducted for the drug investigation or the missing person investigation.

At a news conference Wednesday, North Ogden police did use the word suspects during the news conference, saying they were looking at a couple of them. But they did not say whether the Millerbergs were considered "suspects."

Written by Emiley Morgan with contributions from Mike Anderson and Sandra Yi.