"He was the first of so many things for our franchise," said RSL Founder Dave Checketts following the match. "He was the first player we ever signed, he scored the first goal, he was the first in the history of the league to score 100 goals and after he had done all that, we asked Jason to abruptly to hang up his boots and to become our new head coach where he quickly demonstrated the will and drive to allow us as a group, as a family, to accomplish further firsts for RSL - our first playoff birth, our first MLS Cup title, and the first professional championship in Utah for 40 years."

With the fans cheering loudly, Checkets continued saying, "We also were the first MLS team to win a CONCACAF group. And I know we believe we're going to get back there and be the first to win the CONCACAF championship." 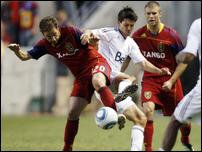 Fabian Espindola scored the tying goal in the 83rd minute to give Real Salt Lake a 3-3 draw with the New England Revolution on Monday night.

An emotional Kreis stepped to the podium and before giving thanks to fans, family and many others who have helped him along his journey with RSL, asked fans to stay standing and give a round of applause for the "unbelievable fight" they put up during that game.

Following his comments, Kreis' RSL number was retired and his name and number are now posted above the west side stands within their Fortress, Rio Tinto Stadium.

In their beginnings, RSL owner Dave Checketts chose Kreis as the first player for RSL on Nov. 17, 2004. Kreis retired from RSL and turned in his captain armband to step up as the second head coach of RSL on May 3, 2007 making him the youngest head coach in MLS history at just 34 years and 127 days old.

Kreis has led RSL to their first ever MLS Cup title in 2009 and then in 2010 led RSL to become the first-ever MLS team to win a CONCACAF group.

Kreis told the media following the presentation and firework celebration that stepping back out onto that field to accept the honor of his number being retired was a difficult thing, because of the draw and frustrating moments and calls within the game, but was just proud of his roster.

"It was a wild and crazy game, said Kreis." "My take away from the match is that I'm really, really, really proud of our guys. I just couldn't be prouder of the fight that they put in to suffer a penalty kick and a red card decision in the first five minutes of the match, to go down two goals and a man and to fight the way they were and to be dominating the game when they were down in that situation was remarkable to say the least."

Kreis was also happier with this result than what could have happened on their home field. "We did manage a draw, which is better than losing at home. I have so much pride in the guys, a lot of anger about some other stuff, but a lot of pride in the guys."

RSL will remain at home this weekend as they host FC Dallas on Saturday.