JOPLIN, Mo. — Three days after an F5 tornado swept parts of Joplin, Mo., to ruins, residents there remain in shock and disbelief. One group rode out Sunday's devastating tornado in a Latter-day Saint stake center. Amazingly, all eight walked out alive.

Janice Falls and Lee Allphin are two of those survivors.

We were very blessed. We were very fortunate. We felt hands protecting us -- all of us felt that.

"We were alive. Every single person in that room was alive, and that we were grateful for," Falls told KSL News Wednesday.

Falls was getting ready for a Relief Society meeting Sunday evening; Allphin was going to speak.

"It was cloudy. It was just a typical Missouri storm," Falls said. "The meeting started, and the first indication we had that it was going to be something different was that the sirens went off."

One of the men shouted at everyone to get into the bathroom. The sirens the group heard were followed by silence. Then the tornado hit.

"You could hear this cracking, and explosion after explosion; and there were so many sounds you can't even describe it" Falls said. "But it wasn't just the hearing it, you could feel it. Because it just went right through your body." 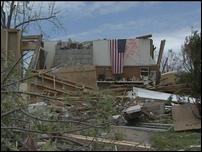 Three days after one of the deadliest tornadoes ever tore through the small town of Joplin, Missouri, residents who survived the direct hit are trying to put their lives back together.

They ran into the women's restroom; each piled on the other. A 7-year-old girl was at the bottom of the pile.

"We all just piled on, and Ruby was at the bottom, and we just rode it out," Falls said.

They felt the pressure. They heard the shredding of metal. Cinder blocks flew the air.

"A cinder block came and hit me in the head," Allphin said.

After four long minutes, the tornado moved on. Stunned, they realized they had survived.

"We were very blessed. We were very fortunate," Allphin said. "We felt hands protecting us — all of us felt that."

Now, both Falls and Allphin are reevaluating their mission, purpose and outlook on life.

"It's a big reminder to me of what's important in life," Falls said.

Falls said once she got home that night, she looked in the mirror to find herself covered with debris. But she counted herself lucky that she survived.