WEST VALLEY CITY - A former Special Forces soldier from Utah who was wounded in Afghanistan is talking about what the death of Osama bin Laden means to him and the future of the U.S. military in the Middle East.

"I was personally happy to see that," Layne Morris told KSL Monday. "Any time evil is defeated, that's a great thing and it's something to be happy about."

"Do I take a lot of satisfaction, a lot of semi-quiet satisfaction, in knowing that bin Laden is dead? I do. I guess a small part of that is personal. But for me, it's for my country," he said.

It also made Morris reflect on what he considers another "great day." 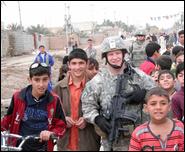 A Utah soldier who carried Saddam Hussein's boots out of the infamous spider hole where the former Iraqi president was captured says news of Osama Bin Laden's death has "re-motivated" American troops.

It was in 2002, the day he lost sight in one eye. He was part of the Army's 19th Special Forces hunting for al-Qaida. In the middle of a firefight, he reached up to fire a rocket launcher and was hit by shrapnel from a grenade.

"I just figured my brains were oozing out the back of my head and I was standing there dead," Morris recounted. "I thought, ‘OK, this is what it now feels like to die.' Of course, a half-second later you realize, ‘I have no idea what happened, other than I can't see out of my right eye.'"

His optic nerve was severed, and he would never see out of that eye again. But Morris considers it a great day, because he went from believing in an instant he was dead to surviving.

Morris and the family of medic Christopher Speer were awarded $102.6 million in 2006 in a civil suit targeting al-Qaida's funds around the world. Speer was killed in the same attack that left Morris blind in one eye. Proceedings are still continuing at Guantanamo Bay for the detainees held responsible for the attack. Morris says he doesn't ever expect to get any of the money.

Now that bin Laden is gone, Morris feels the threat of retribution is real. However, he suggests now is the time to pull back from Afghanistan.

"We've now taken out bin Laden. Al-Qaida left Afghanistan a long time ago. The conflict's now with the Taliban. So, I think we need to re-look at the Taliban. Are they a threat?" he asked. "Do we have the blood and treasure to spend around this world, propping up ineffective and wishy-washy governments simply because there's the potential they could be a home to al-Qaida?

Morris says Afghanistan is no more stable than it was 10 years ago.

"Is it worth the folks we're losing over there?" Morris further questioned. "At this point, I'm not sure that it is."