SALT LAKE CITY -- Kandas Prasad's "ah-ha" moment came when she saw her 4-year-old handle a Crayon as if it were a cigarette.

"I thought to myself, 'OK, this has got to stop,'" Prasad said of a smoking habit that began when she was 15 years old.

Tobacco was but one of Prasad's addictions. She is also a recovering heroin addict. Remarkably, the 27-year-old managed to give up both substances while undergoing treatment at the House of Hope in Salt Lake City.

Under a wellness initiative announced Wednesday at the treatment center by representatives of the Utah Department of Health and the Utah Department of Human Services, all publicly funded substance abuse and mental health facilities in the state will be tobacco free by 2012. The underlying goal the Recovery Plus initiative is to develop holistic treatment plans for all clients in substance abuse and mental health facilities that receive public funding.

The program will integrate tobacco cessation into treatment protocols and require the campuses to be tobacco free. 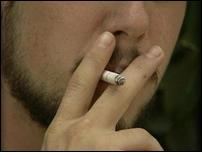 Utah County took a step to keep smokers from ever lighting up on county-owned property.

"Many people have such severe problems that at times we forget that tobacco use kills more people than the so-called 'serious' drugs combined," Rolfs said.

On average, people with mental illness die 25 years earlier than the general population, largely due to conditions caused or worsened by smoking. "In fact, in Utah, we know it's 29 years earlier," said Palmer DePaulis, executive director of the Utah Department of Human Services.

Prasad said she also wanted to quit smoking because she has been a witness to her mother's declining health. Her 66-year-old mother has smoked for 51 years. She has emphysema and lives in a nursing home, where she is on oxygen 24 hours a day. "I see every day how smoking kills. It kills slowly and painfully," Prasad said. Prasad has not smoked for seven months. "It's very important to me to be able to say 'I'm a nonsmoker' -- to show my kids what I've overcome. They're excited, they're very proud of me."

The initiative will ramp up over the next two years. The state agencies have spent much of the past year planning how to launch the initiative. Meanwhile local health, substance abuse and mental health agencies have been meeting to share their expertise and develop policies and practices to make the program work.

Many people have such severe problems that at times we forget that tobacco use kills more people than the so-called 'serious' drugs combined.

Prasad said slowly implementing the program makes sense considering "there are some women I've been in recovery with that would probably leave treatment without cigarettes. That's what's scary about this."

But Prasad knows from her own experience that giving up tobacco on top of heroin was a remarkable gift for her children. They will have a mother who has substantially better health and someone who does not model smoking to her children.

"It worked for me. I'm just hoping I can help somebody else," she said.