UHP plea to slow down

SALT LAKE CITY -- Icy roads have proven hazardous for highway patrol troopers responding to motorists. At least two troopers' cars have been involved in accidents during this week's storm.

A trooper's car was hit Wednesday night along Interstate 15 just north of Fillmore. 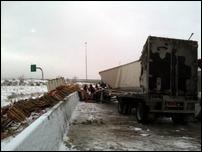 Snowy roads made for a rough commute along much of the Wasatch Front Thursday. The storm crippled Utah's roadways and caused several slide-offs and crashes.

Authorities say the trooper got a call from dispatch to respond to several slide offs in the area around 6:50 p.m. He pulled into the median, turned around and began driving northbound when an SUV hit the trooper's car.

The SUV's left front corner struck the right rear of the trooper's vehicle, causing the trooper to spin out and end up facing west in the northbound lanes.

Neither driver was seriously injured although the trooper was taken to a hospital to be checked out.

The driver of the SUV was cited for driving too fast for the conditions.

And a UHP patrol car was hit Thursday as is was stopped on the shoulder of I-15 at the Box Elder/Weber county line. The trooper was outside of his vehicle handling a previous crash in the left-hand emergency lane.

A southbound vehicle lost control on the icy road and hit the passenger side mirror of the patrol car.

No injuries were reported.

Weather was a factor in a three-vehicle crash Thursday involving a Utah driver and an Idaho State Police deputy.

Deputy Bradley Eddins was sitting in his parked patrol truck with traffic cones out and lights on, providing traffic control for a semi that had slid off of I-15 north of Dubois, Idaho. He was waiting for a tow truck when a car lost control and hit the rear of Eddins' patrol vehicle.

Another car, this one driven by a 39-year-old man from Payson, Utah, hit the car that had crashed into the deputy's vehicle.

Two people from the first car are hospitalized in stable condition. Deputy Eddins and the driver from Utah were uninjured.