SALT LAKE COUNTY -- A car heading the wrong way on westbound Interstate 215 crashed into a semi just after Knudsen's Corner, killing the driver. It happened around 9:45 Wednesday morning.

The Utah Department of Transportation has reopened all but one of the southbound/westbound lanes of I-215 near 6200 South. There were partial lane closures on the eastbound/northbound side of I-215 for several hours, but those closures have also been lifted.

Witnesses say driver may have been confused

The Utah Highway Patrol says the elderly driver of a red Camry, believed to be in his 80s, got on westbound I-215 at 1300 East, then somehow got turned around. Three minutes after the first calls reporting the wrong-way driver came into dispatch, his car collided with a semi truck coming around the corner.

Witness Todd Smith was traveling in the eastbound lanes and says, at one point, he was traveling parallel to the Camry on opposite sides of the median.

"When I'd look over at him, he would just -- he had both hands on the wheel. He was just driving. He looked calm to me. He didn't look like he was nervous or he was trying to get out of traffic," Smith said.

Unified Fire Authority Capt. Clint Smith said when the man's car collided with the semi truck, the truck rolled, and then both vehicles burst into flames.

"With the spill of the fuel on the road, it also started a fire that started to move into the brush and up the hill toward the homes. So we had multiple scenarios playing out at the same time," Smith said.

Matt Arnold sent video of the crash to KSL. He said he heard two explosions. 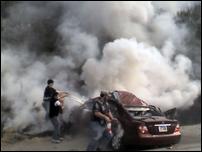 The driver of a semi truck involved in a fiery crash Wednesday morning survived with serious injuries. Authorities credit a few brave people for pulling him out of the wreckage.

"It looked like the whole freeway was on fire, you know, just flames everywhere," Arnold said.

"It was amazing, craziest thing I have ever seen," Arnold said.

The driver of the semi truck sustained serious injuries in the accident, including a punctured lung and a cut to his head. He was transported to a local hospital.

Emergency responders believe the elderly driver of the passenger car was killed instantly.

Fire from crash threatens nearby homes

High school students working in the area heard the crash and ran to see what happened.

"First I saw the black smoke, and then we came over later and that whole side [of the hill] was just engulfed in fire," witness McKay Nielsen said. "We heard this big boom, and then a tree just lit up."

The fire threatened homes in the Eagles Landing Cove neighborhood. McCade Miller was reading a book inside his home when he heard the crash. He was talking to firefighters about it when flames started coming toward his house. He got out a garden hose to try to douse the blaze.

"I was pretty close to them," he said. "I mean, it's not smart, but you gotta keep it from getting worse; and I didn't want my vehicle or anything else being damaged."

Miller also got some help.

"Several of the neighbors ran over and just were pulling hoses from the other parts of the house," he said.

Luckily, crews were able to put the fire out before any homes were damaged. Miller says a neighbor's car was damaged, but the fire didn't make it much past his property line.

UHP is continuing its investigating to determine exactly what happened to cause the crash.