Some question whether Hatch is ‘pandering to extreme right'

WASHINGTON, D.C. -- Sen. Orrin Hatch voted to confirm Elena Kagan's nomination to not to the Supreme Court, but to another post. Why the change of heart for Hatch?

Is it because it's a different job she's after, or because the political climate has changed?

Hatch on Friday said he will not support Kagan's nomination to the United States Supreme Court. His announcement is being interpreted, by some, as yet another step to the right.

That and other statements from the senator are being closely watched after fellow Sen. Bob Bennett was voted out at the recent Republican state convention.

Hatch's people say he's the same Orrin Hatch people have known for years -- but there are those who feel Hatch has changed and is running for re-election two years early.

Opposing the Kagan nomination is one of many actions that some say shows a different, more right-leaning Sen. Hatch.

"This transition has really happened since the caucus meetings, and I think he's very much pandering to the extreme right of the Republican party," said Wayne Holland with the Utah Democratic Party.

Hatch is being carefully watched after Republican delegates eliminated his colleague Bennett for not being conservative enough, among other things.

Hatch is up for re-election in two years. Many suspect sharper rhetoric, more open opposition and criticism of Democrats are signs he's preparing for his own convention battle.

For example, Hatch had never voted down a judicial nominee before he rejected Sonia Sotomayor. Elsewhere, his well-known bi-partisan approach appears to have fizzled. 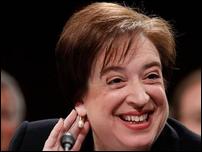 A portrait of Kagan emerges

This week's Senate confirmation hearings were America's first and probably last chance for an in-depth conversation with Elena Kagan.

But Hatch spokesperson Antonia Ferrier says the Senator is not "pandering to the right." Ferrier says Hatch is consistent and has legitimate concerns about both Sotomayor and Kagan.

Still, political reality has to be part of Hatch's thinking when he speaks out on any issue.

"I think there's no question Senator Hatch is going to emphasize the further right issues right now," says Kirk Jowers with the Hinckley Institute of Politics. "I think the convention was a huge wake-up call for him."

On Kagan's nomination, Hatch says he can't support her past support of activist judicial philosophy.

"I was surprised when she encouraged us at the hearing simply to discard or ignore certain parts of her record," Hatch said.

But he can't resist a political punch when talking about it.

"Republicans aren't going to filibuster. The only people who have filibustered a judicial nomination was Democrats," Hatch said. "And by the way, the president of the United States, Barack Obama, was one of them."

The truth is, a political dynamic is always going to exist. And for Sen. Hatch, it's going to involve walking a tightrope for the next two years.