But it was their bench that bailed them out Tuesday night, when Utah rallied from 11 points down in the third quarter and four at the start of the fourth to beat the Los Angeles Clippers 109-99 at the sparsely filled Staples Center and extend its winning streak to nine.

"I'll tell you one thing: Ronnie Price got us that lead all by himself, man, and we took off from the there," said Carlos Boozer, who led the Jazz with a 34-point, 14-rebound double-double one night after learning Clippers center Chris Kaman and not he had been named an NBA All-Star sub in place of injured Portland guard Brandon Roy.

"We stuck together as a group of guys, believed in what we were doing," Boozer added, "and we came back and won a big game."

It was the 13th win in their last 14 outings for the 32-18 Jazz, who with a win tonight at home against the Los Angeles Lakers — their final game before this weekend's All-Star Game break — can notch the 10th double-digit win streak in franchise history. 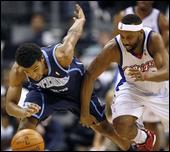 Price brings Jazz back in time of need

Things looked a little uncertain for the Jazz throughout the first half of their matchup with the Clippers Tuesday night, but as Ronnie Price filled in for Deron Williams late in the third and early in the fourth quarters, the Jazz were able to close the gap on Los Angeles' once-11-point lead and get their ninth-straight win as they claimed a 109-99 victory on the road.

"Everybody knows how corny that is, but that's the only way I know to try to help them out," he added. "Just go play, and put everything you have into it, and then worry about having a good time after that."

Boozer's good time, he admitted afterward, was motivated by having "an extra chip on my shoulder."

And it was, though it all would have gone for naught if not for a few breaks — and the bench.

"Ronnie Price and C.J. (Miles), they did a terrific job. Wes Matthews. They did a good job defensively," Sloan said.

That also sparked a 10-1 Jazz run with backup Price running the point, a stretch which also included rookie Matthews' fastbreak layup, Boozer's layup off a feed from Miles, and Miles' pass to Matthews for a layup and the free throw that followed.

"He made some great passes," Sloan said of Miles.

"He made some great plays," Boozer added. "He was a playmaker out there coming off that pick-and-roll."

With that, the Jazz essentially were assured of beating the Clippers for a sixth straight time.

"You have to have a little bit of luck," Sloan said.

The Jazz led by as many as seven in the opening quarter and by eight early in the second quarter, but the Clippers took the second 30-23 went into halftime ahead by four at 56-52.

Boozer had 14 points and shot 6-for-7 from the field in that opening half, but no one with the Jazz had more than Mehmet Okur's seven before the break.

The Clippers extended that advantage to as many as 11 on a layup by newly named All-Star Kaman with just more than two minutes to go in the third quarter, and they went into the fourth up 84-80.

NOTES: Williams, plagued by foul trouble and turnover troubles, had a 13-point, 11-assist double-double as the Jazz dished 32 assists in all. . . . Reserve swingman Kyle Korver, who didn't play in two of Utah's previous three games, made his first and only appearance of the night midway through Tuesday's second quarter. He hit his only shot in the first half, a 20-foot jumper. But Korver still is without his former backup shooting guard job, manned instead now by Matthews. . . . When the Clippers replaced still-general manager Mike Dunleavy with assistant Kim Hughes on an interim basis last week, it marked the 236th coaching change since Sloan was named head coach of the Jazz on Dec. 9, 1988. It was the 12th for the Clippers in that span, tying them with Denver and New York for the most.