SALT LAKE CITY -- Winston Churchill once said, "Never yield to the apparently overwhelming might of the enemy."

Deron Williams took that message to heart. Williams rallied the Utah Jazz back from an 18-point deficit to knock off Dwight Howard and the Orlando Magic Thursday night.

After a miserable first quarter that saw the Jazz fall behind by 13, Deron put the load of the team on his back. Deron finished a season high 32 points, 15 assists and was only two boards away from having a triple-double (8).

"We all were disappointed with our loss yesterday in LA," said Williams. "We just had to get out of that funk. I started shooting and started getting a little more aggressive, going to the basket and opened some things up." 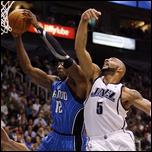 Deron Williams scored 21 of his 32 points in the second half and had 15 assists and eight rebounds, leading the Utah Jazz to a 120-111 victory over Orlando on Thursday night that snapped Magic's six-game winning streak.

It was the largest deficit that the Jazz have overcome to win this season, beating the last comeback of 15 points against San Antonio Dec. 7.

"Going down 18 points against this team is a pretty big hill to climb," Utah Jazz Head Coach Jerry Sloan said. "We didn't get off to a very good start, but I thought our guys fought back and got back in the ball game. Deron was terrific."

After the loss, Orlando was quick to praise Deron's determination and ability. "He killed us. He is just a great player," Magic Head Coach Stan Van Gundy said.

"He's the leader," Magic guard Vince Carter told reporters after the game. "He does a great job of facilitating, and you have to respect his ability to get to the basket and his ability to shoot the ball. He played tremendous tonight."

Deron never gave up, putting on a masterful performance that caused Jazz fans to chant once again, "MVP! MVP!"