After posting a 2-1 nonconference record to start the season, the Cougars will open Mountain West Conference play against Colorado State on Saturday. BYU has a 12-game home win streak in league contests, eclipsing the old mark of six held by Utah and Colorado State. The Cougars last suffered a MWC loss on Nov. 19, 2005 in a 41-34 overtime thriller to Utah.

The Cougars are coming off a 54-28 loss to Florida State in their home opener last week, while the Rams come to Provo after defeating Nevada, 35-20. Saturday also marks CSU's conference opener. 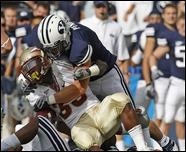 Cougars hope to learn from mistakes against Seminoles

ON THE TUBE Saturday's game will be broadcast live to a national television audience on The Mtn. James Bates will provide play-by-play coverage, with Todd Christensen lending analysis. Sammy Linebaugh will report from the sidelines. Bates was an All-Southeastern Conference linebacker at the University of Florida and captain of the Gators' 1996 national championship football team. Christensen was a standout at BYU before launching an NFL career, playing as a tight end with the Cowboys and the Raiders. Linebaugh is a former news reporter for KSL-TV in Salt Lake City and has worked as a freelance reporter before joining The Mtn. as a reporter. The game will mark the first of seven BYU games available on The Mtn. during the 2009 season.

WHAT THE GAME MEANS

Just as he had the week before against UNLV, Hall led BYU on a come-from-behind drive for the winning score. The drive covered 76 yards in six plays and took just 1:14 on the clock. It was capped by a 17-yard strike to Pitta with just 22 seconds on the clock.

Smith picked off a Colin Kaepernick pass with 3 minutes, 24 seconds left in the third quarter to put an end to a Wolf Pack drive that could've made it a one-score game. Instead, the Rams regained possession and maintained a 21-6 lead.

Stucker finished the game 10-of-20 for 165 yards and two touchdowns to go along with a 35-yard touchdown run with 6:43 left in the game, making the score 35-6. Morton caught his first touchdown of the year, to go with his touchdown pass, on a 49-yarder from Stucker in the third quarter. Mosure ended the day with 18 carries for 99 yards in his first action since being injured in the first half against CU.

Cougar wideout McKay Jacobson had a career day in front of the 13th-straight Edwards Stadium sellout crowd, using a career-long 80-yard touchdown catch to finish with 111 yards, the young sophomore's single-game best. His score came on the first play of a new BYU possession late in the third quarter, resulting in a scoring drive of 12 seconds.

Senior quarterback Max Hall finished the night 20-for-31 for 306 yards and two touchdowns, but was hindered by three interceptions.

In his first substantial action back from a hamstring injury, junior Harvey Unga led the Cougar ground attack, rushing for 97 yards on 10 carries for 9.7 yards per carry, including his first touchdown of the season minutes into the second quarter.

The Cougars' No. 7 national ranking in the AP Top 25 Rankings after back-to-back wins over Oklahoma and Tulane was their highest since finishing the 1996 season at No. 5. BYU entered the top 10 in the coaches' poll following Week 2 after earning a ranking as high as No. 7 last season.

COIN TOSS BYU won the coin toss before the start of the Florida State game and elected to defer—for the third consecutive week. BYU is now 2-1 when winning the toss.

PULLING OUT THE CLOSE ONES After a close 14-13 victory over the Sooners in their season opener, the Cougars have won nine consecutive games decided by seven points or fewer. Last season BYU pulled out nail-biters against Washington, UNLV and Colorado State.

DON'T LOOK BACK In the Bronco Mendenhall era, BYU is 34-4 when leading at halftime and 32-1 when taking a lead into the fourth quarter.

BEST IN THE MOUNTAIN WEST Since the Mountain West Conference was formed in 1999, BYU has posted a record of 52-22 against league opponents, marking the most wins of any other conference opponent. The Cougars have also won a league-best four MWC titles (1999, 2001, 2006 and 2007).

DOUBLE THREAT Junior running back Harvey Unga needs only 32 more receiving yards to become one of only nine Cougars to record over 1,000 career yards through the air and on the ground. Unga currently has 969 yards receiving and 2,385 yards rushing.

CONSECUTIVE CATCHES All-American tight end Dennis Pitta caught his first pass of the Florida State game with just over seven minutes remaining in the second quarter for an 11-yard gain. The senior has caught a pass in 33 consecutive games dating back to Oct. 23, 2004 (at Air Force), prior to his mission.