According to linebacker, Mike Wright, "We're anxious to get this season going. It's been a long process preparing for this game, preparing for the season. We're excited to go out there and prove that we can hopefully make a good run and see what we can do again this year."

This year, the Utes start the season against Utah State at Rice Eccles Stadium Thursday night at 7. It's the 109th meeting between the two schools, making it the 12th oldest rivalry in the nation. Utah leads the series 76-28-4, but has won the last 11 straight against the Aggies. 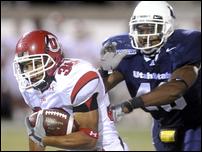 But Utah defensive star, Stevenson Sylvester said, "Oh yeah, it's a rivalry. Anything can happen on any given Saturday, or any game day, so we've got to take it serious.

"I mean they're zero and zero just like us," Sylvester added. "And we have no advantage over them right now."

One of the big story lines is Coach Whittingham going up against new Aggie head coach Gary Andersen. Andersen was Whittingham's defensive coordinator the last four seasons. Whittingham says the two are very close friends and talk frequently, but lately, "we've backed way off. We've been best of friends for years and share information, but it's a little bit awkward this year, and as the game has neared. In fact we haven't talked for probably two weeks now and that's just out of professional respect for each other." Whittingham added, "I'm sure we'll resume that after the game."

As far as the game itself, Whittingham said he's impressed with the Aggies starting quarterback, Diondre Borel.

"He's a guy that can hurt you a couple of different ways," Whittingham noted. "And to have an effective spread attack, you need that type of guy back there, a guy who's a run threat as well as a passing threat."

Utah's quarterback has still not been announced, though the Ute players know who will start on Thursday. Whittingham said, "People keep harping on it, to me it's not that big a deal. It's just a way to get the focus off a guy and let him just prepare."

"A new guy's going to be back there that hasn't played Division I football, but they're both very talented guys," offensive lineman Zane Beadles added. "We're comfortable with either one of them."

Whittingham acknowledged that the Aggies "certainly know more about our program than we know about theirs from a personnel standpoint. [Andersen] knows our personnel inside and out." Whether or not that ends up being much of an advantage remains to be seen. Utah's defense plans on a few "wrinkles" Thursday night.

The Utes are relatively healthy. Whittingham said there are just a few question marks, mostly on the offensive line. Koa Misi, he said, will be a game-time decision.