But Whittingham, starting his 5th season at Utah, made it clear that their BCS busting season is behind them.

"All we're concerned about is being the best we can be this year," Whittingham said. "Trying to defend the Mountain West Conference championship, we don't concern ourselves about last year."

He added, "Everyone's excited to be out here and I'm particularly excited we're back into it." 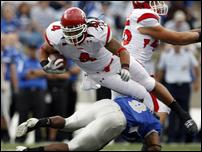 The Utah football team opened its annual preseason camp on Thursday. Between the start and finish of camp on Aug. 22, the Utes will conduct 20 practices, including three scrimmages.

What the coach is concerned about is his quarterback situation. The Utes lost Brian Johnson, the winningest quarterback in school history. The three candidates to replace him are true freshman Jordan Wynn, J.C. transfer Terrance Cain and Corbin Louks, who was Johnson's backup the last two seasons.

According to Whittingham, "All three are working hard and it's going to be interesting to see how this thing unfolds."

Though Whittingham calls the race "neck and neck" between the three, Louks says he thinks he's the top candidate.

"I definitely feel like I'm the number-one guy," Louks said at the first day of camp. "I've just got to stay consistent and I can take the job."

Cain said he'll leave the decision up to the coaches, though he felt good about his first fall camp with the Utes. "It went pretty good. Everybody trying to compete for their starting job and I'm guessing everybody's doing what they got to do."

For Wynn, the true freshman out of California, he feels all three have an equal chance.

"I think it's close if not wide open," Wynn said. "You know the coaches told me I'm going to have every chance. We're all going to get an equal shot, so I'm going to do my best."

Wynn added, "You know not too many true freshmen are given this chance and I'm not going to take it for granted."

Whittingham hopes to whittle the field to two by sometime next week, then name a starter the week before the season opener against Utah State on September 3rd.