Editor's note: This article is published through the Great Salt Lake Collaborative, a solutions journalism initiative that partners news, education and media organizations to help inform people about the plight of the Great Salt Lake — and what can be done to make a difference before it is too late. Read all of our stories at greatsaltlakenews.org.

SALT LAKE CITY — The Great Salt Lake's forgotten shoreline history is something state leaders want to place back into the public eye.

That's why we're taking you to a once-storied spot that, for decades, invited only delinquency and decay. If "Industry" is Utah's state motto, perhaps the place that best embodies that sentiment is near Lakepoint. After all, you've got the mine, the interstate and the railroad.

But this "RxR" representing the work ethic of stone and steel casts some actual shade on the R & R that began on a path just feet away. It's the rest and relaxation of Black Rock Beach.

"It's a very narrow shot where you can avoid the lake," said Utah Historic Preservation Officer Chris Merritt. "We know for 13,000 years, humans have been passing by this location and seeing it from the shoreline in high water years or being able to walk down in low water years."

Those pre-historic peoples who traveled the Great Basin may have seen the Black Rock itself crash down from the nearby Oquirrh Mountains, leaving that massive lump of limestone near the water's edge. But when our more recent ancestors rolled into the territory in July of 1847, there was no question. They were a lot like us. They'd rather be at the beach than building a settlement.

Thus started a love affair with this stretch of shoreline for decades.

"We have a deep recreational history at Black Rock that's largely just been erased after the abandonment in the 1960s."

Have you been out to Black Rock? This was the first spot anyone during the pioneer area used for "swimming" in the Great Salt Lake - Watch my story about the history and a new designation on the California National Trail on @KSL5TV News at 10! #KSLTVpic.twitter.com/ZVAftQLvCQ

So before the mid-20th century brought on the black eye of a public space that most would tag Black Rock, what was it like?

Once described as "grim and ugly," even by a 19th-century observer, this natural feature was both a figurative and literal island depending on the lake water levels and the recreational preferences of those who called Utah home.

"There was a little walkway pier out there."

Countless locals and visiting dignitaries alike flocked here, first taking the four-hour wagon ride from Salt Lake, then by rail, before the automobile era brought car lovers cruising to the west in just under 30 minutes.

Heber C. Kimball even built a home that stood here until Interstate 80 steamrolled certain remnants of the past, but the prominent Latter-Day Saint apostle and pioneer put his stamp on the history here, too.

Really aside from the massive Black Rock itself, you can barely tell there was any resort here along this section of the Great Salt Lake. And much like the Great Saltair and other picturesque spots, they had their season and they died out. The idea now, today, is to bring people back here.

"As an archeologist, I like to touch things. It makes it more real to me. It makes me more connected than reading it in a book."

Thanks to Chris Merritt, other historians and a whole lot of volunteers, this notable natural feature is not only restored to its former glory; Black Rock is getting its time to shine as a featured spot on the California National Trail and protection on the National Registrar of Historic Places.

"In the last really four years, we've had to try to turn it back to what it used to be — its natural beauty and its connection with history," Merritt said.

The massive clean-up effort that's sure to be ongoing will serve as a postcard of sorts, calling all history lovers and lake enthusiasts once again, walking instead of floating this time, but most importantly feeling.

"They're going to learn about history, but they're going to get a connection and maybe a passion to help us all protect the lake for the next generation," Merritt said. "For 100 years, four generations of people could come out to Black Rock Beach and go swim and recreate, go boating and yachting, and it was really a great place for all Utahns to come enjoy."

Merritt hopes the new and improved Black Rock can help Utahns relate to those who spent so much time here resting and relaxing — as we all work toward a renewed Great Salt Lake. 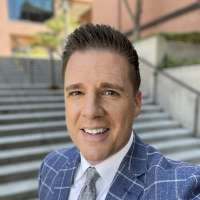