Randy Porter, chief of the Granite School District Police Department, poses for a photo at Rosecrest Elementary in Salt Lake City on Thursday. In the wake of last month's mass shooting at Robb Elementary School in Uvalde, Texas, Utah Gov. Spencer Cox said that it's more than likely "it will happen in the state of Utah one day." So, just how prepared is the Granite School District Police Department in responding to the unthinkable? (Spenser Heaps, Deseret News)

SALT LAKE CITY — In the wake of last month's mass shooting at Robb Elementary School in Uvalde, Texas, which resulted in 19 children and two adults being killed, Utah Gov. Spencer Cox said that it's more than likely "it will happen in the state of Utah one day."

The Uvalde school district's police chief was put on leave last week following allegations that he made "terrible decisions" during the mass shooting and that the police response was an "abject failure." Chief Pete Arredondo told the Texas Tribune he didn't consider himself the commander in charge of operations and assumed someone else had taken control of the law enforcement response.

Why a special police force?

First, it's important to understand why Granite School District has its own police force.

Granite School District Police Chief Randall Porter said that there are "unique challenges" that come up in the district.

With over 60,000 students, Granite is the third-largest school district in the Beehive State and among the largest public school districts in the nation. It's also expansive, with the district boundary encompassing 257 square miles and multiple police jurisdictions.

District spokesman Ben Horsley said, between students and staff, there are over 80,000 people in district buildings at any given time, which would make the district one of the largest cities in the state if standing alone.

"If you look at the highest crime cities in the state, five of them reside in Granite School District — and crime doesn't stop at the schoolhouse doors," Horsley said.

The district's police department is made up of 25 full-time officers as well as a 24/7, 365-days-a-year dispatch center at the station that is staffed by five full-time dispatchers who have access to every camera — over 7,000 — in every Granite School District building.

"We need to have the flexibility and the support to provide security to our schools when our local allied agencies may not have the ability to do that right away," Horsley said.

Porter said the goal of the department isn't to arrest students, and there's a difference in approach and style when policing students.

We're not looking for officers that want to kick down doors or be on a SWAT team. There's a time and place for an officer to be aggressive, but we're looking for people who want to talk and engage and work problems out.

"We deal with a population of students; they're different than dealing with adults. The teen brain develops differently that you have to approach things differently," Brown said. "Our officers are trained heavily in de-escalation and what I call are trained in 'not getting stuck in a contemptive cop rut.'"

What he means by that, he said, is that district police face scrutiny and heckling from students on a regular basis and it's important for the district's officers not to overreact.

"We're not looking for officers that want to kick down doors or be on a SWAT team," Porter said. "There's a time and place for an officer to be aggressive, but we're looking for people who want to talk and engage and work problems out."

Additionally, not all of the allied law enforcement agencies that the Granite School District Police Department works with have school resource officers, something both Horsley and Porter pointed to as a benefit of having a districtwide police force.

Without its own police department, Horsley said there would be at least 11 secondary schools in the district — including the biggest high school in the state, Granger High School — without any in-house police coverage at all.

Responding to a shooting

Along with handling day-to-day disturbances and maintaining the security of district properties, Porter said the Granite School District Police Department is prepared for every type of threat that could be imposed upon schools.

To supplement the training, heavy-duty breaching tools are deployed throughout the force to allow officers entry into a building in the event of a barricade scenario, and all of the officers carry school keys.

If officers from an allied agency were first to arrive on the scene of an active shooter scenario or another situation that required immediate entry, there are secure key boxes on all Granite School District buildings with an access code that the various agencies have.

"You don't want to have to be relying on someone else to come let you in a door, so you have the tools necessary to open it and breach that door, or you have the keys available," Horsley said.

Porter, who has been an officer with the department for 18 years and chief for the last five, said responding to school threats is a "constant evolution."

"I came on board not too long after Columbine, and we have updated our practices; and the way we train officers has been a constant evolution as the times change," Porter said. "It's not like we do this just once a year and then we'll look at it again in a year. This is constant throughout the year."

Horsely said the public can expect to see Granite School District at the forefront of a "number of security measures."

"We talk a lot about those publicly, we talk about many of those very little because we don't want to diminish their effectiveness within our security plans," Horsley said, adding that the discussion around school security happens on a regular basis with district leadership and the State School Board, along with the district's police department.

The Uvalde school district's police chief has been put on leave following allegations that he erred in his response to a mass shooting that left 19 students and two teachers dead.

It's great to have security measures in place, but even when law enforcement agencies do arrive quickly, the worst can still transpire.

Col. Steven McCraw, director of the Texas Department of Public Safety, testified last week that three minutes after 18-year-old Salvador Ramos entered Robb Elementary School, sufficient armed law enforcement was on scene to stop the gunman. Yet those officers armed with rifles waited in a school hallway for more than an hour while the gunman carried out the massacre.

Porter said that a scenario like that wouldn't be the case with Granite police responding to the scene.

"Our officers are trained to attack the threat. We don't form up and hold a perimeter like they did in Columbine," Porter said. "The goal is to eliminate (the) threat at all costs."

"We want anybody to know (that) if they're going to come into a Granite School District building and cause harm in any way — minimal harm, maximum harm — they're going to be approached and accosted by a police officer within minutes," Horsley said.

He added that the district has seen and witnessed potential threats of attacks and weapons on school campuses that carried the potential to cause mass casualty events. Many were thwarted by the very type of training and police response that Porter has spoken about, Horsley said. 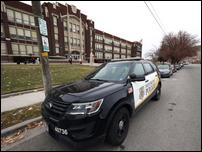 Threats at Utah schools this week are a reminder to 'see something, say something'

After threats to two Utah school districts this past week, officials including Gov. Spencer Cox urge parents and students to report information that is concerning or out of the ordinary.

In Uvalde, multiple law enforcement agencies were on the scene, raising questions as to what agency should have taken charge of the response.

Porter said this type of confusion is one reason why the district police department regularly trains with their neighboring police agencies and that most, if not all of the police chiefs in Granite's jurisdiction are trained in FEMA incident management and creating a command post at the scene.

The Uvalde school district chief also said he didn't have his police and campus radios during the Texas school shooting but that he used his cellphone to call for tactical gear, a sniper and the classroom keys, according to the Associated Press.

"I think it's important to note, as far as equipment-wise, all of our officers, including myself, have radios (where) we can communicate with each agency," Porter said of the Granite police force. "It's a matter of touching a button and we're talking to that agency's dispatch, or vice versa. ... If the suspect is still shooting people, officers go in until that threat is eliminated."

In lieu of the recent shootings, including the massacre at Robb Elementary School, Porter said there are lessons to be learned.

"We can learn things of shootings that have happened over the past two decades," Porter said. "Quick response, we know that; engage and eliminate the threat, and collaborate and be prepared."

"We as a society, in general, need to make decisions on guns and who has access to them," the chief added.