Sen. Mitt Romney, R-Utah, speaking at a committee meeting on Tuesday on Capitol Hill in Washington. Later in the day, Romney criticized a speech by President Joe Biden about doing away with the Senate filibuster rule. (Greg Nash, Associated Press) 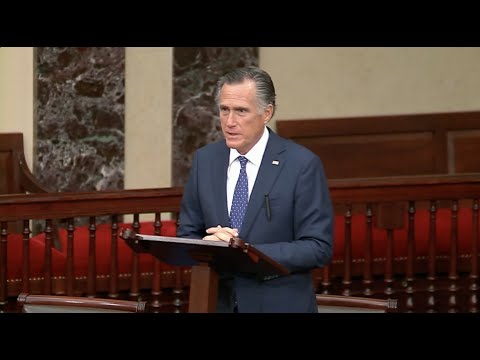 Romney: Democrats Conveniently Ignore Their Own Impassioned Defense of the Filibuster

SALT LAKE CITY — Utah's two Republican senators condemned Democrats' effort to eliminate the Senate filibuster as President Joe Biden said Tuesday there is "no option" but to eliminate the rule to pave the way for sweeping voting rights legislation.

"Let the majority prevail," the president said in a forceful speech at Clark Atlanta University in Georgia. "And if that bare minimum is blocked, we have no option but to change the Senate rules, including getting rid of the filibuster for this."

The 100-member Senate is evenly split between Democrats and Republicans. The filibuster rule requires 60 votes to pass most bills.

In a speech on the Senate floor shortly after watching the president's remarks in Atlanta, Sen. Mitt Romney spoke against doing away with the filibuster and likened Biden to former President Donald Trump regarding elections.

Romney, who opposes the voting rights bill, noted that Biden said in his speech that the goal of some Republicans is to "turn the will of the voters into a mere suggestion."

"And so President Biden goes down the same tragic road taken by President Trump, casting doubt on the reliability of American elections. This is a sad, sad day. I expected more of President Biden who came into office with a stated goal of bringing the country together," Romney said.

State legislatures, he said, can pass anti-voting laws with a simple majority.

"If they can do that, then the United States Senate should be able to protect voting rights by a simple majority," he said. "I support changing the Senate rules which ever way they need to be changed to prevent a minority from blocking action on voting rights."

Biden had previously treaded lightly on the filibuster debate. He opposed any significant changes to the rule during his 36 years in the Senate.

The election and voting rights bills have hit a wall in the Senate, blocked by a Republican-led filibuster and leaving Democrats unable to gain the 60 votes needed to advance them.

The House has approved voting rights legislation, but Democratic Sens. Joe Manchin, of West Virginia, and Kyrsten Sinema, of Arizona, oppose changing Senate rules to get around a GOP filibuster. They have argued that if and when Republicans control the Senate, they could use the lower voting threshold to pass bills Democrats oppose.

Lee said the Democrats are trying to suppress Senate rules because they're inconvenient.

"Dissent is difficult and disagreement can be a nuisance. This is exactly why we have to stop them from doing this," he said during a Senate Republicans' news conference.

Nuking the filibuster, Lee said, would not lead to a good outcome. He said it would lead to a "whiplash" and further uncertainty with regard to the law. It would lead to "great danger" not just to the Senate but to the interests of Americans.

Democrats, he said, know that. "But so strong is their push and their desire to ram through a radical, leftist agenda, that they're willing to ignore these features of the Constitution and the interest that come to be embodied in the United States Senate."

Last week, Lee said the Senate would devolve into a scene from "Lord of the Flies" should Democrats succeed in removing the 60-vote rule to pass most legislation.

In his speech Romney also said Biden said "quite a number of things that weren't true" and said Biden accused Republicans in the Senate of having "sinister, even racist inclinations."

In his speech, Biden said when the voting rights bill goes before the Senate, Democrats, Republicans and independents will have to declare whether they stand for or against voter suppression.

In response, Romney said, "So much for unifying the country and working across the aisle."

Romney said the federal government empowers the minority only in the Senate. That a minority should be afforded such political power is a critical element of the chamber because it leads to middle ground, he said.

"For a law to pass in the Senate, it must appeal to senators in both parties," he said. "This virtually assures that the bill did not originate from the extreme wing of either one."

Romney said that many Republicans believe Trump's lie that the 2020 election was fraudulent and stolen by Democrats.

"Can you imagine the anger that would be ignited if they see Democrats alone rewrite with no Republican involvement whatsoever the voting laws of the country?" he said. "If you want to see division and anger, the Democrats are heading down the right road."

Romney said Democrats in the evenly divided Senate now inconveniently ignore their impassioned defense of the filibuster when they were in the minority.

He also went after former President Barack Obama for calling the rule racist.

"For President Obama to make this absurd charge when he made a vigorous and extensive defense of the filibuster just a few years ago is both jarring and deeply disappointing," Romney said. "After all, I don't recall a single claim from Democrats that employing the filibuster hundreds of times over the last several years when they were in the minority was in any way racist."