President Joe Biden and first lady Jill Biden talk with first responders as they tour a neighborhood in Louisville, Colo., Friday, that was impacted by the recent wildfire. (Susan Walsh, Associated Press)

LOUISVILLE, Colo. — U.S. President Joe Biden, visiting the scene of Colorado's most destructive wildfire on record, said on Friday the rare winter blaze marked the latest "code red" reminder of an ominously changing climate he hopes to confront with his renewable energy agenda.

"We can't ignore the reality that these fires are being supercharged" by global warming, Biden said after touring a neighborhood in the Denver-area town of Louisville reduced to ruins by last week's devastating Marshall Fire.

Two people were missing and feared dead after the wind-driven, prairie-grass fire incinerated more than 1,000 dwellings on Dec. 30-31, making it the most destructive Colorado blaze on record in terms of property losses.

The fire in Boulder County, on the northern outskirts of the Denver metropolitan area, charred 6,000 acres and laid waste to parts of Louisville and the adjacent town of Superior. Fanned by gale-force winds, the flames at times devoured football field-size stretches of drought-parched landscape in seconds.

Biden's trip to Boulder County marked his second as president to Colorado and his second focused on wildfires.

Under bright sunny skies, the president and first lady Jill Biden walked through a flame-ravaged Louisville neighborhood where blackened rubble and scorched tree trunks poked through a blanket of snow. They chatted briefly with emergency workers and families displaced by the blaze.

The president, pausing to embrace some residents and place a hand on the shoulders of others, was joined on the tour by Colorado Gov. Jared Polis and three members of the state's congressional delegation.

"We lost everything," one man said. Biden gave him a hug.

Addressing first-responders and members of the community at a nearby recreation center later, Biden said he was as moved by the scope of devastation he saw as he was by "the incredible courage and resolve that you all show."

"We're going to make sure that everything you need occurs," Biden told the crowd.

He noted the blaze was the latest in a string of highly destructive wildfires in Colorado and elsewhere in the West that experts say are symptomatic of extreme drought and rising temperatures associated with climate change.

"The situation is a blinking code red for our nation," Biden said. 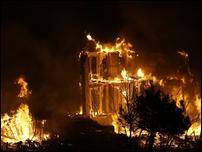 Colorado wildfires: How the West's drought can devastate even in winter

A few snowstorms and cold wintry conditions do not erase the West-wide drought, meaning the chances of a wildfire are not eliminated.

Biden also used the occasion to make a pitch for his chief legislative initiative, the Build Back Better Act, which would funnel billions of dollars to enhanced forest management, firefighting and efforts to reduce carbon emissions.

The bill, opposed by Republicans, passed the Democratic-controlled House of Representatives in November. It must still clear the Senate, where it has yet to secure the needed support of all of Biden's fellow Democrats.

While acknowledging such measures offer no immediate solace to survivors of last week's fire, he said greater investments in renewable energy would spur major job growth while addressing the looming threat of more climate-related calamities.

Biden has declared the latest fire zone on the eastern fringe of the Rocky Mountains a national disaster, freeing up federal funds to assist residents and businesses in recovery efforts.

The normal wildfire season in Colorado does not typically extend into the winter thanks to snow cover and bracing cold. But climate change and rising global temperatures are leaving vegetation in parts of the western United States drier and more incendiary.

Insured losses from the fire are expected to run about $1 billion, according to catastrophe modeling firm Karen Clark & Company.