A crew member leaps to fix a logo for the 2022 Beijing Winter Olympics before a launch ceremony to reveal the motto for the Winter Olympics and Paralympics in Beijing on Sept. 17. (Mark Schiefelbein, Associated Press)

But Romney, the leader of the 2002 Winter Games in Salt Lake City, said a trip to the Chinese capital during the Olympics may be necessary for the Utahns bidding to bring another Winter Games to the state in 2030 or 2034.

The Republican senator said in an interview for ESPN's "Outside the Lines" that while he hadn't spoken to leaders of the Salt Lake City-Utah Committee for the Games about their plans to send a delegation to the Beijing Olympics, they appear to have good reason to go.

Romney said his "understanding from reading news reports is they feel that given the changes in technology and logistics since 2002, when we had the Games last in Salt Lake City, really necessitates them being able to go and see what those changes have been."

That will help the Utah committee "make sure that when we prepare our bid as a nation and as we prepare our Games coming back to the United States, that we are able to deal with some of those changes and logistical requirements."

His comments were not included in the portion of the interview that aired on ESPN but were provided by the senator's office, which said Romney "would underscore the importance of the diplomatic boycott" he has sought since March.

Utah Gov. Spencer Cox said Tuesday the trip needs to be discussed. Cox said bidders will "have to recalibrate, have a conversation, understand exactly what that boycott means for our state and see how we can continue to support the Olympic movement." 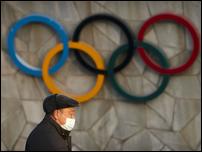 Neither omicron variant nor US diplomatic boycott will stop Beijing Olympics, IOC says

Nothing will keep Beijing's 2022 Winter Games from starting as planned next February, International Olympic Committee officials said Tuesday despite concerns about the new COVID-19 omicron variant — and a diplomatic boycott by the United States.

The White House announced Monday the United States "will not be contributing to the fanfare of the Games" that begin next February in Beijing by sending government representatives.

The action does not affect athletes set to compete in Beijing, unlike the boycott of the 1980 Summer Games in Moscow by the United States and many other nations to protest the Soviet invasion of Afghanistan.

Traditionally, a nation's leader or another top official attends the opening ceremonies of an Olympics as well as some events. The U.S. was represented by first lady Jill Biden at the 2020 Summer Games in Tokyo that were delayed a year due to COVID-19.

In 2002, President George W. Bush was in Utah for the Winter Games' opening ceremonies, held at the University of Utah's Rice-Eccles Stadium. Bush declared the Games open during the ceremonies and sat with TeamUSA, even taking a cell phone call from an athlete's family.

In Beijing, though, the United States and now England and the rest of the United Kingdom, Australia, Canada, New Zealand and Lithuania have all announced they won't have government officials present at the Olympics in China.

In a series of tweets, Romney urged more countries to join the diplomatic boycott against what he has described as China's abuses against ethnic and religious minorities such as the Muslim Uyghurs, as well as dissenters.

"We must link arms with our allies to try to divert the CCP from its current course. Australia, New Zealand, Lithuania, and now our greatest friend—the United Kingdom—have announced a diplomatic boycott of the Beijing Olympics. I hope other free nations join us in this effort," Romney tweeted.

We must link arms with our allies to try to divert the CCP from its current course. Australia, New Zealand, Lithuania, and now our greatest friend—the United Kingdom—have announced a diplomatic boycott of the Beijing Olympics. I hope other free nations join us in this effort. https://t.co/GN0uWKqsez

Romney explained on Twitter, "Withholding diplomats from the Beijing Olympics will bring attention to the Chinese Communist Party's graves human rights abuses, genocide of the Uyghurs, and threat China poses to the global order. It's incumbent upon the media to accurately report on what's happening in China."

The International Olympic Committee has downplayed the diplomatic boycott.

"The IOC has always been concerned with the participation of the athletes," IOC President Thomas Bach of Germany told reporters during a virtual news conference Wednesday when asked if he was concerned about more countries following the lead of the United States.

Bach said the IOC welcomes "the support for the Olympic teams" shown by the governments backing a diplomatic, rather than an athlete, boycott of Beijing. "This is giving the athletes certainty."

He said that's in accordance with a resolution approved by the United Nations calling for the IOC to be supported in its "efforts to use sport as a tool to promote peace, dialogue and reconciliation in areas of conflict" during the upcoming Winter Games.

"The presence of government officials is a purely political decision for each government," Bach said, citing the IOC's "principle of political neutrality."

The competition to host a future Winter Games between Salt Lake City; Vancouver, Canada; Sapporo, Japan; Barcelona, Spain and the Pyrenees mountain region; and Ukraine; only received a brief mention at the news conference.

Asked about why Sapporo should feel comfortable moving forward with a bid given the issues faced by the Tokyo Olympics, Bach offered some encouragement to the Japanese city that hosted the 1972 Winter Games.

Sapporo, the IOC president said, "can be confident in 2030 we will not need the COVID countermeasures as in Tokyo," including those that kept away spectators, sponsors and other participants.

Bach said Sapporo also already has venues that can be used for another Olympics.

"There Sapporo practically has it all," he said. "So it's a very different starting point for Sapporo than it was for Tokyo eight years ago."