Should people who've had COVID-19 get credit for 'natural immunity' if they don't want vaccine?

Matthew James is tested for COVID-19 in Cottonwood Heights on Sept. 30. A bill intended to ensure Utahns who’ve previously had COVID-19 can claim natural immunity against the virus to avoid being required by their employers to get vaccinated or submit to weekly testing is on the agenda for the special session of the Utah Legislature that starts Tuesday. (Jeffrey D. Allred, Deseret News)

SALT LAKE CITY — A bill intended to ensure Utahns who've previously had COVID-19 can claim natural immunity against the virus to avoid being required by their employers to get vaccinated or submit to weekly testing is on the agenda for the special session of the Utah Legislature that starts Tuesday.

"I think the key is we're trying to strike that balance between personal freedoms and public health and government overreach. And it's not easy," said Senate Majority Assistant Whip Kirk Cullimore, R-Draper, the sponsor of SB2004, which expands exemptions to workplace COVID-19 vaccine mandates.

The bill goes beyond the exemptions allowed under new federal rules for President Joe Biden's vaccine mandate for large businesses nationwide that were put on hold Saturday pending a review by the 5th Circuit Court of Appeals at the request of five states, including Utah, and several private companies.

In addition to medical and religious exemptions, the bill would allow a current or prospective employee to claim in a statement that being vaccinated against COVID-19 would "conflict with a sincerely held personal belief" that apparently would not need to be spelled out.

"People need to take a measure of personal responsibility in doing their part for public health, and I don't think it's inappropriate for businesses to do their part as well. But I think there needs to be that leeway in the law that allows for people who have legitimate reasons for being exempted," Cullimore said.

Those reasons include having previously had COVID-19, he said, although what's known as "natural immunity" is not specified in the bill. The U.S. Department of Labor rules do "not offer any exemptions to vaccination requirements based on 'natural immunity' or the presence of antibodies from a previous infection."

Senate President Stuart Adams, R-Layton, who told reporters last week he wanted to see an exemption for Utahns who have had the coronavirus, said the data he's seen suggested they may be more protected against COVID-19 than someone who's fully vaccinated, meaning it's been two week or more since their initial doses.

"Why are they being discriminated against?" Adams asked, since there have been more than 32,000 "breakthrough" cases of the virus among fully vaccinated Utahns. He said he supports vaccinations, including for those who've already had COVID-19, but they shouldn't be treated differently if they don't get the shots.

Cullimore said the conflicts between the bill and the federal rules could be dealt with later, depending on the outcome of the court challenge. Regardless of what happens to the federal mandate, he said the legislation is needed because some Utah businesses are already voluntarily imposing vaccine requirements. 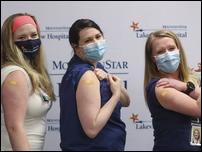 Will the Biden administration's formalization Thursday of a COVID-19 vaccine mandate for large companies nationwide push more Utahns to get the shots?

What experts say about 'natural immunity'

Doctors and public health experts say even someone who has had COVID-19 should be vaccinated against the virus. The Centers for Disease Control and Prevention continues to recommend vaccination against the virus for all eligible persons, including those who have been previously infected.

"The data is clear now," said Dr. Emily Spivak, a University of Utah Health infectious diseases physician, citing recent CDC data from 187 U.S. hospitals that show people who had COVID-19 three to six months ago are at five times higher risk of being infected again than those who've gotten the shots.

An earlier study from Israel found that unvaccinated people previously infected with COVID-19 had greater immunity against the highly contagious delta variant of the virus than those fully vaccinated with the Pfizer vaccine — and also that vaccines enhance the protection provided by having already been sick.

In a report released in late October analyzing those and other studies, the CDC said both people who are fully vaccinated against COVID-19 and those who've previously had the virus have a low risk of subsequent infection for at least six months.

"The take-home is if you've had COVID-19, depending on how long ago it was, you may be protected. But we honestly can't tell you," Spivak said. "There is no question that getting a vaccine after having had COVID-19 really will almost 100% protect you from being in the hospital with COVID-19."

"The concept of recognizing natural immunity is reasonable scientifically, but has some very important practical limitations," Webb said, including what he termed "a commonly held misconception that if natural immunity is valid, preventative measures like social restrictions, masks and vaccines are not necessary."

The reality, he said, is "allowing the infection to simply run its course unchecked would be catastrophic in terms of lives lost, overwhelming health care resources and economic impact." Plus, natural immunity can vary, wanes over time and is difficult to accurately verify with the tests that are currently available.

There's also "concern that embracing natural immunity will undermine vaccination efforts," Webb said, adding that he thinks "it's likely that the unilateral messaging about vaccination without recognizing what we do and do not yet know about the merits of natural immunity has likely enhanced vaccine hesitancy rather than address it."

Spivak said there is "evidence that getting vaccinated after having COVID-19 is much more protective against getting reinfected than natural immunity. Natural immunity can be varied," while vaccine immunity "is very predictable and tends to be sort of standard across groups, across ages and types of patients."

There are a few exceptions, largely people who have a weakened immune system due to leukemia, uncontrolled HIV and other medical conditions, as well as those who require immune-suppressing therapy to treat diseases like some cancers or because they've had an organ transplant.

Han Kim, a professor of public health at Westminster College in Salt Lake City, warned that allowing a personal exemption to a COVID-19 vaccine requirement is "a giant loophole" that permits anyone to opt out of the shots. California and other states have done away with similar exemptions for vaccinations, he said.

Still, Kim said he believes "the hard-core anti-vaccination folks" are a small minority in Utah, since nearly 60% of those eligible for the shots — now anyone 5 and older — are fully vaccinated. He said those opposed to the vaccines are vocal enough that they're "dictating a lot of the politics."