San Jose Earthquakes forward Cristian Espinoza (10) is congratulated by teammates after scoring a goal during the first half of an MLS soccer match against Real Salt Lake, July 27, 2020, in Kissimmee, Fla. San Jose rallied for a 4-3 win over RSL Saturday at Rio Tinto Stadium. (Phelan M. Ebenhack, Associated Press) 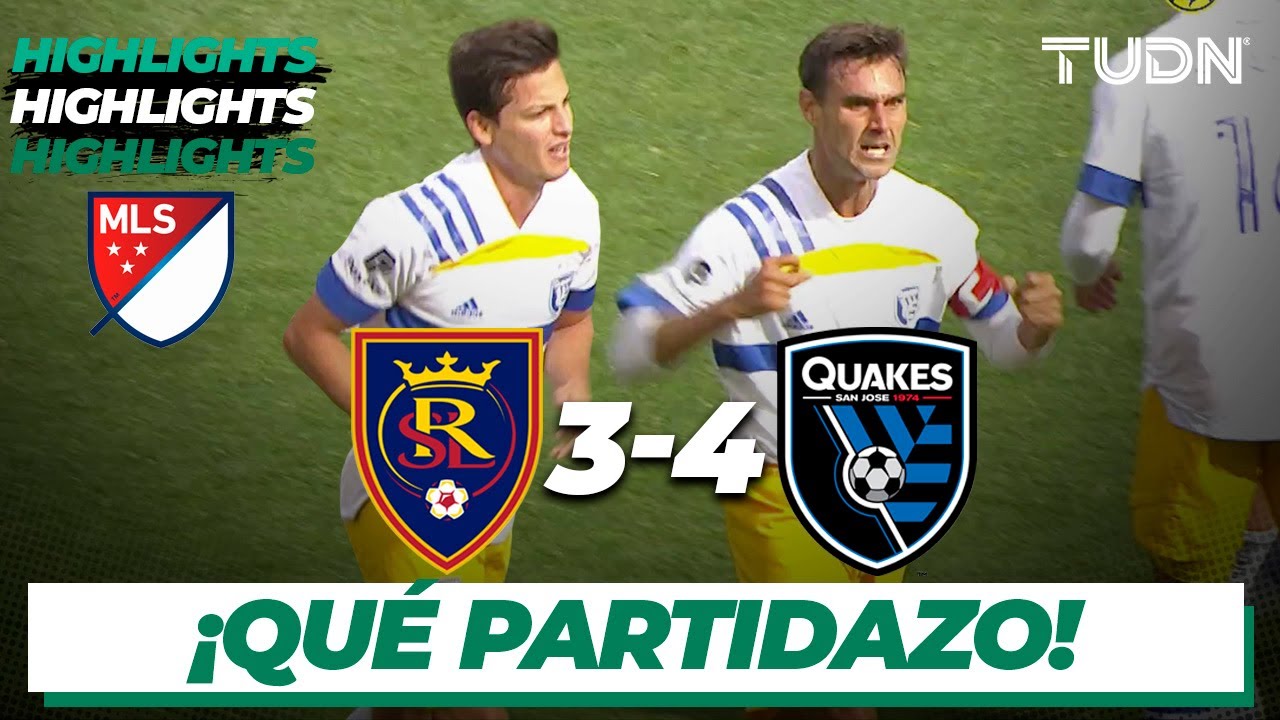 SANDY — A lot can change in Major League Soccer in three days, since the last time Real Salt Lake laced it up for a midweek road match in the Dallas area.

Albert Rusnak scored two goals, Maikel Chang added another, and Aaron Herrera supplied two assists for Real Salt Lake (13-14-6, 45 points), which had a chance to all-but secure its spot in the MLS Cup playoffs but finished with its second loss to an already-eliminated opponent in three matches.

"Given where we are in the season, with a couple of games left and the playoff push for so many teams — it's as disappointing as it comes," Rusnak said. "We had it up to this moment all in our hands. Now depending on other results, it may still be in our hands and it may not be.

"It's a tough one today, because I felt like the majority of the game, we played some good stuff. I felt like we could've added a couple more goals, for sure, but when you don't convert chances, they get some second life back."

With nothing to play for on the season, the already-eliminated Earthquakes (11-13-10, 43 points) punished RSL as it tried to prevent a 1-0 lead from slipping through its fingers.

Rusnak gave RSL an early lead with a right-footed shot from the center of the box off a give-and-go from Damir Kreilach. The captain's ninth goal of the season came from finishing off a cross into the area by Andrew Brody, and gave the hosts a lead it would hold through halftime.

It was as good of a start as Salt Lake could've hoped to achieve. And then, suddenly, it wasn't.

Carlos Fierro equalized on the Earthquakes' first shot on target, a goal against the run of play from a right-sided cross converted in the 37th minute.

RSL out-shot San Jose 9-6 in the first half, including 6-2 on target with 54% of possession. But Wondolowski equalized in the final minute of first-half stoppage time to give San Jose the 2-1 lead at the break.

Moments after receiving a corner kick, San Jose found the back of the net through Major League soccer's all-time leading goal scorer, who headed home his 170th career mark off a cross from Fierro near the corner flag to put the Quakes ahead 2-1 at the break.

"We took the lead," Rusnak said at halftime, "but right now it means nothing."

"We were disappointed at half," Rusnak later added. "The last kick of the first half, we conceded 2-1, and it's a different story going in at 1-1 and 2-1 down. Then obviously in the second half, we kept saying we believe. It was nothing new to us — but we had to sacrifice more bodies in the attack, which left us a bit more open at the back.

"San Jose didn't play for a playoff or anything today, so their front guys stayed high and wide, and punished us. They took advantage of the spaces we left behind."

It's tough to concede a goal. It's more difficult to concede right before the half — with or without what the hosts may have considered to be dubious officiating.

"It's the toughest to concede before half, because you have 15 minutes to have that mental talk in your brain as a player," RSL interim manager Pablo Mastroeni said. "Instead of getting on with the next play, you have time to focus on it.

"I thought we played some of our best stuff, then we got a bit careless … giving the ball away cheaply against a team that likes to break."

RSL was first out of the locker room to change its fortunes after the break. But it was San Jose that took the first advantage of the second half.

Cowell cruised 60 yards on a restart, driving toward goal and slotting home a right-footed banger from the edge of the six-yard box to double the Earthquakes' advantage in the 69th minute 3-1. James Marcinkowski recorded a rare goalkeeper's assist on the play, booting the ball down field after Salt Lake threw numbers into the block on a set piece to find Cowell for the critical third goal from the visitors.

Yueill finished off the scoring in the 80th minute, picking off a masked Nick Besler at the edge of the box and finishing with a cool strike down the center of the lane.

Chang pulled one back in the 85th minute for RSL, finishing a cross by Herrera that Anderson Julio attempted before the Cuban winger finished inside the far post to pull the hosts within 4-2 before Rusnak scored his second in stoppage time for the final margin in a match that looked haphazard but had all the markings of a typical Earthquakes blueprint.

A lot can change in a short time in Major League Soccer, especially for clubs hanging out around the fringes of the postseason bubble like RSL has done for the past month.

Maikel Chang brings one back. pic.twitter.com/9ddk6YzQM6

On Wednesday, Real Salt Lake was staring up at a 1-0 deficit on the road at previously eliminated FC Dallas. The club's playoff hopes didn't formally hang in the balance, but it felt that way.

But with Justin Meram's late sub and two dynamic assists later, Salt Lake was walking away from Frisco with just their second-ever road win over the Hoops. That gave them three points and vaulted them just over the playoff line to No. 7 in the Western Conference — with a chance to secure their postseason fate over the weekend.

Those games aren't scheduled until Sunday or Monday. But every scenario started with the common denominator: a win over the Earthquakes.

Even that proved to be too much to for an RSL side playing its penultimate home match.

Every game is a must-win now, and Wednesday's regular-season home finale against Portland (8 p.m. MT, ESPN2) certainly fits the billing. But the match with the Timbers, who are chasing a home playoff game themselves at 15-13-4 and fourth in the West, may be even more critical than that.

"In professional sports, you've got to have a short memory," Mastroeni said. "You can't sit there and celebrate wins, and you've got to dust off losses. The important thing for me was that the guys hung in there, even down 4-1. I know that sounds ridiculous, but it says a lot about the willingness to keep going forward. That's what we're going to have against Portland."