A father and son walk past a College of Engineering at the University of Utah sign during the university’s annual Engineering Day event on campus in Salt Lake City, Nov. 23, 2019. (Colter Peterson, Deseret News)

SALT LAKE CITY — A whopping $15 million gift from Utah philanthropists John and Marcia Price is seeding a new facility for the University of Utah's College of Engineering that will not only help address current overcrowding in the school's popular computer science disciplines, but help the U. double the number of graduates in those red-hot professional tracks.

The gift, announced Wednesday, turbocharges a $30 million private fundraising campaign for the new, $120 million six-story, 209,000-square-foot building that will be located in the U.'s emerging "tech corridor" near the Warnock Engineering Building and Sorenson Molecular Biotechnology Building on the north end of campus.

"We are pleased to lend our support to this effort that is so crucial to Utah's expanding economy," John Price said in a statement. "The University of Utah has an international reputation for innovation in computer science, and Marcia and I want to help ensure that opportunity for this generation and all future generations of Utah students."

U. College of Engineering Dean Richard Brown said when he took over his position in 2004, freshman enrollees in the college represented about 7% of all incoming freshmen at the school. That rate, Brown said, has increased to 23%, and students in the school of computing make it the biggest single major at the university. Current total enrollees in the school of computing exceed 1,900 students.

Utah's booming tech sector is helping fuel a feeding frenzy for fresh computer science grads who are, according to a recent U. survey, earning an average starting salary north of $86,000 a year right out of school.

"These companies can't hire enough people to fill the positions they have," Brown said. "We had an industrial advisory board meeting last week where people from (aerospace giant) Northrop Grumman said we need to hire 600 engineers and computer scientists right now and that many for the next five to seven years."

Brown said current facilities are bursting at the seams with some required courses having to be held in auditoriums to facilitate the growing number of computer science students, including a record 600 freshmen this year.

The Prices are prolific supporters of education and arts programs at the U. and in the wider community.

According to a press release, John Price is a former U.S. ambassador to Mauritius, Comoros and the Seychelles. He moved to Utah as a teenager and earned a bachelor's degree in geological engineering at the U. in 1956. Price started his career as the founder of a construction company, which developed into JP Realty and was listed on the New York Stock Exchange in 1994. 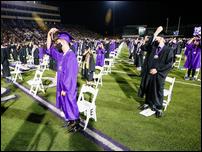 Utah is getting out of the student loan servicing business, which could result in the creation of a $289 million endowment for scholarships and grants for Utah students.

Price is known as one of Utah's most prominent businessmen, with success throughout the Intermountain region. He has also served on numerous local, state and national boards, including the U. board of trustees from 1992 to 1999.

Marcia Price is a leader in the arts community, with a lifelong passion for the Utah Museum of Fine Arts where she serves as board chairwoman. She has devoted herself to advancing the arts in Utah, serving as chairwoman of the Utah Arts Council and later helping to establish Salt Lake County's Zoo, Arts and Parks Program. Price received an honorary doctorate of fine arts from the University of Utah in 2006. The fine arts building as well as the new theater arts building and amphitheater are named in honor of the Prices' contributions to the arts.

Brown said the new computer science facility will accommodate 3,200 new students, most of which will be in various courses of study under the computer science umbrella. The U. accounts for 50% of the computer science graduates coming out of Utah public universities and will be able to double that output with the program expansions the new building will facilitate.

Some notable alumni from the U.'s college of engineering will help spearhead the private fundraising campaign including Ed Catmull, Shane Robison and John Warnock. The U. is set to seek a budget appropriation of $90 million from state legislators in the upcoming 2022 session to cover the remaining costs of the project which, pending approval of that funding, could be online by 2024.

Brown said the facility represents an investment in Utah's economic future and one not unlike the wildly successful Utah Engineering Initiative launched by former Gov. Mike Leavitt in 2000 that aimed to double the number of engineering graduates coming out of Utah schools.

At the U., that goal has been met and then some, with the college now graduating three times as many engineers since the program debuted. The effort is widely considered to be one of the major catalysts behind Utah's booming tech sector, which now accounts for 1 in 7 jobs across the state and pumps tens of billions into the economy every year.