Newly released police body camera video provided by the Moab Police Department shows Gabby Petito talking to a police officer after the van she was riding in was pulled over near Arches National Park on Aug. 12. Petito and her boyfriend, Brian Laundrie, whom she was traveling the country with, had been in a fight in Moab, according to witnesses. (Moab Police Department)

MOAB — Moab police have released new body-worn camera footage of the high-profile incident involving Gabby Petito and Brian Laundrie outside of Arches National Park on Aug. 12, giving the public a new perspective on how police handled the incident — a perspective that has led to both criticism toward responding officers and sympathy.

"There's two people that came to us and said they saw him hit you," Moab police officer Eric Pratt tells Petito in the footage. At that point, she is sitting in the back of a patrol car, crying.

"To be honest I hit him first," Petito responds, before telling Pratt "he grabbed my face, I guess, he didn't like, hit me in the face, he didn't punch me in the face or anything ... he grabbed me with his nail, I definitely have a cut right here, when I touch it, it burns."

Police initially responded to the incident after a witness called 911, reporting Laundrie was "slapping the girl ... they ran up and down the sidewalk. He proceeded to hit her, hopped in the car, and they drove off."

In previously released footage from the Moab police department, it was unclear whether that information was conveyed to responding officers. But in the video released Thursday, Pratt is clear from his first interaction with Laundrie that they are responding to a call that he says involved a "male hitting a female and the two of them getting in this vehicle and driving off."

"I, I don't have time to defend myself by sitting here. But I pushed her away. She gets really worked up, and when she does she swings and she had her cellphone in her hand. So, I was just trying to push her away," Laundrie responds.

Pratt then walks over to speak with Petito, who admits Laundrie hit her but then quickly shifts the blame onto herself, telling officers she slapped Laundrie, and was hitting his arm as he tried to pull over the van.

After speaking again with Laundrie, Pratt calls a witness — not the initial 911 caller, although the witness does tell Pratt he did confer with that person.

Pratt asks the man whether he saw Laundrie hit Petito.

"It was unclear what was going on for me, but it did seem like he was ... trying to close off the passenger side of the vehicle and close things up.

"The whole thing was off ... I didn't see anything like him taking after her or hitting her, or vice versa, it was kind of light and they were almost kind of laughing and I wasn't sure whether they were just joking around ... but then it got more strange as the vehicle was about to drive off."

Police would later deem Petito the aggressor but did not pursue charges. Laundrie was taken to a hotel, and Petito drove off with the van.

The two later reunited and left Moab together, passing through Salt Lake City on their way to Wyoming. On Sept. 19, Petito's body was found on the outskirts of Grand Teton National Park.

A focal point in the case, the incident outside of Arches National Park, has been critical to the public's understanding of Petito and Laundrie's relationship. Moab police's handling of the situation has received widespread criticism, as many wondered how they could place Laundrie, who towered over his finance, as the victim and Petito the aggressor.

Moab Police Chief Bret Edge has taken a leave of absence for unspecified reasons under the Family and Medical Leave Act, and the city says an "unaffiliated law enforcement agency" will launch an investigation into how officers handled the call.

Experts say that while it's easy to critique the footage, the situation is emblematic of the complex relationship between law enforcement and domestic abuse.

"Some of the behaviors that Gabby presents when they are engaging with her are common for somebody who's being abused," says Liz Sollis with the Utah Domestic Violence Coalition.

She is sobbing and apologetic. She doesn't want to leave Laundrie and places much of the blame on herself. The contrast between the two — Laundrie calm, soft-spoken and laughing, Petito unable to control her emotions and at one point hyperventilating — is also a red flag.

But Sollis says that Petito's body language and behavior are also typical for someone experiencing an "emotional situation."

"None of that's uncommon. Her response was, I would say, pretty normal," she told the Deseret News.

Arches park ranger Melissa Hulls, the lone female officer who responded to the call on Aug. 12, told the Deseret News in a previous interview the relationship did not seem unsafe. Toxic, yes, but posing a physical threat to either of them, no.

"It's not that we didn't think he was manipulative, but we have to worry about the safety, and not the psychology of it," she told the Deseret News. "If he's manipulative, that doesn't mean we have the legal right to keep them apart, or just arrest him based off that."

Domestic incidents can sometimes dominate a police officer's day — and most of the time, they don't end in tragedy, says Katie Hood, CEO of One Love, an organization that seeks to educate young people about unhealthy relationships.

In New York City, where One Love is based, Hood says police respond to 230,000 domestic incidents each year. That's 600 per day.

"Most of them do not end with somebody being killed and I think the police are in a tough spot, trying to figure out where to intervene and where to not," Hood said. 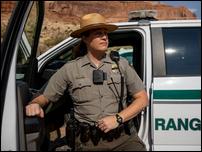 On Aug. 12, Melissa Hulls heard a call come over her radio of a possible domestic assault, stemming from an argument in Moab between Gabby Petito and her fiance, Brian Laundrie.

Abusive relationships almost never start out as physically abusive, both Hood and Sollis say. Instead, the emotional, verbal and financial abuse snowballs, with the aggressor often gaslighting and isolating the victim.

"If somebody punched you on the first date, you'd be out the door. That's not what happens. What happens is a buildup," Hood said.

In general, Hood thinks that police need to be better trained when approaching domestic incidents, and to "validate that emotional abuse is devastating and real." But the real change, she says, starts with education.

"Let's teach young people the signs of emotionally unhealthy relationships so that when they see these behaviors, they can be like, 'I've got to get out of this before it becomes (physically) abusive,'" she said.

How does Sollis think the Moab police should have responded to the incident?

"With understanding, patience and knowledge of resources. And based on the information that I have, I feel like that is what they did," says Sollis. "Is there room for improvement? Always. We can always be looking at ways we can improve things, whether it's policy, whether it's response or whether it's resources."

She says the criticism is understandable. The case has captivated the country, and the search for Brian Laundrie, whose whereabouts remain unknown, is still garnering national headlines each day.

"I think that there's a lot of things that we need to consider but pointing the finger at law enforcement isn't the solution," Sollis said. "The solution is figuring out ways to prevent domestic violence before it gets to a point where somebody takes the life of another person."

If you have questions or concerns about domestic abuse, please call the Utah Domestic Violence Coalition's hotline at 1-800-897-5465.