All missing persons should get same public attention as Gabby Petito, her father says

Joseph Petito, father of Gabby Petito, whose death on a cross-country trip has sparked a manhunt for her boyfriend Brian Laundrie, speaks during a news conference Tuesday in Bohemia, N.Y. (John Minchillo, Associated Press) 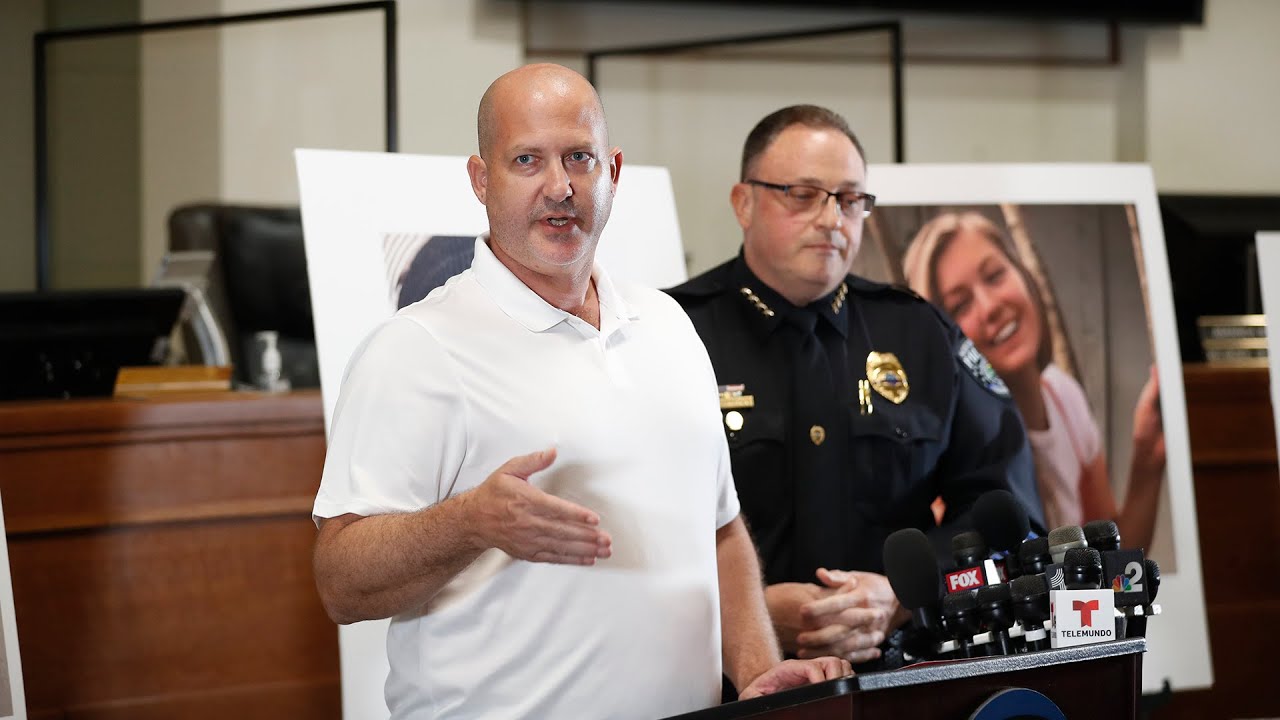 SALT LAKE CITY — Rapid and widespread sharing of Gabby Petito's image on social media after she disappeared was "very helpful in bringing our daughter home," along with news coverage, her father said Tuesday.

Other missing person cases should receive the same sort of public attention, Joe Petito said during a Tuesday news conference in New York.

"I don't want to dismiss the ridiculously hard work that the FBI and law enforcement all around did," he said. "But social media has been amazing and very influential. And to be honest, it should continue for other people. The same type of heightened awareness should be continued for everyone — everyone."

Wearing pins with blue ribbons, Petito's family members announced a new foundation in her name Tuesday and displayed fresh tattoos matching those Petito wore: the words "Let it be" in script on her forearm, with a line drawing of a wave, as well as a vine wrapped around a finger. Her mother, Nicole Schmidt, displayed another tattoo of a flower in thin lines that her daughter had designed.

"I wanted to have her with me all the time," Schmidt said before wiping away tears.

The family and their attorney declined to talk about details of the investigation but praised investigators' efforts to track down Laundrie. They are still defining the foundation's role but want to support others whose loved ones are missing.

Some days the family is consumed by pain, grief and anger, said Petito's stepfather, Jim Schmidt, but they try to stop and remember the good memories they shared with the happy 22-year-old who was drawn to explore the American West.

"That's what picks you up," Jim Schmidt said. "That's what carries you through, and hopefully will keep us going from here on out."

A scaled-back search in Florida

The FBI is scaling back its search for Gabby Petito's fiance, Brian Laundrie, to be more targeted based on intelligence after officials spent more than 10 days combing through a 25,000-acre nature reserve, police in North Point, Florida, said Monday.

The development came after the FBI visited Laundrie's family home to request personal items of his to assist with DNA matching, the Laundries' lawyer told multiple news outlets.

Laundrie's parents told investigators they last saw him on Sept. 14, three days after Petito was reported missing. His parents told police he left their home with a backpack, saying he was going to the nearby Carlton Reserve.

A source close to the family told CNN's Chris Cuomo Laundrie left his parents' home without his cellphone and wallet and his parents were concerned that he might hurt himself.

That weekend, the search for Laundrie became more critical when authorities found Petito's remains in Wyoming's Bridger-Teton National Forest. A coroner ruled her death a homicide.

Before Tuesday, Petito's family asked for privacy following the discovery of her remains, only making comments about the woman they described as happy, loving and adventurous online and at some of the many memorials held in her honor.

Petito's case has highlighted the tens of thousands of missing persons' cases across the country and stirred heartbreak and outrage in many.

The looming questions surrounding what happened on her road trip with Laundrie has spurred digital detectives to comb through the couple's online trail to try to solve the case and surfaced reports that tension may have been building between the couple.

The first reports of conflict between the two came on Aug. 12, when a 911 caller in Moab told dispatchers he wanted to report a domestic dispute and described a white van with a Florida license plate.

"We drove by and the gentleman was slapping the girl," the caller said. He went on to say, "Then we stopped. They ran up and down the sidewalk. He proceeded to hit her, hopped in the car and they drove off."

CNN obtained dispatch audio recordings from the Grand County Sheriff's Office Monday that shed more light on what Moab police were told about "some sort of altercation." According to the audio, the dispatcher told the officer that "a male hit a female" and that they got into a white Ford Transit van.

Police located the white van and initiated a stop near the entrance to Arches National Park. Petito and Laundrie were in the van.

In his police report, officer Eric Pratt said Petito had slapped Laundrie, "who grabbed her face and pushed her back as she pressed upon him and the van."

Another responding officer, Daniel Robbins, said Petito had "gone into a manic state" when Laundrie tried to "separate from her so they could both calm their emotions." The officer reported seeing "minor visible scratches" on Laundrie's face.

"He wouldn't let me in the car before," Petito said.

The officer asks Petito, "Because of your OCD?"

She responds, "He told me I needed to calm down, but I'm already calm."

"I have OCD and sometimes I get really frustrated," she said.

According to police, the officers suggested the couple go their separate ways that night and no charges were filed.

Moab Assistant Police Chief Braydon Palmer said his department is asking an outside agency to investigate the city's handling of the dispute on Aug. 12, but did not specify the agency.

The search for Laundrie

Laundrie returned to the Florida home he shared with his parents on Sept. 1 without Petito, and authorities have been looking for him to provide answers.

Initially, he wasn't wanted on any charges, but Laundrie now faces a federal warrant for his arrest for the "use of unauthorized devices" stemming from his alleged actions following Petito's death. Laundrie allegedly used a debit card and PIN number for accounts that did not belong to him for charges exceeding $1,000 between the dates of Aug. 30 and Sept. 1, according to a federal indictment.

An attorney for Laundrie's family emphasized in a statement that the warrant is not for Petito's death but related to activities that allegedly took place afterward.

Two separate rewards totaling $30,000 have been offered to anyone who provides law enforcement officials with Laundrie's whereabouts.

FBI agents returned to the Laundrie home Sunday, as seen in video shot by CNN. At least two agents could be seen at the home and one had a bag in his hand.

During the agency's visit to the family home, "The FBI requested some personal items belonging to Brian Laundrie to assist them with DNA matching and Brian's parents provided the FBI with what they could," the Laundries' lawyer, Steven Bertolino, told multiple news outlets.

'Enjoy every moment of this beautiful world, as she did'

As investigators continued their search for Laundrie Sunday, friends, family and strangers gathered in Holbrook, New York, to pay their respects to Petito.

Joe Petito described his daughter in a eulogy as a "happy girl," who people would gravitate toward. She made others feel welcome, he said, and she loved being outdoors, scuba diving, hiking the Appalachian Trail or snowboarding down sand dunes in Colorado.

"I want you to be inspired by Gabby, that's what we're looking for," Joe Petito said. "If there's a trip that you guys want to take, take it now. Do it now while you've got the time.

"If there's a relationship that you're in that might not be the best thing for you, leave it now," he said, an apparent reference to his daughter's relationship with Laundrie.

Petito's stepfather, Jim Schmidt, also gave a eulogy, telling those gathered, "Parents aren't supposed to bury their children. That's not how this is supposed to work."

Petito provides "an example for all of us to live by," Schmidt said, "to enjoy every moment in this beautiful world, as she did — to love and give love to all like she did."