BOUNTIFUL — Utah is tracking the movements of those who drive electric cars as it looks for a way to take in tax money.

It has a Bountiful man worried about privacy and security, so he called the KSL Investigators to look into it.

Most of the money used to build and maintain our roads comes from the tax we pay with every gallon of gas we pump. But when electric vehicles hit the road, it created an issue.

Suddenly, you have thousands of cars that are using state roads but not paying for them. So, the Utah Legislature came up with a solution, but it is one that has raised privacy concerns.

When Floyd McDermott bought his set of electric wheels, the state issued him a track that logs his car's movements and then sends him a bill – 1 1/2 cents for every mile driven.

"I was concerned about some privacy issues," McDermott said about the device.

In addition to tracking his movements, the gizmo communicates with an app McDermott said he was instructed to download to his smartphone.

He worries a breach in the app's security could leave his phone exposed.

"Can somebody, through a back door, get into my cellphone and find out what's going on with me that I don't want them to know?" McDermott asked.

"We have taken every measure possible to make sure that data protection is secure," said Tiffany Pocock, program manager for the Utah Department of Transportation's Road Usage Charge.

She said UDOT took great care to make sure the driving data collected by those trackers is secure.

We have taken every measure possible to make sure that data protection is secure.

"We partnered with some industry leaders that have been doing tolling and data security data privacy for a long time," she explained.

In fact, Pocock said UDOT does not even have access to GPS data. It can only see how many miles are logged so they can send out bills.

As for the phone app, it is for the driver to see their mileage for themselves, but there is no need to download it.

"The device itself has a cell chip that's talking right to the account manager," said Pocock. "It's not connected to your phone."

But, perhaps most importantly, the state knew this program would not sit well with some people worried about privacy, and since data security can never be 100% guaranteed, lawmakers built in an out. 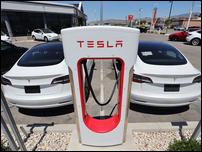 Ready to try an electric car? Good luck finding one in Utah

It may feel like the perfect time to buy your first electric vehicle. But if you're a Utah resident, you might want to keep that extra-long extension cord bundled up for the time being.

"It's a voluntary program," affirmed Pocock.

Still, UDOT's answers do not alleviate McDermott's concerns. He told the KSL Investigators he will return the tracker and pay that flat rate.

For people who don't put a lot of miles on their electric vehicles, going with the tracker chip will be cheaper than paying a flat rate. And, that flat rate is not set in stone. In fact, it has already gone up in 2020 and 2021.

Matt Gephardt
Matt Gephardt has worked in television news for more than 20 years, and as a reporter since 2010. He is now a consumer investigative reporter for KSL TV. You can find Matt on Twitter at @KSLmatt or email him at matt@ksl.com.