A help wanted sign is posted at a taco stand in Solana Beach, California, on July 17, 2017. (Mike Blake, Reuters)

WASHINGTON — The August slowdown in U.S. job creation hit harder in states that pulled the plug early on enhanced federal unemployment benefits, places where an intense summertime surge of coronavirus cases may have held back the hoped-for job growth.

New state-level data released Friday by the Bureau of Labor Statistics showed the group of mostly Republican led states that dropped a $300 weekly unemployment benefit over the summer added jobs in August at less than half the pace of states that retained the benefits.

Elected leaders in those states argued the payments, in place since spring of 2020 to help families through the pandemic, were discouraging people from work and holding back an economic recovery that seemed to be gathering steam earlier this year when the impact of vaccines was taking hold and coronavirus cases were falling.

But some of those same states, notably Florida and Texas, are also hotbeds of opposition to government health mandates like mask wearing, and the surge of infections there in July and August appeared to dent hiring across the sorts of "close contact" businesses that have suffered most during the health crisis and had begun to recover quickly.

Overall employment in the leisure and hospitality fell about 0.5% in the 26 states that ended benefits, and rose 1% elsewhere.

In Florida, where the weekly average of new cases per 100,000 residents jumped from less than 50 in June to more than 700 in August, employment in the sector declined by 4,000 after rising steadily this year.

In Texas, where new infections per 100,000 hit a low of fewer than 30 in June only to surge above 400 through August, the sector dropped 25,000 jobs after six months of steady growth. Georgia, which also saw a dramatic rise in infections, lost nearly 7,000 jobs in the sector.

By contrast California and New York, where the outbreaks driven by the coronavirus delta variant have been more muted and health controls have tended to be more strict, added around 33,000 and 7,000 jobs in the sector respectively.

The data feed into a debate about how the end of pandemic unemployment benefits will impact the economy — whether it will motivate people to take jobs or leave them strapped for cash amid a new viral wave and difficulties with issues like finding child care.

The benefits ended nationally in early September, and some economists have noted that the hand off from those public payments to private income may not come fast enough to avoid a hit to the overall economy. 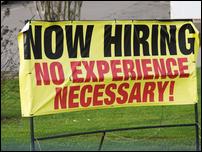 Utah bet on dropping pandemic benefits to get people back to work. It hasn't so far

Gov. Spencer Cox hoped to compel more job-search efforts among jobless Utahns when deciding to suspend pandemic-related federal unemployment insurance benefits on June 26. But a new study suggests the plan hasn't quite led to those outcomes, and Utah's nation-leading economy may be at least partially to blame.

While the delta variant wave of infections may be peaking, the economy's weak August job growth of just 235,000 was viewed by many analysts as evidence of the risks the pandemic still poses to the recovery.

Economists analyzing the unemployment issue have seen little evidence yet that cutting off the benefits has provided a clear boost to local labor markets, in part because of difficulties separating the influence of the payments from larger shifts in the labor force, or of the potentially offsetting damage done by the pandemic.

Goldman Sachs analysts, looking at individual level data, have found that the end of the payments did increase the probability of someone moving from unemployment to a job, and expect the national expiration of the extra unemployment insurance to lead to the addition of an extra 1.3 million jobs by the end of the year.

"The behavioral response to UI-benefit expiration remains highly uncertain due to the unprecedented size of the benefit swings and the highly unusual economic and health situation," Goldman economist Joseph Briggs wrote on Friday.