COVID-19 is overwhelming Utah's hospitals. What are state leaders going to do about it?

The governor is not entertaining a statewide mask mandate or calling a special session, but he and his administration presented to legislators data showing the sobering trajectory of hospitalizations, COVID-19 case spread as the delta variant rages on, and concerns about school outbreaks adding fuel to the fire. He asked for input on what state leaders can do to help clamp down on the spread — if anything.

Cox met with the House GOP caucus and a joint House and Senate Democratic caucus on Wednesday. His meeting with the Senate GOP caucus was Thursday.

Several legislators who attended the House Republican's closed caucus meeting — speaking on condition of anonymity because they were not authorized to discuss the closed virtual meeting — described it as a "brainstorming" session that resulted in no set solutions.

But what was discussed was ways to incentivize more Utahns to get vaccinated, especially teenagers 12 and older. Discussions also contemplated a "free market" solution that may lead to an increase of insurance rates for those that have not received the shot.

"The governor did not ask for a statewide mask mandate, and we agree," House Speaker Brad Wilson, R-Kaysville, said in a prepared statement issued after Wednesday's House GOP caucus meeting. The speaker said House GOP caucus members presented "several additional measures that should be taken to protect Utahns."

"Delivering clear and accurate information directly to parents related to conditions in their children's respective schools will greatly enhance their ability to make informed decisions," Wilson said. "Additionally, placing added emphasis on increasing vaccination rates among 12- to 18-year-olds will have a significant impact on reducing the spread of COVID-19 in our secondary schools."

House Republicans also floated the idea of reopening the Mountain America Expo Center in Sandy as a stand-up COVID-19 hospital unit — but the governor pointed out even if they did, they'd likely struggle to find nurses and doctors to staff it. Low morale, burnout and frustration are driving nurses away from the profession.

"We recognize the pressure this pandemic has placed on our health care workers over the past 18 months and sincerely thank them for their dedicated service," Wilson said. "Vaccination remains the most effective way to protect yourself and your loved ones. We encourage Utahns to consult with their medical providers regarding the benefits of vaccination and commit to do their part to reduce the burden on our health care system."

"We need to do a better job of making people aware of it, especially the medically frail," Adams said, noting the treatment has a 60% to 80% effective rate of keeping people out of the hospital. "That's pretty significant."

House legislators and Adams said Cox did not spend time discussing a pair of public health orders he's been considering to give school districts more streamlined tools to clamp down on COVID-19 outbreaks, including the ability to temporarily require face masks at a certain case rate threshold. 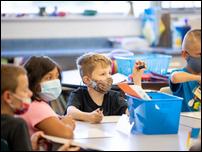 Masks in schools? A behind-the-scenes look at Gov. Cox's conversations about allowing requirements

Gov. Spencer Cox is mulling a pair of potential public health orders to give school districts more tools in their arsenal to clamp down on COVID-19 outbreaks — including allowing the ability to temporarily require face masks at a certain case rate threshold.

Based on feedback the governor received in meetings earlier this month with school and health officials, most superintendents believe they already have the tools they need under current state law to respond to COVID-19 outbreaks. Some counties in Utah — Grand, Summit and Salt Lake — have already exercised mask requirements. However, the Salt Lake County order was quickly overturned by the Salt Lake County Council on a vote of 6-3.

Under current state law, if schools hit a COVID-19 case rate of 2%, they're already required to participate in a "test to stay" to continue in-person learning. But the public health orders Cox is mulling could implement the "Test to Stay" program at a 1% case rate threshold — and require school masking. If Cox and Utah Department of Health officials decide to move forward with the proposal, it would have a 30-day expiration and be subject to approval or termination by a vote of the Utah Legislature.

"It is important to clarify, the Legislature has not banned masks or mask mandates," Wilson said. "Conversely, we have established policies empowering local health departments to coordinate with county governments to address their respective needs — including the needs of the schools — based on changing conditions.

"Those measures could include policies specific to individual schools, Test to Stay, or mask mandates," Wilson added. "Based on feedback from superintendents during a meeting last week, we remain confident that local health and county officials are the appropriate decision-makers with respect to this issue."

Cox told the Deseret News earlier this week he's not interested in issuing orders that are going to end up overridden by legislators anyway.

"I'm not going to issue an order that gets overturned. That's silly," Cox said in that interview. "It might make a few people happy, but it doesn't accomplish anything."

Based on the data Cox and his administration presented, one House GOP lawmaker described the governor's overall message as, "This is serious and if it keeps going the direction it is, we may have to do something."

Lawmakers described the meetings as "cordial," with some appreciative of the governor for involving them in the discussions.

House Minority Leader Brian King, D-Salt Lake City, said the governor discussed many of the same things in his meeting with House and Senate Democratic legislators. King said it seemed apparent the governor is grappling with what executive powers he's left with after the so-called "endgame" legislation the Utah Legislature approved earlier this year, which ended COVID-19 restrictions on state and local levels and limits government officials' ability to issue new restrictions like mask mandates.

Another law also passed earlier this year, SB195, limits durations of public health orders to 30 days and requires legislative approval — whether that's from the Legislature, or city or county councils, depending on jurisdiction.

King said he believes Cox will "do what he can with the executive powers that he has, but if he thinks that the Legislature, if he acted aggressively and proactively in a way that the Legislature would not see eye-to-eye with him on ... I don't think that he's anxious to go down that road because he thinks in some ways it would do more harm than it would good. And he may very well be right about that."