Annie Sullivan draws a COVID-19 vaccine at the Legacy Events Center in Farmington on May 13 where the Davis County Health Department offered Pfizer-BioNTech vaccines to anyone 12 years of age and older. (Jeffrey D. Allred, Deseret News)

SALT LAKE CITY — Remember Utah's mass COVID-19 vaccination sites? They may be coming back to the state to deliver booster shots against the deadly virus.

Last month, President Joe Biden announced that Americans should get booster shots eight months after their second dose of Pfizer or Moderna vaccine as additional protection against the highly contagious and likely more virulent delta variant of the virus.

The White House plan, which eventually could also include a second shot of the single dose Johnson & Johnson vaccine, called for starting the booster shots the week of Sept. 20 to long-term care facility residents and staffs along with health care workers who were the first to receive the coronavirus vaccines rolled out late last year.

But the administration is still waiting for a full review and approval of the booster shots from the federal Food and Drug Administration as well as the Centers for Disease Control and Prevention, possibly delaying the start date as the debate continues about whether the additional doses should be given to the general public.

Already, third shots are available in Utah and other states for the moderately to severely immunocompromised due to organ transplants and treatments for cancer or HIV. The Utah Department of Health is not tracking how many of those patients have received an extra vaccine dose, but does expect to track widely available booster doses.

Rich Lakin, immunizations director for the state health department, said preparations are underway for getting booster shots out to Utahns once the federal government gives the go-ahead. He said the state is working with local health departments, contractors, pharmacies, health care systems and others to be ready.

"It's difficult to plan, knowing that we don't know when the specific date is," Lakin said, although he believes the state can be set to begin offering booster shots whenever the approval comes. "We're flexible. It doesn't matter whether it starts Sept. 20 or months later."

Most Utahns would be eight months out from their second COVID-19 shots in late November through January, he said, so that's when mass vaccination clinics would likely open again along the Wasatch Front. There won't be as many as there were last winter, when Utahns jammed phone lines and websites to make vaccine appointments.

Then, demand exceeded supply, so the state initially limited access to specific groups considered more vulnerable to the virus, including teachers and the elderly. Now, anyone 12 and older can get vaccinated at some 1,300 locations across the state, including their doctor's office and pop-up clinics in supermarket parking lots.

Lakin said the booster shots should also be easy to get.

"There shouldn't be a limit to supply whatsoever," he said, noting vaccine providers now order vaccines directly from the state, which receives doses from the federal government. And although providers have been told the third doses right now are only for immunocompromised, Lakin said some Utahns don't want to wait.

"We do have reports of people that are trying to go get the third dose. Some people are just giving in and some people are screening," he said. "Nothing's stopping them, other than the ACIP (the CDC's Advisory Committee on Immunization Practices) hasn't made the recommendation." 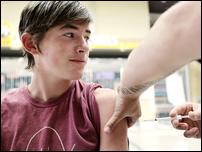 What gets you more 'bang for the buck,' COVID-19 booster shots or vaccination campaigns?

The fight against COVID-19 needs to stay focused on getting more Utahns vaccinated against the deadly virus, not shift to supplying additional doses to those who've already gotten the shots, a pair of University of Utah Health experts said.

Utah, like many states, has struggled to get enough residents fully vaccinated against the virus, meaning it's been two weeks or more since their final dose, to slow the spread of the delta variant that's sparked a surge in cases, hospitalizations and deaths around the country.

As of Friday, less than half of all Utahns were fully vaccinated while the state health department reported 1,635 new cases and six additional deaths from COVID-19. A day earlier, Utah recorded its second youth death from the virus, an unvaccinated Salt Lake County teenager who was hospitalized at the time of her death.

Han Kim, a professor of public health at Westminster College in Salt Lake City, isn't sure whether booster shots are necessary.

"I'm still not entirely convinced we need boosters, at least in healthy populations," Kim said, calling new data from Israel about the efficacy of COVID-19 booster shots "murky at best" even though it was deemed "dramatic" this week by Dr. Anthony Fauci, Biden's chief medical advisor.

Fauci said Thursday during a White House COVID-19 Response Team press briefing that 12 or more days after the third dose of Pfizer vaccine given to some 1.1 million Israelis 60 and older this summer, "there was a greater than tenfold diminution in the relative risk of both confirmed infection and severe disease."

But The New York Times reported Friday that the White House is being asked to scale back plans for COVID-19 booster shots to give federal health agencies more time to review the data, including submissions from the pharmaceutical companies.

Utah Sen. Mitt Romney has called for faster action on coronavirus booster shots. The Utah Republican expressed frustration during a U.S. Senate hearing in July that they were not yet available in the United States saying, "There are a number of us that would get in line to get a booster."

Others, including Kim, have raised concerns about booster doses becoming available in wealthier countries while many high-risk populations around the world don't have adequate access to coronavirus vaccines. The World Health Organization called last month for a moratorium on booster doses through the end of September.

Kim said given the questions about the latest data along with "the ethical and moral issues of vaccine distribution, it's incredibly problematic. For those in long-term care facilities, those who are immunocompromised, and possibly those who are older, this might make sense. For the rest, not so much."

Instead of gearing up for booster shots, the professor said Utah should be trying to get more people vaccinated.

"I think it's far more important to focus on vaccinating those who haven't yet received it," Kim said. "That will do far more to reduce numbers than boosters."