'It's our worst game in 2021': After turbulent week, Real Salt Lake falls at Vancouver 4-1 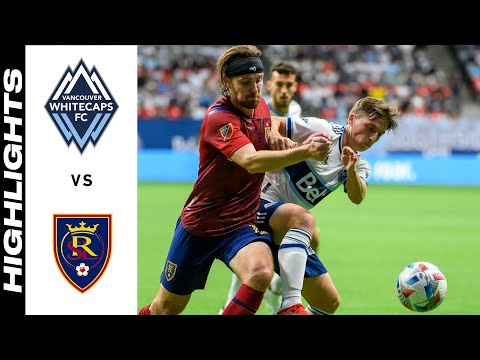 SANDY — In its first match since Freddy Juarez left the club, Real Salt Lake did something it hasn't done all year.

Not in a good way, either.

Ryan Gauld had a goal and an assist, and the Vancouver Whitecaps handed Real Salt Lake its worst loss of the season 4-1 Sunday night at BC Place in Vancouver, British Columbia.

Anderson Julio pulled one back for Real Salt Lake (7-8-6, 27 points), finishing a putback goal for the visitors in the final minute of regulation to prevent the shutout.

RSL was playing without MLS All-Star midfielder Damir Kreilach, who played in the league's showcase event against Liga MX on Wednesday in Los Angeles. It was also without two goalkeepers in David Ochoa and Zac MacMath, and we're forced to play third-string keeper Andrew Putna.

That meant that Jeff Dewsnup, the 17-year-old Herriman native who signed with Real Monarchs a year ago, made his first appearance with the RSL first team on the bench.

But the loss didn't come from Putna or a lack of Ochoa or MacMath, or even with Kreilach still recovering from his midweek game. There were problems "pretty much everywhere," RSL captain Albert Rusnak told reporters after the match.

And there's a pattern with Salt Lake's poor defending that is developing: set pieces.

"We shot ourselves in the foot. It's not the first time this season. It's our worst game in 2021."

No excuses, Rusnak said — even the one involving Juarez's departure announced Friday morning, with the team boarding a flight to Canada's western-most province under the charge of interim coach Pablo Mastroeni.

"This happens. Injuries happen. Suspensions happen," Rusnak said. "The next man who is coming to play has to be ready. I don't think this game was to blame on individuals; I think this was a collective bad performance. A loss at this stage in the season, every game is crucial. It's a frustrating loss.

"It happened so quickly that I'm not sure how it affected us," Rusnak added when asked specifically about Juarez. "We're not going to sit here with excuses, that because Freddy got fired we lost. That's not the case at all."

RSL, which was shutout for the fifth time this season, conceded four goals for the first time since a 4-0 loss to Minnesota United on Sept. 6, 2020.

Mastroeni took his fair share of accountability for the loss but also mentioned set pieces as a glaring weakness in RSL's defense strategy. There was more to it, as well.

"I just felt like we didn't have the right mentality," Mastroeni said. "They were the first to most balls and picked up all the loose balls. There were two of the weirdest goals I've seen conceded in a long time. Given them and the experience of the players this week, it wasn't easy."

When the club returns to Salt Lake, expect a change in defending, including the team's use of zonal marking in defending set pieces, specifically.

"We were looking to change it up, but given that we had no time, I felt that it was best to stay with what we had versus having doubt in having a hybrid," Mastroeni explained. "But it would be silly to be married to something that isn't working. That's definitely a focus moving forward."

With the win, Vancouver stretched its unbeaten streak to nine consecutive matches in a match between two interim managers.

The Whitecaps were led by Vanni Sartini, the club's former director of methodology who replaced Marc Dos Santos for the first time on the bench after the latter was unceremoniously fired in the midst of their current run in MLS play — and following a 4-3 loss to lower-division Pacific FC in the Canadian Championship preliminary round.

Javain Brown finished a corner kick inside the far post to give Vancouver (6-7-8, 26 points) an early advantage, redirecting a cross that deflected off Marcelo Silva in the 33rd minute for a 1-0 lead.

Vancouver maintained 58.6% of possession in the first half but only lofted five shots up to RSL's four en route to the 1-0 edge at the break.

That included a chippy finish to the half when Vancouver interim head coach Vanni Sartini ordered the players to form a tunnel and escort RSL players into the halftime locker room amid a small fracas.

"I don't know what is going on," RSL center back Justen Glad said during a halftime hit on the club's home broadcast. "It's shocking. That's all I'm going to say."

Vancouver doubled the advantage in the 53rd minute on a counter-attacking cross down the Whitecaps' right flank. Putna made the initial save on the cross on frame but spilled it to Brian White for the close-range outback with just one touch.

Gauld made it 3-0 a few moments later — just four minutes after Mastroeni's first substitute as RSL interim manager — with a header from Brown in the 64th minute. The occasion marked just the second time all year Salt Lake has conceded three goals, and the first since a 3-2 loss at Portland on Aug. 7.

Florian Jungwirth made it worse, scoring his sixth career MLS goal to make it 4-0 in the 69th minute off of — you guessed it — a corner kick from Gauld.

Juarez's departure undoubtedly affected the club, even if no one would fully admit to it. But the former head coach's decision to resign from RSL and reportedly take a job as an assistant coach with the Seattle Sounders, according to The Athletic, undoubtedly threw the club through a loop.

"It's been one of the craziest weeks I've experienced, and they haven't seen too many like this, as well," Mastroeni said. "It's really about getting back to where we were prior to this, and that's training the right way, having the right mentality, and finding a solution to what is now an issue with our set pieces.

"We're not giving ourselves much chance to get into games when we're taking such soft goals."

RSL general manager Elliot Fall unequivocally stated that Juarez was not fired from his position. Regardless, there's a shakeup in the ranks — and those are never easy, especially for a figure who has been with the organization for as long as Juarez, a former director of the RSL-Arizona Academy and inaugural head coach of the second-division Real Monarchs.

"I think Freddy's body of work speaks for itself," Fall said. "His impact on this club is immense, and it will be felt for a long, long time. It was tough, it was emotional — but I'm happy for Freddy. He's a great guy, and a very talented coach."

RSL color analyst Brian Dunseth reported during Sunday's broadcast that he has been contacted by seven contacts representing "foreign managers" to submit forms to be considered for the next full-time head coach. The interview process for at least some of those prospects will begin next week, he said.

Real Salt Lake returns to Rio Tinto Stadium on Saturday, when it will host FC Dallas. Kickoff is scheduled for 6 p.m. MT on KMYU.