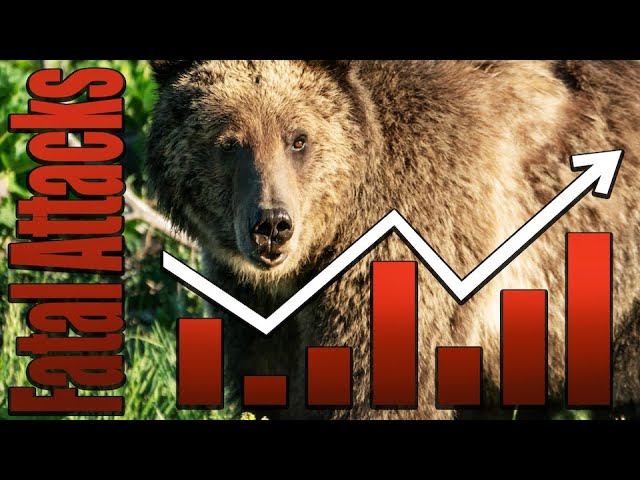 Decoding cause of record number of bear attacks in North America

SALT LAKE CITY — The news cycle over the past couple of years has been relentless and exhausting, and the last thing anyone wants to add to the mix is bear attacks.

Yet, as it turns out, bear attacks — both fatal and nonfatal — aren't just on the rise but have occurred in record-setting numbers from 2020 through 2021.

A typical year in North America will see roughly 11 bear attacks, according to statistics published by nature.com; however, in 2020 there were seven attacks in Greater Yellowstone prior to July 1, according to figures from Interagency Grizzly Study team numbers reported by Jackson Hole News and Guide.

Within the first eight months of 2021, there have already been six fatal attacks in North America — more than double the yearly average. Historically, the majority of bear attacks occur in the latter half of the year, typically peaking during the fall hunting season. If this trend continues and there is even one more fatal attack, 2021 will overtake 2005 as the deadliest year in recent history relating to bear attacks.

So what's going on? Have the Arkoudaphobes — those with an elevated fear of bears — been right all along? No, at least according to bear experts and the decades of data.

According to the 2019 Interagency Grizzly Report, which cited thousands of documented encounters between people and bears, grizzly bears are a great deal more tolerant of people than many might have guessed. More than that, wildlife biologists have learned that bears are far more predictable than previously thought.

That makes understanding bear behavior the key to bear safety. Most bears will avoid people if given the chance, according to the National Park Service. But under certain circumstances, bears may not have the opportunity to avoid humans or may choose not to do so.

This video analyses many of this year's attacks and viral conflicts with bears and examines four factors that explain the record number of bear attacks of the past couple of years. While the COVID-19 pandemic and the resulting boom in outdoor tourism has contributed heavily to the elevated number of attacks, bear attacks have been gradually increasing for close to a decade now.

The data suggests that even in a year of a record-setting number of bear attacks, your odds of being the victim of an attack are remote in the extreme, particularly if you know how to behave responsibly while recreating on lands occupied by bears. So, as park visitation continues to skyrocket, the average number of bear attacks in Yellowstone National Park has remained consistent since the 1980s, averaging one attack per year according to the park's lead bear biologist, Kerry Gunther.

In truth, while often one of the first concerns expressed by those with apprehension toward recreating in the great outdoors, an animal attack is statistically the most unlikely cause of injury and death according to casualty reports published by the National Park Service.

However, this does not negate the importance of being bear aware. The key to safely enjoying the outdoors is education and personal responsibility. People recreating outdoors should seek out quality information from reliable sources and arm themselves with the knowledge needed to recreate safely and responsibly.

While a social fixation on bear attacks has very much led to a disproportionate fear of these powerful creatures, it is nonetheless important to study these encounters. Doing so can unlock an understanding of bear behavior and is critical to preventing similar tragedies in the future.

Remember the old adage, "We fear things in proportion to our ignorance of them."

Or "Knowledge is power."