SALT LAKE CITY — Utah Gov. Spencer Cox, a Republican who has received national attention for his calls for political civility, had a message Thursday for conservatives lawmakers across the nation: They might have something to learn from Utah.

The state's "secret sauce," Cox said, is what "we affectionately refer to as the 'Utah way,'" or "our ability to work together" on divisive issues.

"I'm deeply worried about the polarization that is happening in our country as we continue to become more and more divided," Cox said to a crowd of about 1,500 legislators gathered in the ballroom of the Grand America Hotel in Salt Lake City for the American Legislative Exchange Council's annual conference.

Thursday marked the second day of the three-day, pro-federalism, pro-limited government event featuring dozens of workshops for lawmakers on national, state and local issues. In front of the same crowd the day before, Florida Gov. Ron DeSantis, a potential Republican presidential candidate, struck a different tone as he slammed the Centers for Disease Control and Prevention for its updated mask guidelines and vowed to fight possible future federal restrictions.

Cox, during his speech, had to raise his voice to be heard over the rumble of the crowd as they settled in for their lunch, many chatting to one another throughout the governor's speech. In an attempt to manage the noise, several staff members roamed between the tables with their index finger held up to their lips.

Despite what appeared to be only a partially-attentive crowd, Cox powered through his speech, urging more conservatives throughout the nation to adopt the "Utah way."

As a conservative governor, I feel strongly that we need to do more to bring people into our party, not to define them out of our party.

Even though Utah is a conservative state with a Republican-controlled supermajority in both the House and Senate, Cox said, "we've tried to bring people together who disagree with us, people who see the world very differently than us."

"We don't need other voices," Cox said. "We can do our thing, and we can pass our laws, and we can just make it happen. But that's not the best of us. We found that we can have better solutions, that we can bring people along, people who are marginalized, people who feel like they don't have a voice. We don't have to do it, but we do it because it leads to better policy."

Utah, Cox said, has a "legislature that understands that."

As an example, Cox pointed to a 2015 compromise between the Utah Legislature, the LGBTQ community, and The Church of Jesus Christ of Latter-day Saints. The resulting legislation, SB296, sought to balance nondiscrimination protections to lesbian, gay bisexual and transgender Utahns and religious freedom protections.

The bill added sexual orientation and gender identity to Utah's anti-discrimination laws for housing and employment, while also clarifying exemptions for religious institutions and providing protections for religious expression. The Utah Legislature soon passed the bill into law, and it became model legislation across the country.

"When the rest of the nation was being divided by the issue of freedom of worship and the issue of protecting our LGBTQ community ... here in Utah we thought, 'There has to be a better way,'" Cox said. "And we found that better way by coming together and collaborating."

Since then, Cox said the "Utah way" has been applied to other controversial issues, including medical marijuana, immigration reform, and criminal justice reform.

At the beginning of his speech, Cox briefly highlighted Utah's economic success, including its 2.7% unemployment rate and how the state has been recognized by groups including the American Legislative Exchange Council as having the best economy in the country. 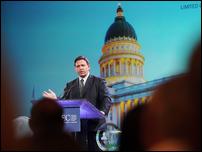 No masks. No mandates. Did Florida Gov. Ron DeSantis sound like a presidential candidate in his Utah speech?

That, Cox said, is what Republicans need to do for their party's survival.

"More importantly, we broadened our tent," Cox said. "As a conservative governor, I feel strongly that we need to do more to bring people into our party, not to define them out of our party."

Cox also took some time out of his speech to back limited government ideals — saying the founders of Utah and the nation understood that government "was never designed" to solve all problems. He pointed to Utah's part-time legislature, which is only in general session 45 days out of the year.

But to keep government small, Cox said it's up to individuals.

"Unfortunately we have an epidemic of loneliness in this nation," Cox added, "and it's leading to depths of despair. We're seeing suicide rates skyrocket. We're seeing people that are addicted to opioids."

"It is incumbent on you, on all of us as leaders in our communities to step up," he said. "Not just in our legislative service ... but in our neighbor's service. We have to know who our neighbors are. We have to care about them. Even if — especially if — they see the world differently than us."

Only then, Cox said, "will our cause grow, and will we be able to reduce government and continue to restore America into the greatness that it deserves."