A woman walks past the logo for Google at the China International Import Expo in Shanghai on Monday, Nov. 5, 2018. (Ng Han Guan, Associated Press)

SALT LAKE CITY — In a political landscape that continues to roil with partisan bickering and hostility in Utah and across the country, finding even a small plot of common real estate is an increasingly remote prospect.

But a new Pew Research survey found the reddest Republicans and bluest Democrats share a boogeyman they would all like to see reined in.

And that's a meme that hasn't been missed by elected officials on both sides of the aisle who are engaged, at the highest level ever, in efforts to address perceived issues with the conduct of U.S tech companies through a torrent of regulatory, legislative and legal efforts.

Utah is playing an outsized role in a few of those proceedings, including a handful of federal lawsuits that have put some of the biggest tech platforms in the crosshairs.

Earlier this month, Utah Attorney General Sean Reyes announced his office is co-leading a new lawsuit targeting Google and its alleged anti-competitive practices in how the company runs its Play Store, the No. 1 app distributor for phones that operate on another Google product, the Android operating system.

The action marks the third multistate suit that includes Utah among plaintiffs attempting to take U.S. Big Tech companies to task for alleged abuses of market dominance. The other filings are against Facebook, and another Google suit that is focused on the company's search functions. While a federal judge dismissed the complaint against Facebook last month, the case is still alive and could resume if an amended complaint is filed. Reyes wasn't able to cite the costs, so far, of the various lawsuits but said it was likely in the "hundreds of thousands" of dollars.

Reyes said Google is gouging consumers and small businesses by charging unfair commissions, in some cases up to 30%, on things like in-app purchases and upgrades for popular games.

"Google is using its hyper-dominant market position to unlawfully leverage billions of added dollars from small companies and consumers," Reyes said in a press briefing. "We believe these are monopolist actions that need to be addressed immediately." 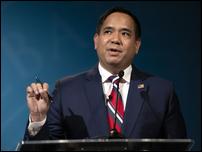 There's a new Google lawsuit targeting Play Store practices, and Utah is at the front of it

Utah Attorney General Sean Reyes announced his office will co-lead a new lawsuit targeting Google and its alleged anticompetitive practices in how the company runs its Play Store, the No. 1 app distributor for phones that operate on another Google product, the Android operating system.

Reyes said his office has heard numerous complaints from Utah consumers, Utah businesses and businesses outside the state about the impacts of Google's fees, which he said far exceed the more market-appropriate commission rates of 2%-3% charged by other, but smaller, app distributors. He also called out the company for manipulating the Android system to perform poorly when running programs sold outside Google Play, also sometimes referred to as the Play Store, compelling developers to play by Google's rules.

Google says the allegations are misguided and that Google Play operates in a way that is more open than competitors and chooses not to "impose the same restrictions as other mobile operating systems do."

In blog post published on July 7, the day the new lawsuit was filed, Wilson White, Google's senior director of public policy, wrote that Google Play operates in an environment that is rife with competitors, including some like Apple's App Store that outpaces it when it comes to revenues.

"So it's strange that a group of state attorneys general chose to file a lawsuit attacking a system that provides more openness and choice than others," White wrote. "This complaint mimics a similarly meritless lawsuit filed by the large app developer Epic Games, which has benefitted from Android's openness by distributing its Fortnite app outside of Google Play."

It's worth noting that since this blog entry posted, Epic Games' federal lawsuit against Google has been joined with the action Utah is co-leading.

A closer look at the overall app seller market, Czerniawski said, reflects that some of the claims in the filing, including outsized commission rates, simply don't hold up.

"The 30% commission, despite AG Reyes' claim, is not anti-competitive," Czerniawski said in a statement. "It is in fact within the perfectly normal range for what you would expect from a store. Whether you look at Valve's Steam Store, Sony's Playstation Store, Microsoft's store for Xbox (even their pc Windows store up until recently), Amazon, and Samsung's Galaxy store, the commission rates are all in that 20%-30% range.

"It is also worth noting that Google, Apple and Microsoft all announced some form of commission rate policy adjustments. This is putting downward pressure on that 30% commission rate and it would not be surprising if that top-level rate declines in the future."

Czerniawski also noted Reyes and his co-plaintiffs shouldn't be so quick to discount the legal reasoning behind the federal court's dismissal of the complaint against Facebook.

"While Attorney General Reyes is correct in his determination that the outcome of the FTC and States versus Facebook does not necessarily have a direct impact on his pending litigation in this case or others, as those cases are looking at different questions, he is not necessarily in the clear either," Czerniawski said. "The FTC lost to Facebook in part because the federal judge correctly identified that the FTC and state AGs failed to demonstrate actual evidence that was legally sufficient to justify their complaint of antitrust violations.

Google is using its hyper-dominant market position to unlawfully leverage billions of added dollars from small companies and consumers.

"The reason that matters for this litigation and the other pending litigation is that Attorney General Reyes and others will have to do a far better job of demonstrating harm to consumers if they want these cases to be taken seriously by a court of law."

Czerniawski said he was keeping a rough tally of federal legislative activity focused on the conduct of U.S. tech platforms and noted dozens of proposals currently focused on either rules that govern social media management, like Section 230 of the Communications Decency Act of 1996, or changes to standing federal antitrust regulations.

While data gathered in the new Pew report focused on the sentiments of respondents when it comes to social media platforms, it provides further evidence that consumers, regardless of political affiliation, are mostly harboring bad feelings about the conduct of Big Tech companies.

In a survey conducted in late June that included responses from over 4,700 U.S. adults, Pew found Americans mostly suspicious when it comes to how big tech companies operate.

"A majority of Americans think social media companies have too much power and influence in politics, and roughly half think major technology companies should be regulated more than they are now," the report reads, which comes as four major tech executives prepare to testify before Congress about their firms' role in the economy and society.

While the majority of both Republicans and Democrats in the survey registered qualms about social media platforms, Pew's data also reflects some differences between party members.

Utah-specific polling done in February of this year also found wide skepticism about tech firms, and a similar partisan difference with Beehive State Republicans more cynical than their Democrat neighbors.

For its part in the latest legal activity, Google says the vast majority of app sellers pay no commission at all and points its corporate finger at big developers as the fount from which the grievances are flowing.

"This lawsuit isn't about helping the little guy or protecting consumers," White wrote in his blog post responding to the Google Play lawsuit. "It's about boosting a handful of major app developers who want the benefits of Google Play without paying for it.

"Doing so risks raising costs for small developers, impeding their ability to innovate and compete, and making apps across the Android ecosystem less secure for consumers."