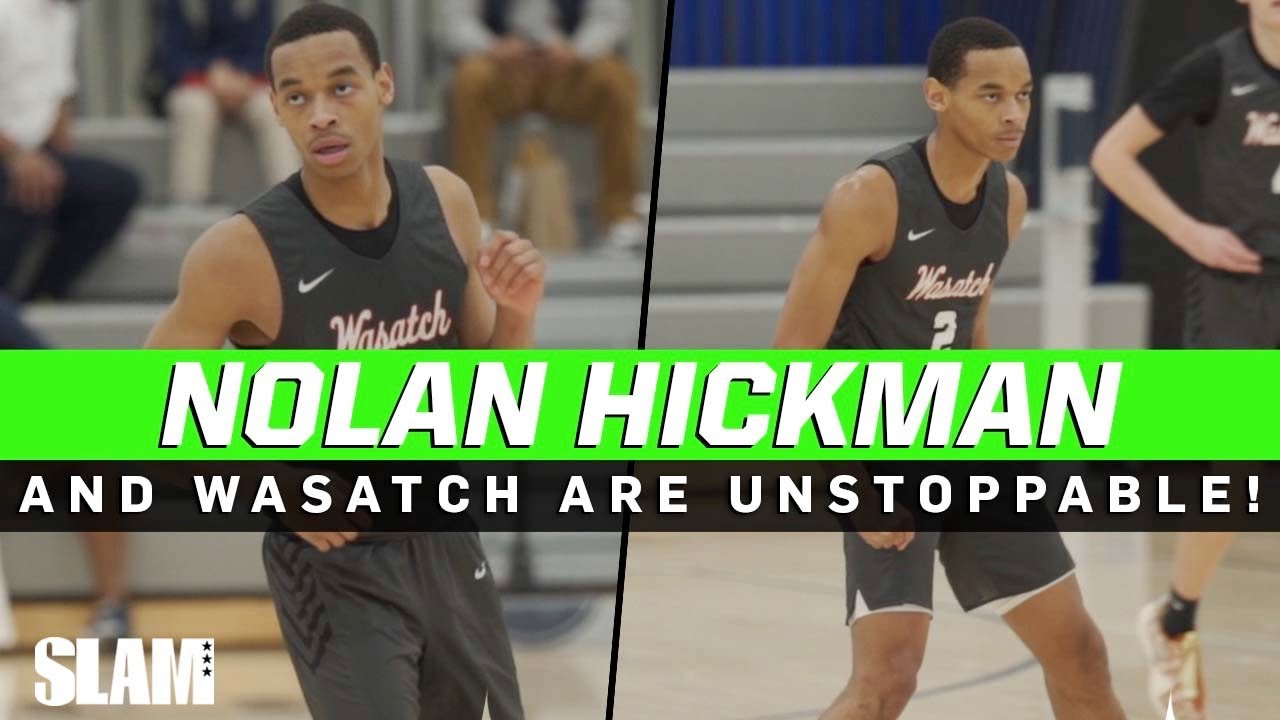 Wasatch Academy vs Hamilton Heights GOES DOWN! Nolan Hickman and the Tigers were looking UNSTOPPABLE

MOUNT PLEASANT, Sanpete County — In a state filled with basketball talent, Wasatch Academy has often stood on its own.

An independent member of the Utah High School Activities Association that eschews state championships to play a national schedule and compete for a national title, the Tigers assemble a star-studded lineup every year that competes among some of the top prep schools in the country and will begin play in the nationally acclaimed National Interscholastic Basketball Conference next season.

But even among a lineup that featured Houston signee Robbie Armbrester, future BYU big man Fousseyni Traore, and five-star point guard Richard "Pop" Isaacs, Jr., Nolan Hickman stood out in his ability to alter a game as a shooter, defender and distributor.

Now, he'll stand out as the best player in the state by one of the leading organization's recognizing high school athletics.

"When kids come here, they usually sacrifice state championships for the team and to prepare for their future," Wasatch Academy coach Paul Peterson said. "It's awesome that Nolan could make that sacrifice — and still won that Gatorade player of the year.

"He was awesome, both on and off the court. We sit back and look at the season, and I'm not sure what we would've done without Nolan. He always rose to the occasion for the big games. It was amazing, some of the things that he did. What would we have done without him? I don't think the same things would've happened for the team."

The 6-foot-3, 195-pound guard bound for Gonzaga is the first Gatorade Utah player of the year from Wasatch Academy in the century-old boarding school's history, the association announced Friday. Hickman, who hails from the Seattle area but transferred to Wasatch Academy when the state of Washington altered play due to the COVID-19 pandemic, averaged 16.0 points, 5.4 assists, 3.9 rebounds and 1.7 steals per game in leading the Tigers to an 18-7 record played primarily against a national schedule.

The first McDonald's All-American in school history, Hickman is ranked as the No. 20 prospect in the Class of 2021 by Rivals and a four-star point guard by 247 Sports who chose the Zags over Oklahoma, Arizona and Kentucky, where had previously signed to play college hoops before requesting out of his national letter of intent when the Wildcats signed a five-star point guard after signing day.

Instead, Hickman is projected as a potential starter for Mark Few's Zags next fall — and he'll step on campus as the nationally recognized best player from the state of Utah after leading the Tigers to a berth in the GEICO national high school invitational.

"Hickman is a true combination guard who is a leader by example," ESPN national recruiting director Paul Biancardi said in a news release. "He's a versatile scorer with the passing instincts to deliver wins. A mature, high-level competitor who is also a great teammate, he exhibits positive body language all game long."

In addition to his run on the basketball court, Hickman maintained a 3.22 GPA at Wasatch Academy and helped launch the GiveBack Foundation during the pandemic, where he gathered winter clothes for the less fortunate and held virtual basketball camps for underprivileged youth around the country.

"He's already helped bring players to our program, and he'll help bring others to our program with this award," Peterson said. "But mostly, he's been an incredible friend to each of his teammates off the court. He's had a positive influence on everyone in our program.

"I think he touched all of these guys' lives, even more than on the basketball side. Without Nolan, there's no Casey Jones. Maybe there's no Fouss Traore, as we know him. He brought out the best in me as a coach; if my best player wasn't as coachable as Nolan, who knows where I would be? And then, what is the program like?"

Hickman follows previous Gatorade Utah boys basketball players of the year like Dallin Hall, the former Fremont High star bound for BYU who won the award in 2019-20; Rylan Jones, the two-time award winner from Olympus who spent two seasons at Utah before most recently transferring to Utah State; and Jaxon Brenchley, who won the award at Ridgeline in 2016-17 and will be a junior at Utah this fall.

Hickman joins fellow Gatorade Utah basketball player of the year Emma Calvert, the Fremont High star who won two state titles in four years, averaged 17.3 points, 7.4 rebounds, 1.9 blocks and 1.8 steals per game as a senior, and maintained a 3.99 GPA before signing with BYU in the fall.