SALT LAKE CITY – Utah's Republican senators were on opposite sides of a failed vote Friday to advance a bill to create a bipartisan commission to investigate the deadly Jan. 6 attack on the U.S. Capitol.

Sen. Mitt Romney voted in favor of beginning debate on the legislation, while Sen. Mike Lee voted against it.

Romney was among six Republicans to side with the Democrats in a vote that fell short of the 60 votes needed to move the bill forward. The final count was 54-35, with 11 senators not casting a vote, including nine Republicans.

"We must prevent what happened on Jan. 6 from ever happening again, and I voted in support of a commission to evaluate the failures that occurred that day and seek out corrective action," Romney said in a statement.

He said Sen. Susan Collins, R-Maine, was working on additional measures to ensure the commission is truly bipartisan, and that he had hoped she would have an opportunity to include those assurances in the final legislation.

"It's unfortunate that the Senate was not able to agree to move forward with an honest, credible and thorough investigation into the attack on our democracy," Romney said.

Lee said the events of Jan. 6 were tragic, and there are many legitimate questions that remain to be answered.

"However, the commission the Democrats attempted to establish today contained broad investigative mandates even to areas outside the events of Jan. 6th, combined with broad subpoena power and a flawed structure, constituting a recipe for a political witch hunt," he said in a statement.

Lee said he supports efforts, including multiple investigations already underway and oversight from Senate committees, to uncover those unanswered questions, "but establishing a Kangaroo Commission to politicize the events of that day will neither help us deliver justice nor get to the bottom of the truth."

Senate Majority Leader Chuck Schumer, D-N.Y., said a bipartisan panel is "desperately" needed as former President Donald Trump continues to push the "big lie" that the election was fixed and he is rightfully president. 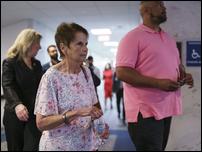 Utah Sen. Mitt Romney met with the mother of Capitol Police officer Brian Sicknick, who died following the Jan. 6 insurrection at the U.S. Capitol, before an expected vote Thursday on a commission to investigate the attack.

"This is right down the middle," Schumer said. "If our Republican friends voted against this, I would ask them, 'What are you afraid of? The truth? Are you afraid that Donald Trump's big lie will be dispelled?'"

The bill would create a 10-member commission evenly divided between members selected by Democratic and Republican leaders. Both sides would have equal subpoena power. The panel would be tasked with issuing a report with its findings about the Jan. 6 attack by the end of the year.

Romney blamed Trump's "selfish pride" for the attack when Congress reconvened after rioters forced them to flee the building that night. Romney was one of seven Republicans who voted to convict Trump of inciting an insurrection.

Lee said after Trump's February impeachment trial that he does not condone the Jan. 6 violence or Trump's words, action or omissions that day. But, he said, the word "incitement" has a specific meaning in the law, and Trump's words and actions fell short of that standard.

Senate Minority Leader Mitch McConnell, R-Ky., who called the commission proposal "extraneous," strongly urged Republican senators to vote against the House-passed bill. The vote was delayed through the night by a handful of Senate Republicans who obstructed China competitiveness legislation, though Democrats decided to punt that bill until after the Memorial Day recess week in order to push forward on the commission bill, according to Politico.

In addition to Romney, Republican senators voting for the bill were Collins, Bill Cassidy, of Louisiana; Rob Portman, of Ohio; Lisa Murkowski, of Alaska; and Ben Sasse of Nebraska.

Several undecided Republicans came down against advancing the commission ahead of Friday's procedural vote, despite Collins' attempt to broker a compromise and last-minute lobbying by the family Capitol Police officer Brian Sicknick, who died after the insurrection.

Gladys Sicknick, Sandra Garza, who was Sicknick's longtime partner, and two police officers who faced the mob that day, shuttled between Republican Senate offices to urge them to support the commission.

"You know, usually I'm staying in the background and I just couldn't, I couldn't stay quiet anymore," she told reporters after meeting with Romney.

Romney said Thursday he appreciated the opportunity to meet Sicknick's loved ones and officers from Capitol Police and the Metropolitan Police Department.

"They shared with me the grief, shock and physical trauma they experienced as a result of January 6th. No law enforcement officer should have to confront the violence that occurred that day, especially not on our democracy's most sacred ground," he said in a statement to the Deseret News. "I remain deeply grateful for the incredible bravery and sacrifice of our law enforcement personnel who protected the lives of those of us inside the Capitol."

The House passed legislation last week to form the commission to investigate the Capitol attack.

Republican Utah Reps. John Curtis and Blake Moore voted for the bill, while Reps. Chris Stewart and Burgess Owens voted against it.