SALT LAKE CITY — Utah Sen. Mike Lee received a memorandum from former President Donald Trump's legal team on the weekend before Congress met to finalize the presidential election suggesting that seven states had decided to or had submitted a different slate of electors than the ones they sent to Washington in December.

Presumably, those states were switching their votes for Democrat Joe Biden to Trump.

"I found this surprising because I knew that hadn't happened. I continued to hear that it would happen," Lee said during an online town hall Wednesday night.

The Republican senator's comments reveal some of the tactics Trump used in a failed attempt to swing the outcome of the Nov. 3 election his way.

Lee also weighed in on the impending trial in the Senate, which he believes is unconstitutional now that Trump is out of office.

Trump falsely claimed the election was stolen from him and urged his supporters to march on the U.S. Capitol. He pressured former Vice President Mike Pence, who oversaw the counting of electoral votes, to overturn the results and pressed state officials to find him more votes.

Lee, who advised Trump on his legal challenges to the election results, said Trump's inner circle repeatedly told him that state legislatures were acting to decertify or even recertify their slates of electoral votes before Congress convened on Jan. 6.

"As we got closer and closer to Jan. 6, I became concerned because I wasn't seeing any of these developments occur but I was continuing to hear this narrative," he said, adding it would have obviously made news if it were happening.

After receiving the weekend memo, Lee said he wanted to "get to the bottom of it" and started calling state officials in Georgia, Pennsylvania, Wisconsin, Michigan and Arizona, all swing states that Trump lost. 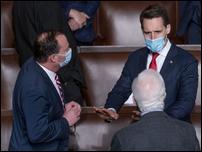 How President Trump misdialed Utah Sen. Mike Lee while the Capitol was under siege

With a mob of election protesters laying siege to the U.S. Capitol, Sen. Mike Lee had just ended a prayer with some of his colleagues in the Senate chamber when his cellphone rang.

Lee said he found in conversations with governors, attorneys general, secretaries of state and legislative leaders in those states that not one was willing or inclined to decertify or recertify their electoral votes.

"At that point, I believed that we had reached the end of the process as indeed we had," he said.

Still, Lee said he was further surprised when Trump's inner circle continued to argue that Congress could and would change the outcome of the election.

The senator said he had previously explained to Trump, his White House staff, his campaign team and his lawyers that Congress' only role is to count the votes unless a state had submitted conflicting slates of electoral votes.

And although that has happened in the past, it did not happen in 2020. Each state's electoral votes came in for either Biden or Trump. There were no dueling slates.

"This happens infrequently, fortunately. It would be a really big mess if it were to happen. It has been a big mess at times in the past," Lee said.

In 1960, Hawaii initially submitted its electoral votes for Richard Nixon but later in the day submitted a second slate for John F. Kennedy. Congress, Lee said, had to figure out which one was official.

Lee did not join Republicans in Congress who objected to the electoral votes in some states that Trump lost.

"I've taken enormous heat from my own political party for doing that," he said.

The Constitution makes it clear that only states are charged with appointing presidential electors, Lee said. The 12th Amendment, he said, calls for the vice president to open the ballots and count the votes, nothing more.

"Had there been greater understanding and appreciation on the part of all involved for what Congress' role was and what it was not, I think we could have avoided some of the emotions that led to the violence that day," Lee said.

Not matter how fairly or unfairly or how well or poorly a state's election laws may have been carried out or designed, Biden is the legitimate winner, said Lee, who campaigned for Trump. Though he said he would rather have Trump in office than Biden, "make no mistake he is the president of the United States."

"There is no contest between any loyalty I have to a party or to a person that compares to the oath I took to the Constitution. I will never betray that," he said.

As for the Senate impeachment trial, Lee said he believes it is unconstitutional because Trump is no longer president. The House impeached Trump a week before he exited the White House for inciting an insurrection at the Capitol that left five people dead.

The House delivered the article of impeachment to the Senate on Monday. The trial is expected to start in February. If convicted, Trump could be barred from running for federal office again.

"Had they delivered them sooner, it would be a different question. They didn't bother to deliver them until nearly a week after President Trump had left office," Lee said. "Had they done so earlier, then the Senate, by reading of the Constitution, would have had jurisdiction to conduct an impeachment trial."

To interpret it otherwise, Lee said, would lead to an "interminable succession" of articles of impeachment to settle past political scores against people who previously served and are widely thought to have aspirations for future federal office.