SALT LAKE CITY — Consumers in Utah and across the country didn't need to see the latest federal data to know they've been spending more on day-to-day items, as well as those infrequent big-ticket purchases, in the past few months.

But the level of hardship created by sharply rising prices on goods and services varies widely depending on how old you are, how much money you make and what your family looks like.

The size of the increase in the April U.S. Consumer Price Index, some 4.2% over the same month last year and the largest year-over-year jump in more than a decade, has stirred dialogue and debate among market watchers and policymakers.

The question? Is the change signaling the beginning of an inflationary period that requires a prompt response from the Federal Reserve, or is it a temporary blip that was expected as COVID-19 vaccination rates continue to rise and pent-up consumer demand is released.

As the debate continues over whether current inflation is a trend or transition, consumers are shelling out more now on the things they need and want, and particularly so in a few categories that saw double-digit increases.

Western U.S. states saw overall costs related to transportation jump 14% over last year, but within that category are some bigger numbers, including the price of a used car or truck up more than 21% since April 2020 (and 11% of that increase happening since March numbers were released). New vehicle prices rose by more than 9% since 2020, and the unleaded fuel to power those vehicles, which typically experiences a seasonal rise about this time of year, will cost you on average 38% more than in April 2020.

General food prices rose 3.4% over last year with the cost of fresh food like meat, eggs and milk up almost 5% since April 2020. Household energy costs rose by almost 8%, but housing costs themselves saw a modest 2.2% bump. 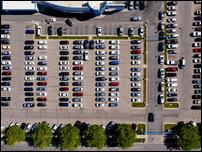 Looking for a new ride? Finding a used vehicle in today's pandemic-impacted car market is harder to do and more expensive.

Medical care was also more resilient to current conditions and has only seen a 1.6% increase in the past year. Who is feeling the pain?

While the data from the U.S. Bureau of Labor Statistics provides a look at average price increases across the board, parsing impacts by who you are and what kind of life you're living moves the number around.

A Wall Street Journal analysis that merged federal data with work done by researchers at Harvard Business School revealed we're not all feeling the same level of pain when it comes to inflationary pressures.

Young U.S. adults, who tend to travel and eat out more than older residents and who have ongoing costs as current or newly graduated college students, collectively saw a 4.5% rise in their cost of living. Older Americans whose medical costs represent a bigger percentage of household budgets experienced average inflation of 3.3% over last year. And families with children under 5 years old, who eat at home more and spend a little less on travel and recreation, are navigating average cost-of-living increases of 3.1%.

It's worth noting that all of the year-over-year numbers from the bureau of labor measure current costs of goods and services against where they were at in April 2020, in the trough of the economic impacts of COVID-19.

Harvard Business School professor Albert Cavallo notes that while consumer demand is surging as a bigger percentage of the U.S. population completes vaccination cycles, the pandemic impacts to the supply chains that support the goods we buy are recovering at a slower rate.

Report: Number of business deals in Utah down during pandemic, but value hit new record of $26B

Even though there were fewer deals made in Utah overall in 2020, the value of those deals reached a new high of $26.4 billion, beating out 2019's $25 billion, according to a new report.

"As soon as vaccinations started, I thought (there'd be) faster recovery in some of the supply disruptions," Cavallo told the Harvard Gazette last week. "I expect now, based on the research we have done, that they will continue having an impact for at least one quarter more or even longer. I do expect them to eventually dissipate or improve toward the end of the year." Interest rates

Phil Dean, public finance research fellow with the University of Utah's Kem C. Gardner Policy Institute, said the big year-over-year jump in consumer prices this April was likely not cause for deep concern. He said the Federal Reserve Board is continuing to keep interest rates at historic lows and is shooting for an inflation rate of around 2% to balance various economic factors, including keeping consumer prices in check while incentivizing business investments that build employment rolls. But he said the agency is facing an unprecedented set of factors to interpret and navigate thanks to the impacts of, and responses to, the COVID-19 pandemic.

"The Fed is looking to keep interest rates for a number of issues," Dean said. "At a national scale ... it's an open question of whether they're going to be able to control it the way they think they can.

"A big wild card in this, understanding all the fiscal stimulus, all this money that has been put out there and how it's impacting all the other pandemic-related economic factors."

Dean also noted Utah's powerhouse economy weathered the economic fallout of COVID-19 better than most of the country, is recovering faster and was bullish on the state's near-term prospects.

And for now, it appears there's continued support for the Federal Reserve to stay the course on interest rate policy.

Earlier this month, U.S. Treasury Secretary Janet Yellen told The Wall Street Journal that she expects any near-term increases in inflation will be temporary. She echoed remarks Fed Chairman Jerome Powell made in late April that the central bank isn't worried about a persistent rise in inflation and that he expects that price increases over the coming months will subside.