SALT LAKE CITY — The Utah Legislature passed a ban on face mask requirements in schools beginning with the next academic year after an emotional debate Wednesday among some who questioned how an end to mask-wearing could impact unvaccinated students, and others who pleaded for the move to improve kids' mental health.

"I know there's been some concerns about local control, and I just want you to know that local control is maintained," Peterson said, explaining that masks can be required by schools in collaboration with local health departments during outbreaks under HB1007.

The bill passed 23-5 in the Senate and 50-24 in the House, largely along party lines, during a special session of the Legislature.

The new bill, he said, is meant to remove that exception and prohibit school districts from ordering masks "on their own," said Vickers, bill co-sponsor.

Sen. Kathleen Riebe, D-Cottonwood Heights, asked for a change to the bill that would allow face covering mandates if a school, class or other school group has a certain percentage of immunocompromised individuals.

Riebe also proposed letting school districts mandate masks if the state's 14-day COVID-19 case rate is greater than 191 per 100,000 people; the statewide seven-day average COVID-19 ICU utilization is more than 15%; and the number of people in the state who have been vaccinated against COVID-19 is less than 70% of the total population.

Those changes did not get approval from the Senate.

Vickers emphasized that schools and teachers can still encourage students to wear masks, but they can't mandate it under the bill.

Sen. Scott Sandall, R-Tremonton, said he's had constituents tell him they'll pull their kids out of school if mask requirements are lifted. He asked if students can still wear masks if they wish.

Vickers said they can.

"This becomes an individual choice now and not a mandated situation, and individuals can choose, which I think is appropriate," Sandall said.

Explaining her reservations about the bill, Riebe contended that those who choose to wear masks sometimes face hostility from others who are against mask-wearing.

Rep. Melissa Garff Ballard, R-North Salt Lake, wearing oxygen tubes in the House chamber as she recovers from COVID-19, criticized the bill as taking away control from local school districts.

"It has been quite an unusual year that we've all had with this COVID-19. Looking back, many in this body have lost family members, but I'm standing to oppose this bill for the simple reason of process and local control. I'm not standing because I had COVID and I was in the hospital for a week and am still on oxygen," Ballard said.

Though she said she's excited to go without a face mask because vaccines are available, she opposes the bill due to the "process this has taken, namely by the sponsor himself."

Although Peterson works in education, Ballard said he did not get feedback from others in schools. While Ballard spoke, Rep. Norm Thurston, R-Provo, attempted to prevent her from finishing her thought, as he claimed it was inappropriate for her to refer to a testimony shared during a legislative committee meeting. 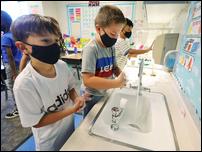 The Utah Legislature is set to tackle whether to ban face mask requirements in schools in a special session on Wednesday.

"It should be down to local control. That's what the principles are that we run on, that we support ... is the power is to the people. And I personally feel it's very hypocritical for this body to ... complain about the governor last year having a face mask mandate, and now we are turning around and requiring a state mandate to not allow the masks without a huge process," Ballard said.

Rep. Phil Lyman, R-Blanding, said that the state needs to return to "what is a direct health threat and the way to manage that."

If someone doesn't pose a direct health threat, he said, they shouldn't have health mandates imposed on them.

Rep. Carol Spackman Moss, D-Holladay, said she fears the bill would set the Legislature up as a "super school board."

"Now we have a body of elected officials who are close to the people, local school boards, who in my view should be able to make a decision for their individual district. You know, the outbreaks have been very different from district to district," Moss said.

Thurston said the bill says school districts shouldn't have power "unilaterally" to make the decision, but will need to work with their local health department and government.

House Minority Assistant Whip Jen Daily-Provost, D-Salt Lake City, pointed out that children under 12 can't get vaccinated and posed a question to Peterson whether children have died from COVID-19.

Looking back, many in this body have lost family members, but I'm standing to oppose this bill for the simple reason of process and local control.

"My concern about this bill is, absent an outbreak and not knowing when children in our state can be vaccinated, and particularly understanding that there is a large number of children in our state who are extremely vulnerable ... to COVID, including death, I don't know that there's a benchmark that anyone would like to set, but to me a single dead child is a child too many," Daily-Provost said.

For example, in a measles outbreak, the school district doesn't shut down schools, but the health department does, he said.

"Nothing in this bill prohibits someone from wearing a mask if they want to," Peterson said, adding that the removal of mask requirements will give students "assurance" as they return to school.

Gov. Spencer Cox announced last week the state would not require masks to be worn in K-12 schools during the final week of classes, although he said local districts could choose to continue the mandate.

The Salt Lake City School District announced Tuesday evening it will leave its mask mandate in place until the end of this school year on June 7.

"We've come too far to let go of proven safety practices like mask wearing with just a few days left in the school year," interim Superintendent Larry Madden said in a statement.

With "very few" students vaccinated so far, he called the risk from the disease "too great, especially when we consider those in our school communities with preexisting health conditions or who have family members at home who are high risk for contracting COVID-19."

"The last thing we want to do is increase the risk in our city just as school is about to let out for the summer," he said.

The bill to end mask mandates in school would prohibit a face-covering requirement "to participate in or attend instruction, activities, or in any other place on the school campus or facilities in the system of public education after the end of the 2020-2021 school year."