NEAR DUGWAY PROVING GROUND, Tooele County – Every Wednesday morning in Utah's West Desert, volunteers armed with rifles have ventured into a herd of wild horses and fire away at the mustangs.

It's not to hurt them. It's to give them a better shot at survival.

"Because I love the horses," said Jessica Franzen explaining her role in what amounts to a long-running science experiment. It's aimed at resolving a decades-old controversy over the future of the picturesque mustangs. "I do love helping out," she said. "There's a huge need."

The volunteers tried to maneuver themselves close enough to get a clean shot at the hindquarters of a wild mare. Instead of using gunpowder and bullets, their rifles used CO2 to fire a dart that packs a chemical punch. Each dart delivered a shot of PZP which makes a mare sterile, temporarily. One booster shot each year keeps her that way.

"It helps the horses by not having the stresses of foaling out every year," said Jan Drake who works with Wild Horses of America. The nonprofit group has provided volunteers who are trained to dart the horses. "It makes them healthier, and it does reduce the population," Drake said.

Population control is an important long-term strategy for those who think there are too many wild horses and burros. About 95,000 of them currently run free on public lands in 10 western states. The sterilization effort is particularly timely this year considering how bad the summer is expected to be for the horses. The deepening megadrought is threatening the mustangs with devastating consequences.

That, at least, was the view of government wranglers working for the U.S. Bureau of Land Management. They developed a controversial plan to round up and capture many of the wild horses and remove them from their historic range near the U.S. Army's Dugway Proving Ground. That plan clashed with the sentiments of many horse lovers for whom the mustangs are the very image of the American West, a bit of living history running free on public land.

The herd that roams the desert near Dugway, known as the Onaqui herd, is almost certainly the most photographed bunch of wild horses in Utah, if not in the country. It's not hard to see why. The Onaquis are easily reached by tourists on back-country roads so the "wild bunch" has become tame. They seem almost born to pose for spectacular pictures.

"They're a beautiful animal, they're fun," said Kaysville tourist Dave Packer as he aimed his camera at the horses. "I think they're an important heritage item in the West. They're part of the ecosystem. So, we need to protect them, but we also need to manage them."

Right now, drought has made life tough, not only for wild horses but for sheep and cattle that compete for the same grass in the harsh desert region.

"I've never seen the range look like this for all the years I've been out here," Drake said.

Many mustang enthusiasts predict it will get worse by late summer.

"It is so dry, there's like hardly any green," Franzen said. "I don't know what the horses are eating out here."

Darting with contraceptives is one strategy to tame a population explosion that began a half-century ago. In 1971 Congress banned the slaughter of mustangs – it was previously done mainly for dog food – and gave wild horses and burros the protection of federal law.

The Bureau of Land Management has periodically used round-ups, known officially as "gathers," to capture excess horses and adopt them out or sell them. That has typically provided homes for fewer than 3,000 horses a year. The vast majority of gathered horses, 54,000 is the current estimate, are cooped up in 28 government corrals and 42 pastures, languishing at taxpayer expense.

Last year the BLM spent $91 million managing wild horses and burros, $57 million of that just to care for the captured ones. It figures out to roughly $50,000 per horse over its lifetime.

"We can dart a mare for about $700 over her lifetime," said Deb Walker of the American Wild Horse Campaign, a horse-protection group that conducts contraceptive darting efforts in Nevada.

Last year 126 mares were darted in the Onaqui herd. The volunteer darting effort seemed especially well-suited to the Onaquis because they allow people to sneak up on them and take a pot-shot. But Walker said the technique has been used successfully on several other herds as well. Overall, throughout the West last year, 735 mares were sterilized, presumably resulting in hundreds of fewer babies.

"I think it's a part of the solution," said Tami Howell, a BLM wild horse and burro specialist. "There's definitely less foals at the same time this year than there were a year ago."

In spite of the apparent success of the fertility control program, the BLM has planned a major 'gather' in July, a project that has upset many horse-lovers. The BLM typically used helicopters to stir up the horses and get them on the run. The chopper pushed the mustangs against fence lines that squeeze them into a trap and then into corrals.

The BLM has planed to round up 400 Onaqui horses. After they're checked for health, and after more are sterilized, the healthiest 100 or so will be returned to the range. Some said the gather is far better for the horses than what the drought will do to them.

"Oh, I guarantee I think some of them will die," Drake said. "If they don't gather, we're going to start seeing horses all over the place out here dead."

Critics claimed the Onaqui horses look healthy so far. If there's a shortage of grasses to eat, they asked, whose interests is the BLM serving by reducing horses but leaving large numbers of private livestock on public land.

"It always stumps me how they can clear the land of the wild horses and then we'll see sheep or cattle out on the very same land," Walker said. "So, it's the livestock interests, mainly." 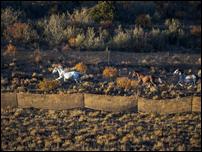 A federal effort to permanently remove 480 wild horses from western Utah also includes a plan to surgically sterilize more than a dozen mares that will be returned to the range.

The BLM has contended that allowing livestock grazing, and collecting grazing fees from ranchers, is an important part of its multipurpose mission.

"I believe that we can have multiple use out here," Howell said, "And that, with appropriate levels, it can sustain the animals."

Even if the number of cows was reduced, the BLM said there would still be too many mustangs.

"Looking at these horses, body condition-wise, compared to Onaqui horses a year ago, they have declined," Howell said. "And there's just not the forage that would sustain the number of horses that we currently have."

It's an argument as old as the protection law itself, and as new as the latest science on climate change: Is it more humane to control the population of horses, and livestock, for the amount of grass nature provides, or is it better to let the long-term mega-drought take its own inhumane toll?

On his photo expedition in the desert, Packer weighed in on the BLM side of the debate.

"I think the gatherings are probably necessary to keep the herds under control," Packer said. "For the herd health itself, they need to do something. And as much as we love the horses, we need to have them managed well also."