MOAB — Like many others, Nicollee Gaddis-Wyatt was dismayed when she learned last week that a beloved ancient petroglyph located on the outskirts of Moab had been defaced.

As the field manager of the Bureau of Land Management's Moab Field Office, Gaddis-Wyatt had worked to ensure that Birthing Rock, otherwise known as "Birthing Scene Petroglyph," as well as thousands of other unique archeological sites were preserved for future generations.

Despite the signage and fencing surrounding the large boulder to discourage vandalism or graffiti, there wasn't enough to stop what happened to it.

Now, as the cleanup of the vandalism begins, Gaddis-Wyatt said she's mostly optimistic about the future of the defaced petroglyph; still, she said the archeological site will still "never be the same," even though parts of the site weren't defaced and people will be able to view the ancient artwork in the future.

"It's just disheartening that folks just don't understand the importance of preserving things," she said, as she searched for the right words to describe the incident.

"It's not OK to go and deface anything on public lands," she added, "... you're erasing the history and the important stories of the indigenous folks that were here before us."

Initial emergency treatment at Birthing Rock happened Wednesday; the graffiti was found at the site April 26, according to BLM officials.

The cleanup involved all of the graffiti within about 20 centimeters of the vandalized petroglyphs, according to Gaddis-Wyatt. It helped make some of the vandalism less noticeable.

"Because they dug into the stone, it's not like it (the vandalism) was erased. It's just kind of obscured," she said, of the work conducted last week. 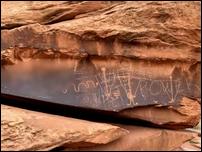 'This is not an accident': Well-known Moab petroglyph vandalized; $10K reward offered in case

Federal officials said they are offering a $10,000 reward for information leading to the arrest and conviction of anyone who was responsible for damaging a famous petroglyph in Grand County.

The crew assigned to the initial cleanup wasn't allowed to touch any of the damage written onto the actual petroglyphs themselves. That will happen once a professional conservator group can be contracted to repair the remaining damage.

Gaddis-Wyatt told KSL.com that the final cleanup phase will happen "as soon as possible," but that could mean weeks up to possibly months.

A big reason why the time frame isn't known for sure is that it takes time to collect a complete damage assessment and then go through the bidding process for a group. Since there are so few groups qualified to handle the type of project, it could also take time to find the right group, and then for the hired group to have time to go out to the site.

Once that work is completed, she said people will still be able to experience the petroglyphs even if the artwork won't be exactly as untouched as it once was. The other good news on that end is that not all of the art was damaged by the recent vandalism.

"I think once we get more of the repair done, the defacing won't be as obvious … so it's definitely going to be enjoyed," she said.

State archeologists said they feared Birthing Rock wouldn't be completely the same after the incident was reported last week. In all, an individual or a group of people went to the petroglyph site, which is located just off of a popular road for recreation, and scribbled in vulgar and racist messaging and imagery across three of the rock's four panels.

The rock features petroglyphs dating back to the Ancestral Puebloan Culture, almost 2,000 years ago. Elizabeth Hora, an archaeologist for the Utah State Historic Preservation Office, told KSL.com last week that it appeared most of the damage was to petroglyphs left by people from the Fremont Culture, which stretched from 500 A.D. to about 1300 A.D.

We're trying to preserve this for future generations. Whether it be the petroglyphs or just our scenery in general, just keeping on trail, cleaning up your litter and packing in and packing out, and just considering others before doing this.

Meanwhile, the petroglyph had been picked to be the literal poster child this year for the Utah State Historic Preservation Office's campaign to combat land vandalism. The vandalism was reported before the agency could place anti-vandalism posters around the state featuring the rock.

"Ultimately, this is a problem of education on our part," Hora said last week. "So we are committed to being good educators and helping people understand why people should protect the past."

Gaddis-Wyatt agreed that education is an important tool — if not the best tool — to preserve places like Birthing Rock. She urged people who head out into the outdoors to follow Leave No Trace principles, which include the easy-to-remember ideology of taking only photos, not mementos, and leaving nothing but footprints from any excursions.

That's especially true for public lands and for the remaining petroglyphs that still remain from the past.

"We're trying to preserve this for future generations," she said. "Whether it be the petroglyphs or just our scenery in general, just keeping on trail, cleaning up your litter and packing in and packing out, and just considering others before doing this. And then also for folks who see things, they should speak up and let us know when they find these incidents so we can take care of it the best we can. … (The BLM is) a small crew. We need the public's help in taking care of public lands, as well."

No updates have been given in regard to the investigation into the vandalism, which is being handled by BLM Law Enforcement. The bureau announced Tuesday that it was offering a $10,000 reward for information in the case.