SALT LAKE CITY — Utah Gov. Spencer Cox told the 1,904 delegates in attendance at the Utah Republican Party's Organizing Convention on Saturday that they need to spend more time volunteering and coming together.

Cox, and Sen. Mitt Romney received boos and obvious disapproval at moments from some in attendance, and Romney survived a censure vote by delegates. But throughout the day the call from them and other Republican leaders was the need to unify the party in both message and behavior to withstand challenges from the left.

They then followed 8 hours of speeches and delegate work with the selection of Carson Jorgensen, 31, a sheep farmer, as the party's new chairman, beating three other candidates, including veteran Stewart Peay, who some had pegged as the favorite going into the convention.

Jorgensen's task and the party around him is to "expand the tent" as he states on his website, and hold off the threat of the Democratic party and other challengers in Utah, even as the West has turned more blue during the past election cycles.

"Government was never designed to solve all of our problems," Cox said. "If we want smaller government, we need bigger people," he told the crowd in a sentiment repeated throughout the day as speakers challenged President Joe Biden's agenda that would cost trillions of dollars.

He encouraged Utah's GOP to engage in better behaviors — "instead of protesting at the home of a local health care leader," serve at the local food bank; and "instead of listening to another talking head on some radio or news program," engage a new neighbor in uplifting conversation.

Cox touted some of the state's accomplishments amid erratic boos and shouts from passionate Republicans in attendance, including low unemployment, kids in school the greatest number of days during the pandemic, and a stellar economy despite the ongoing threat of COVID-19 and the state's reaction to it.

He said, "I know some of you hate me for some of the decisions that have been made," but he encouraged all to come together.

"We are not a selfish party ... and it's time to act like it," Cox said on Saturday. The newly elected governor, whose approval ratings have continued to climb throughout his months-long administration, said he's made good on many of his campaign promises, including cutting taxes, cutting regulations and dealing with the pandemic.

He said that at the end of this school year, students will no longer be required to wear face masks, drawing strong positive reaction from the crowd.

"And there will be no more masks this fall. That is done," Cox said to widespread applause.

Government was never designed to solve all of our problems. If we want smaller government, we need bigger people.

The crowd at the Maverick Center in West Valley City turned on Sen. Mitt Romney when he appeared on stage, to the point of having to be told by outgoing party chairman Derek Brown to "be respectful."

"Aren't you embarrassed," Romney chided, adding that he knows some people don't like that stands he has taken.

Sen. Mike Lee, the senior senator from Utah, as well as Representatives Chris Stewart, Blake Moore and Burgess Owens also addressed the crowd, as well as Rep. John Curtis staff, garnering strong support as they expressed pride for the country and the Republican Party.

"We love our country, God, family and respect women and authority," Owens said, prior to denouncing racism and bigotry in his remarks.

Lee, who drew a standing ovation when he came on stage, thanked the crowd for being there.

"It's a sign that you have faith in our future ... that you're optimistic about our future," he said before criticizing U.S. President Joe Biden for increasing American dependence on government, and the Centers for Disease Control and Prevention for being "all about the control and not much about the disease."

Biden this past week addressed the nation and announced growth in government programs that would total trillions of dollars, drawing criticism from Utah's congressional delegation and the Republican side of Congress, as well as concern from some Democrats worried about the cost.

Owens, following Biden's speech, said: "The Democrats' progressive pet projects and disastrous policies come at the expense of hardworking taxpayers and future generations. To truly restore the soul of our nation, the president must stop governing from the far left and start representing all Americans," he said.

Curtis, who wasn't at the convention Saturday, had members of his staff talk about his accomplishments. They played video and radio messages from Curtis, after emphasizing that the congressman hopes Americans can debate and disagree, but respectfully.

"I am troubled by the thunder of contempt that surrounds us," Curtis said in one message, adding that such contempt "is tearing at the fabric of our democracy." He said people need to "speak with kindness, disagree with respect and listen" to others.

Freshman Rep. Blake Moore thanked the many who put him on the political path, then outlined his priorities — "military, public lands and county assistance," while pushing to bring down federal spending.

And, Utah Attorney General Sean Reyes, who also endured a mixed reaction from the crowd, said he has withstood various attempts from "cancel culture" to shut him down.

"I'm still here, fighting for you," he said.

Delegates voted on whether to censure Romney for his votes to impeach Pres. Donald Trump during two different impeachment trials. 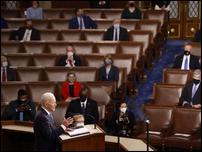 Members of Utah's all-Republican congressional delegation say President Joe Biden has not only failed to deliver on his promise to unify the country but has made it more partisan than ever.

"Mitt Romney's votes to impeach President Trump and remove him from office hurt our party," said Davis County delegate Don Guymon, who wrote the resolution. He said Romney's actions "emboldened" Democrats to continue to harass Trump throughout his presidency.

The resolution, however, narrowly failed on 798 to 711 vote.

"If the point of this censure is to let Romney know we're displeased, I promise you, he knows," Utah County delegate Emilie de Azevedo Brown told the crowd.

Jorgensen, who won by more than 50 percent during a second delegate vote, said he was ready to do things differently in the state. He'll be joined by Jordan Hess, who was elected as the party's vice chairman with Olivia Dawn Horlacher named as the new secretary and Michael Bird, who ran uncontested, as treasurer.

"We want to keep the state red. We want to make sure there is a place in this party for everyone," Jorgensen said Saturday after he was named as the new chairman.

In an interview with Deseret News reporter Katie McKellar earlier in the week, Jorgensen brought forth his background and his views.

Jorgensen is from Mount Pleasant in Sanpete County, a sixth-generation sheep rancher in a family that's lived in Utah for more than 150 years, he said. His family businesses are Skyline Sheep Co., as well as Skyline Bit and Spur, a small business that ships horse bridles and silver.

His family's heritage, Jorgensen said, tells the story of "why this race is important to me."

"We rely heavily on public lands," he said, describing how the sheep industry helped build Utah's infrastructure. So that's why he's getting involved in politics, he said.

"Unfortunately, politics shapes a lot of these things," he said. "Politics is getting increasingly militant around agriculture, and if we don't start taking a key role in policy, agriculture is going to be one that is going to lose out big time, especially here in Utah where 75% of the state is federal land and most of it is used for agriculture."

Jorgensen pointed to Biden's "30 by 30" climate change policy and said "it's going to drastically affect the agriculture sector here in Utah and it's going to ruin the legacy of my family."

So, Jorgensen said he wants to get involved to save the future of agriculture and public lands in Utah.

"I don't want to see the history of Utahns thrown under the bus for progressive policy," he said.

It's not the first time Jorgensen has stepped into politics. Last year, he sent a letter to then-Vice President Mike Pence, members of Congress and others detailing the impacts to sheep ranching of the acquisition of a Colorado lamb processing facility, which led to an investigation. Jorgensen also ran an unsuccessful bid against Rep. Stewart last year.

Correction: A previous version mentioned Rep. Chris Stewart wasn't at Saturday's convention, but it was Rep. John Curtis who was absent.