"It is actually a public health crisis," Biden said during remarks at the White House.

Greeting the families of gun violence victims and activists, he assured them: "We're absolutely determined to make change."

A recent spate of mass shootings have again ignited debate over reforming the nation's gun laws.

Even before the unrelated killing sprees in Atlanta and in Boulder, Colorado, within a week of each other left 18 people dead in March, the Democrat-controlled House passed two gun safety bills, including one that would require background checks on all firearms sales and transfers.

Most Republicans, including all four of Utah's congressmen, opposed those bills, which don't appear to be going anywhere in the Senate where they would need 60 votes to pass.

"Today, President Biden told America that his gun control actions do not infringe on the Second Amendment," Stewart said in a statement. "In his next breath, he claimed that no amendment to the Constitution is absolute. Simply put, protecting the right to bear arms in name alone is not enough.

"The right of Americans to defend themselves and their families is fundamental. The Biden administration needs to focus on helping those with mental illness and stopping criminals from committing crimes, not restricting the rights of law-abiding citizens." 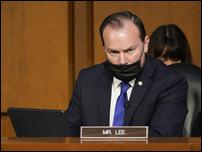 "Sen. Romney made a commitment to the people of Utah during his campaign that he is open to updating the current background check system but that he would not vote for new federal gun legislation," said Romney spokeswoman Arielle Mueller in a statement. "He believes that it's not appropriate for the federal government to tell states what to do with their gun laws, and that it should be left up to state legislatures to decide."

"I'm concerned that our president seems to believe that no amendment to the Constitution is absolute," Owens said in a statement. "Any changes that weaken the power and scope of the Second Amendment must go through the legislative process in Congress, not through unilateral executive orders or federal agencies."

"Too many Americans die from gun-related violence each year, and I am devastated by the recent shootings our nation has mourned together," Moore said in a statement. "I believe we must come together to diagnose the causes of these tragedies so that we can solve this problem.

"However, President Biden's unilateral gun control proposals do not accomplish this goal. They would do little to curb the root causes of gun violence and could instead place onerous restrictions on law-abiding Americans. If actions are to be taken at the federal level, they should be subject to rigorous debate in the halls of Congress."

"I support efforts like the STOP School Violence Act, the Fix NICS Act, the Prosecuting Gun Crimes Saves Lives Act, and widely available mental health resources. I will continue to advocate for legislation that keeps firearms out of the hands of criminals while protecting law-abiding Americans' Second Amendment rights."

Current law calls for background checks only for those buying guns from a federally licensed dealer. But a significant amount of guns are purchased through private, unlicensed sales.

Among Democrats, 86% favored universal background checks compared to 47% of Republicans.

Thursday's announcement underscores the limitations of Biden's executive power to act on guns. They include moves to tighten regulations on homemade guns and provide more resources for gun-violence prevention, but fall far short of the sweeping gun-control agenda Biden laid out on the campaign trail.

Biden is tightening regulations of buyers of "ghost guns" — homemade firearms that usually are assembled from parts and milled with a metal-cutting machine and often lack serial numbers used to trace them. It's legal to build a gun in a home or a workshop and there is no federal requirement for a background check. The goal is to "help stop the proliferation of these firearms," according to the White House. The Justice Department will issue a proposed rule aimed at reining in ghost guns within 30 days, though details of the rule weren't immediately issued.

A second proposed rule, expected within 60 days, will tighten regulations on pistol-stabilizing braces, like the one used by the Boulder, Colorado, shooter in a rampage last month that left 10 dead. The rule will designate pistols used with stabilizing braces as short-barreled rifles, which require a federal license to own and are subject to a more thorough application process and a $200 tax.

The department also is publishing model legislation within 60 days that is intended to make it easier for states to adopt their own "red flag" laws. Such laws allow for individuals to petition a court to allow police to confiscate weapons from a person deemed to be a danger to themselves or others. The department also will begin to provide more data on firearms trafficking, starting with a new comprehensive report on the issue.

The administration says that hasn't been done in more than two decades. Biden is also nominating David Chipman, a former federal agent and adviser at the gun control group Giffords, to be director of the Bureau of Alcohol, Tobacco, Firearms and Explosives. The Biden administration will also make investments in community violence intervention programs, which are aimed at reducing gun violence in urban communities, across five federal agencies.

Officials said the executive actions are "initial steps" completed during Garland's first weeks on the job and more may be coming. The ATF is currently run by an acting director, Regina Lombardo.

Gun-control advocates have emphasized the significance of this position in enforcing gun laws, and Chipman is certain to win praise from this group. During his time as a senior policy adviser with Giffords, he spent considerable effort pushing for greater regulation and enforcement on ghost guns, changes to the background check system and measures to reduce the trafficking of illegal firearms.

Chipman spent 25 years as an agent at the ATF, where he worked on stopping a trafficking ring that sent illegal firearms from Virginia to New York, and served on the ATF's SWAT team. Chipman is a gun owner. He is an explosives expert and was among the team involved in investigating the Oklahoma City bombing and the first World Trade Center bombing. He also was involved in investigating a series of church bombings in Alabama in the 1990s. He retired from the ATF in 2012. The White House fact sheet said Chipman has worked "to advance common-sense gun safety laws."

During his campaign, Biden promised to prioritize new gun control measures as president, including enacting universal background check legislation, banning online sales of firearms and the manufacture and sale of assault weapons and high-capacity magazines. But gun-control advocates have said that while they were heartened by signs from the White House that they took the issue seriously, they've been disappointed by the lack of early action.

With the announcement of the new measures, however, advocates lauded Biden's first moves to combat gun violence.

"Each of these executive actions will start to address the epidemic of gun violence that has raged throughout the pandemic, and begin to make good on President Biden's promise to be the strongest gun safety president in history," said John Feinblatt, president of Everytown for Gun Safety.