Many families lack closure with cold case backlog across US

SALT LAKE CITY — The launch of a new season of the KSL podcast COLD this week highlights one of the plights of families whose loved ones disappeared or were murdered: they have to wait because the United States has a cold case backlog.

Season 2 of COLD focuses on the disappearance of Joyce Yost. In 1985, her rapist told her he would tear her throat out if she went to the police; she went anyway. A man named Doug Lovell eventually confessed to Yost's murder. He received the death penalty. But he continues to fight his conviction to this day.

Yost's body was never found. Neither was that of Susan Powell, the subject of COLD's first season, who vanished from West Valley City in 2009.

They represent just a fraction of the families awaiting closure after years of frustration from the cold case backlog.

The FBI's annual review of missing person statistics revealed nearly 90,000 active and open missing persons investigations in the US in 2020.

Karra Porter, co-founder of the Utah Cold Case Coalition, says on top of the number of people who have missing loved ones, the United States currently has thousands of unidentified bodies, John and Jane Does, whose identities could potentially provide answers and closure.

"There's 14,000 people, and the bodies are there. They just haven't been identified," she said.

She's calling on the government to do more to identify those remains to bring closure to families.

For the families directly affected, she says they become desperate — sometimes so much so, they will blame anyone.

"Or they start to internalize their fear and their sadness, and I've seen situations where the family never recovers," Porter said. "It eats at these families, it's mentally and physically exhausting." 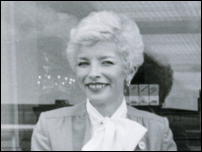 Joyce Lynn Yost disappeared from her apartment here on an August weekend in 1985. She is believed to be dead, killed by a man who was intent on keeping her from testifying against him in a criminal trial.
×