SALT LAKE CITY — The volume of claims for jobless benefits rose for the third consecutive week, a new report shows.

The Utah Department of Workforce Services reported Thursday the number of total new claims filed for unemployment benefits registered at 3,976 for the week of March 21 through March 27 — up from 3,403 the previous week.

Data shows a total of 28,388 continued claims filed during the most recent seven-day period.

The number of individuals who have not requested a benefit for two consecutive weeks as of March 20 totaled 2,046, down from 2,330 individuals who met the same criteria during the previous week. 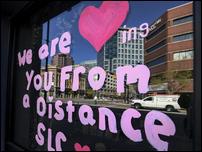 A new program hopes to help more businesses recover from the COVID-19 pandemic.

"We continue to see an overall decline in continued claims, with continued claims having decreased for eight consecutive weeks and down nearly 20% from the end of January 2021," said Unemployment Insurance Division director Kevin Burt.

"The critical unemployment benefit is and has provided some short-term stability; however, the strong economy is helping people find long-term stability in employment."