SALT LAKE CITY — Veteran diplomat and former Utah Gov. Jon Huntsman Jr. likely knows China as well as anyone in the domestic political arena of the moment, and on Wednesday warned the U.S. has little power to curb the superpower's growing economic might.

"The U.S. has very little leverage in dealing with China these days," Huntsman said. "At least in ways that won't come back to injure or harm us even more. For this reason, U.S. policymakers are increasingly having a tough time trying to deal with tools that can be used in checking China's power."

His comments came during a Wednesday online panel hosted by World Trade Center Utah and focused on China policies and issues of concern to U.S. businesses. The first hour of the two-part event featured Huntsman along with former deputy national security adviser (and Utah resident) Matthew Pottinger in a discussion moderated by WTC Utah President and CEO Miles Hansen with Deseret News Opinion Editor Boyd Matheson.

Huntsman, who served as U.S. ambassador to China from 2009 to 2011, as well as previous ambassadorships with Singapore and Russia, said China has undergone a quantum leap since he first visited the country as a staffer for President Ronald Reagan some 40 years ago. Since that time, he noted Chinese per capita incomes have grown by a factor of 25x, average life expectancies have improved by 10 years, capitalism has flourished, and while just 1% of Chinese markets were open for direct foreign investment at that time, that segment has ballooned to 60%.

Huntsman advises businesses that are considering, or are already obligated in, engaging economically with China should do so with caution and vigilance.

"First and foremost, be realistic and understand the risk and make sure you have a regional hedging strategy that allows you to not just understand the state of play between the U.S and China but the rest of the world and China," Huntsman said. "And, as you engage economically, be prepared for any eventuality.

"Because I'm not sure anyone can write the final chapter on how this relationship will play out over the rest of the 21st century. Unexpected things are going to happen, both out of Beijing and out of Washington."

Our companies in the U.S. are an extension of our national values and our individual values, and that's a good thing.

Pottinger said China's just-released economic five-year plan is focused on decreasing the country's reliance on goods and materials it must import while making sure the country remains an essential part of the supply chain for the rest of the industrialized world.

"The reason why China wants this strategy of making the world dependent on China and a China not dependent on the world is in order to have coercive leverage, in the form of economic leverage ... to pursue political aims around the world," Pottinger said.

Huntsman said one of the most effective ways to push back against China's efforts to extend political influence via economic dominance is through U.S. businesses themselves and their roles as de facto emissaries on behalf of American values.

"Our companies in the U.S. are an extension of our national values and our individual values, and that's a good thing," Huntsman said. "Obviously, China is going to be concerned about companies that propagate U.S. values or are seen as a front for overt U.S. values, but that isn't something we should shy away from. 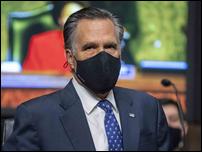 Sen. Mitt Romney's call for an economic and diplomatic boycott of the 2022 Olympics in Beijing isn't surprising given his political stances on China.

But Huntsman also pointed out an area in which China is regularly outperforming the U.S. and one that is helping drive the country's streak of economic growth and expansion.

"China is very big on strategies and we are not in the U.S. which is one of our big problems," Huntsman said. "They stick to their strategies and learn from the world what works and what doesn't."

Huntsman said he's been able to experience a China that's harder for outsiders to see, one that exists on the other side of the veil of political rhetoric. He noted the country's population of nearly 1.4 billion consists of some 50 minority groups and represents a culture that is nuanced, dynamic and, as he described it, "a beautiful tapestry." And, he said, it's a group of people who are not paying universal fealty to the government of President Xi Jinping.

"What you find is real pockets of dissent," Huntsman said. "The further away you get, the more Beijing becomes irrelevant."

Both Huntsman and Pottinger noted their beliefs that there is room for cooperation between the U.S. and China that could open the doors to advancing the relationship between the world's two foremost economic giants, and that environmental issues, the fight against COVID-19 and potential future pandemics, and efforts to stem nuclear proliferation all are areas where collaborative energy can be built.

But Huntsman said those pursuits should not come at the cost of U.S. principles.

"We have core values as a nation and they extend to our foreign policy, our economic engagement, our humanitarian policies ... and we should never back down from our traditional values," Huntsman said. "The Chinese are looking for us to do that and that would be a display of weakness and, moreover, (should that occur) we will cease to become a guiding light in the world that many are looking up to."

Hansen said that over the past five years it has become increasingly clear that rather than moderating, China is becoming more adversarial as it pursues policies that are antithetical to American values and interests, ushering in an era of increased U.S.-China competition, particularly on trade and investment issues. According to Hansen, the size of the Chinese market means many U.S. businesses will continue to find ample incentive to source from or sell into China, but they must proceed with a risk mitigation strategy and a clear-eyed perspective of the costs and benefits.

"Given the tectonic shifts happening in the U.S.-China relationship and the wide-ranging implications these dynamics have on trade and investment, it is essential that Utah companies get the very best advice on how to manage their interests in China," Hansen said. "We are fortunate to have some of the smartest experts and leaders on China right here in Utah, including Ambassador Huntsman and Matt Pottinger."

World Trade Center Utah's virtual event series, The China Paradox, continues with two more panels in the coming weeks. Further details on those events, and how to become a participant, can be found at wtcutah.com.