SALT LAKE CITY — Sen. Mitt Romney's call for an economic and diplomatic boycott of the 2022 Olympics in Beijing isn't surprising given his political stances on China.

In his first speech on the Senate floor after taking office in 2019, the Utah Republican shifted his focus from Russia to China as America's greatest geopolitical adversary. While running for president in 2012, he argued that Russia presented the biggest threat to the United States.

Romney said China's economic strength and large population enable a military power that "could eclipse our own."

"It is possible that freedom itself would be in jeopardy," he warned. "If we fail to act now, that possibility may become reality."

In his first two years in the Senate, Romney filed legislation to combat China's economic aggression, condemned the Chinese Communist Party and sought sanctions over abuses of ethnic minorities. He pushed for a National Security Council task force to counter the Chinese government's "sinister propaganda" about the origins of the coronavirus

"We must take decisive action now to confront China's growing aggression, which includes linking arms with our friends and allies to dissuade the Chinese Communist Party from its predatory policies and demand that China abide by the norms and rules which the rest of us follow," he said.

The Senate Foreign Relations Committee, of which Romney is a member, will hold a hearing on the issue this week. 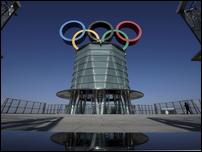 President Joe Biden is under growing pressure from hawkish Republicans to use the 2022 Winter Olympics to punish the Chinese government over its human rights abuses, Politico reported.

Some are calling on Biden to outright boycott the Beijing Games. Others, like Romney, say they oppose boycotts, arguing that only the athletes get punished. Many are instead pressing Biden to push the International Olympic Committee to revoke China's role as host and hold the Games in another country.

The Biden administration, which identified China as one of its biggest foreign policy challenges, has been unwilling to take a stand on the subject, but it says it is talking to other countries about it, according to Politico.

In an op-ed in the New York Times on Monday, Romney urged American spectators to boycott the 2022 Winter Games saying prohibiting athletes from competing is "the easy, but wrong, answer."

"Let us demonstrate our repudiation of China's abuses in a way that will hurt the Chinese Communist Party rather than our American athletes: reduce China's revenues, shut down their propaganda, and expose their abuses. An economic and diplomatic boycott of the Beijing Olympics — while proceeding with the Games — is the right answer," he said.

"These revisions will only continue to advance Beijing's ever tightening grip on Hong Kongers' autonomy, basic freedoms, and fundamental human rights," according to a joint statement. "With these planned actions, the Chinese Communist Party is doubling down on its attempts to impose an authoritarian system on Hong Kong."

Democracy is essential to the prosperity and well-being of people around the world. Yet, we're seeing the global retreat of freedom. We must focus on our soft power and link arms with like-minded nations to promote democracy, countering the malevolent efforts of Russia and China. pic.twitter.com/9HqIL07wbd

When China was admitted to the World Trade Organization, the expectation was that it would embrace the rules of the global order, including, eventually, respect for human rights, Romney said earlier.

But, he said, it has done the opposite, imprisoning millions in re-education camps; brutally repressing dissent; censoring the media and internet; seizing land and sea that don't belong to it; and flouting the global rules of free and fair competition. China also promotes authoritarianism and protects dictators like Kim Jong Un and Nicholas Maduro, Romney said.