SALT LAKE CITY — Utah's mask mandate, for the most part, will expire on April 10 — but that doesn't mean everyone should celebrate the day by throwing away their masks, a public health expert advised.

The date the state's mandate ends was determined by a bill that passed through the state Legislature last week. Lawmakers said the date had the blessing of Gov. Spencer Cox and the Utah Department of Health. The governor confirmed last week that he supported the bill's mandate deadline, although he has yet to officially sign it.

Some portions of a mandate could exist beyond April 10, such as masks in businesses or schools, but HB294 also put a July 1 deadline for all public health orders.

Even as the April date draws nearer, several health experts have urged individuals to use caution in public settings. That includes Dr. Todd Vento, an infectious disease physician for Intermountain Healthcare. It's why he advises Utahns to continue wearing masks on and after April 10, especially while in public indoor spaces with less ventilation.

"Honestly, I would say there's no difference between April 9 and April 10; it's a random date," he said, before acknowledging stipulations that extend parts of the mandate beyond April 10.

It's worth noting there are stipulations that would keep some requirements in place between April 10 and July 1. For instance, face coverings still could be required for events and locations with more than 50 people beyond April 10. That includes businesses and schools. 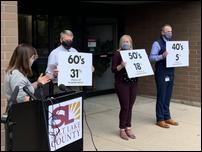 Salt Lake County Mayor Jenny Wilson is uncomfortable with the notion of dropping the statewide mask mandate by April 10; her concern is for unvaccinated people.

State or local health orders could remain in place up until July 1 if the state's 14-day case rate is above 191 per 100,000 people, the state's seven-day intensive care unit utilization tied to COVID-19 is above 15%, or the state remains below 1.63 million prime doses of allocated COVID-19 vaccine.

"I wouldn't look at April 10 as anything different from my own personal protection and for others' personal protection," Vento added. "If I'm not in public, I should probably be careful if I go in a place that has 100% occupancy now and I don't know about their ventilation system and people aren't wearing masks, because we don't have a large portion of our population vaccinated and they're still at risk even though we have lower cases and less virus than, say, we had after Thanksgiving (and) after Christmas.

"The reality is we still have the virus. We still have a 500-plus seven-day rolling average, and we still have — depending on what stat you use — 4% or 8% … test positivity," he continued. "Those were numbers that we had when we were on lockdown, so I know we've changed a lot. Like, we've accepted a lot because folks want to get back to work and want to have normal. The reality we have in front of us is the reality we have to address, not the reality we want it to be. We have to work toward that reality, and so I would encourage folks to continue to use these precautions until (more herd immunity is reached)."

The adjusted mandate expiration date came just weeks after the Utah Department of Health had announced criteria to end the mask mandate in the state. State officials said they would start to incrementally remove the mandate in counties of low transmission after the state had received a little more than 1.63 million allocated prime doses. A prime dose is considered the first dose of the Pfizer-BioNTech or Moderna vaccines, or the one-dose Johnson & Johnson vaccine.

State health department officials said that the 1.63 million prime-dose target represents about 70% of Utah's adult population. Health experts have said 70% to 90% of herd immunity would likely need to be reached to put an end to the pandemic.

While the state does plan to make the vaccine eligible to every Utah adult on April 1, Cox's staff estimated this week that Utah would have about 1.5 million vaccines allocated by April 10, which falls just shy of 70%.

Vento said there is also still "a lot" of people hesitant to receive the vaccine. These include cultural, religious, access or mistrust barriers. Lt. Gov. Deidre Henderson last week announced Utah's new vaccine "roadmap" aimed to close some of the gaps, especially regarding access.

"We're not going to get to 90% of vaccinated. We're still estimating 70% to 80% as our estimated herd immunity — most of which will be vaccine-induced herd immunity because we're not sure how long natural immunity will last," Vento said.

The Centers for Disease Control and Prevention did release new guidelines this week about when the masks can come off. The guidelines state that people who are fully vaccinated — having received both shots of a two-shot vaccine or the Johnson & Johnson vaccine — can gather indoors with other fully vaccinated people or gather indoors with unvaccinated people from another household without a mask if the person isn't or doesn't live with someone at increased risk for COVID-19.

The biggest concern, according to Vento, is that governments have and will continue to relax restrictions before a better herd immunity is established. That not only produces the risk for new spread but the risk that the SARS-CoV-2 virus will mutate beyond the strains that vaccine manufacturers have already become "really worried" about.

That's why he, along with other public health experts in Utah and around the U.S., urges people to get the vaccine as soon as it becomes available to them.

Why does Utah have fewer confirmed variants?

Vento addressed all sorts of questions about the pandemic during the virtual question-and-answer session with members of the media Friday, including those about variant strains of the coronavirus and how they could affect vaccination efforts.

This week, the state health department began to report findings of three variants of the coronavirus that causes COVID-19. The data updated Friday showed that 67 cases of the "United Kingdom" strain have been found in Utah, with no confirmed cases of the "South Africa" or "Brazil" strains. It had listed 33 U.K. variant cases Thursday.

The South Africa strain, officially called B.1.351, is the variant that prompted Moderna to begin a trial of an updated vaccine to ensure that it protects people as efficiently as the primary strain that emerged in late 2019.

So far, there's a lot of good data about a lot of the use of our therapeutics and also our vaccines that there should be responses but there's also some data that makes us maintain that caution, especially with that strain from South Africa.

Vento said one reason why the number of variant cases in Utah is low is that the U.S. hasn't tested for variants as much as other counties across the globe, especially compared to Europe. That's on top of some geographic division between the continents where the three largest variants have emerged.

Of course, there are other strains of the coronavirus. Vento said Friday there are known cases of what's known as the "California variant" in Utah and a few other variants. Those strains aren't currently reported in the health department data and they aren't as well studied in terms of their impact on vaccination efficacy.

He said he wanted to acknowledge the current facts on variants to provide a full scope of the COVID-19 situation and not provide an outlook that's either "doom and gloom" or sugarcoated.

"(It's) just reality. RNA viruses mutate, and a lot of those mutations don't do anything. Some of those mutations actually improve the fitness of the virus and make it easier for the virus to bounce around in the community," he said. "So far, there's a lot of good data about a lot of the use of our therapeutics and also our vaccines that there should be responses, but there's also some data that makes us maintain that caution, especially with that strain from South Africa."

COVID-19 beyond the pandemic

Vento also addressed the possible future after COVID-19 is no longer a pandemic, and he said that future could very well mean at least another vaccine "booster shot."

Keep in mind, the drug manufacturers behind the vaccines still haven't concluded their studies on the vaccines. They have about eight to 10 months of data from 100,000 individuals that will help figure out exactly how long the vaccine offers protection from the coronavirus, Vento pointed out Friday.

That means it's still not known if the vaccine is a one-time deal or will become a yearly vaccine like the flu. There's also some theory that another dose could help against new COVID-19 variants. While all those are possibilities, there are still a lot of unknowns.

What Vento advised on Friday is that people could "count on" the fact that the current vaccination effort won't be the end of COVID-19 vaccines.

"I would expect, and I think people should expect they'll need some sort of additional vaccine at some sort of time," he said. "Whether that's every year, every two years — or if we get a big surge of a new type of variant, we might find we need 'Moderna-type 2' as our next vaccine. Those kinds of practices."