SALT LAKE CITY — After Meghan Markle sent shock waves across the globe Sunday night as she revealed her struggles with suicide ideation, mental health experts in Utah say her story could reduce stigma to an issue faced by so many.

As she joined the British royal family, tabloids began targeting Markle — the former actress from the U.S. who married Prince Harry — with racist, sexist headlines. The media attacks hurt her friends and family and sent her into depression, she recalled.

Markle said she felt the hateful articles would end if she no longer existed.

"I knew if I didn't say it, that I would do it. I just didn't want to be alive anymore. And that was a very clear and real and frightening, constant thought," Markle told Oprah Winfrey during the bombshell interview on CBS.

When Markle let "one of the most senior" officials in the royal institution know that she needed help, she said she "was told that I couldn't" because of how it would look for a member of the family to receive mental health assistance.

Her struggles led the couple to eventually move with their toddler son to the United States and step away from their official roles in the royal family.

Advocates in Utah praised the Duchess of Sussex for her courage in speaking out.

"First of all, I think it was so brave and important what Meghan Markle did, which was talking about her own personal struggles," said Rachel Lucynski, crisis services business operations manager at the Huntsman Mental Health Institute.

"Really in Utah and throughout our country, I think a lot of stigma still exists around having struggles with mental health and people thinking that any type of mental health challenge or mental illness is a personal defect or flaw," she said.

In Utah, suicide rates have neither improved nor worsened in the past few years, said Michael Staley, suicide prevention research coordinator with the Utah Office of the Medical Examiner.

In 2019, a Kem C. Gardner Policy Institute report found that Utah has the fifth-highest suicide rate in the nation and fewer mental health professionals compared to nationwide averages. 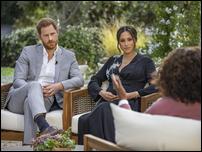 In a wide-ranging interview aired Sunday, Harry and Meghan described painful palace discussions about the color of their son's skin, losing royal protection and the intense pressures that led the Duchess of Sussex to contemplate suicide.

Staley said the "key" in Markle's story is that she recognized what she was feeling and sought help.

"It wasn't a story of hopelessness that, you know, she felt suicidal and I still feel suicidal and nothing is helping, because that's a pretty despairing story to tell," Staley said.

"She gave a different story, that there's hope. So I think that does probably have a pretty good impact on people who are feeling that way and who feel like they have very few options left, or they feel like they've tried everything. And maybe this is a call to maybe they haven't tried the one thing that will work — keep going," he said.

Mental health issues can be caused by not only neurological and biological factors, but environmental and situational stressors that can affect anyone, like job loss, divorce, illness or loss of a loved one, according to Lucynski.

"And so really, suicidal thoughts could affect anyone at any given time, really, and I think that having someone with so much prominence and public status talking about these things helps reduce the stigma around acknowledging that sometimes life can be really hard and overwhelming," Lucynski said.

That includes those in positions of power and wealth, she said, explaining that even someone with "status, beauty and public recognition" like Markle "is human too" and can struggle.

"I think her story is a reminder that our world has a long way to go toward recognizing and supporting people with suicidal thoughts or other mental health issues," she said.

Stigma is a major barrier for people finding help, and it can occur at many different levels — even in an institution like the British monarchy. Stigma affects those suffering from mental illness, their families, and those trying to raise awareness.

Suicidal thoughts could affect anyone at any given time, really, and I think that having someone with so much prominence and public status talking about these things helps reduce the stigma around acknowledging that sometimes life can be really hard and overwhelming.

"I think really, this story and situation reminds us that addressing stigma around suicide and mental health can bring enormous benefits not just to individuals, but entire communities," Henn said.

Markle's story should serve as a reminder of the importance of family support for those facing mental health struggles. Those who hear calls for help should respond in a "constructive, empathetic and nonjudgmental" way, according to Henn.

Like Markle, many new moms throughout Utah experience postpartum depression and other mental illnesses brought on by pregnancy. According to data from the Utah Department of Health, 43% of Utah women with a recent live birth experienced depression or anxiety.

"Experiencing some of these challenges during and after pregnancy as Meghan clearly has been are really important for us to be aware of and be on the lookout for to be able to help friends, family, patients and more," Henn said.

Benee Larson, program director with National Alliance on Mental Illness-Utah, said the story also shows the impact that bullying and shame can have on anyone, regardless of position.

Although the topic of suicide can be uncomfortable for many, Larson urges people to take trainings offered by the Utah Suicide Prevention Coalition on LiveOnUtah.org to recognize and help those who are suffering from thoughts of suicide.

"I think the more that we learn, the better we are at being kind," Larson said.

The Utah Department of Health also offers suicide prevention help at utahsuicideprevention.org/suicide-prevention-basics. The National Suicide Prevention Hotline is 1-800-273-8255. Help is also available through the SafeUT app.